Charter to keep 'some' democratic features

Chief drafter Meechai Ruchapan is considering an unelected prime minister and senate in the next constitution, with "some" democratic features. (Photo by Apichart Jinakul)

Constitution Drafting Committee (CDC) chairman Meechai Ruchupan has indicated that a non-elected outsider will be allowed to become prime minister under the new constitution.

However, the outsider must be chosen and endorsed by the House of Representatives.

Speaking in an exclusive interview with the Bangkok Post, Mr Meechai said the new CDC has not concluded that a premier will only be chosen from among elected MPs.

The CDC is still open to the option of allowing a non-MP outsider to become prime minister, but the way the non-MP premier is chosen must be acceptable to the public, Mr Meechai said. 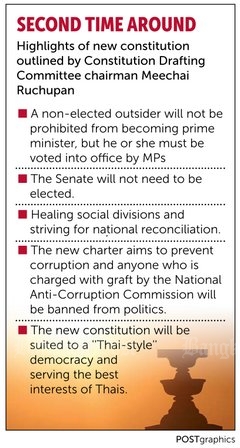 "Many often say that it is not democracy if a non-MP becomes prime minister. So, let the MPs choose an outsider prime minister," he said.

Mr Meechai pointed out potential problems that may arise if a charter allows only an MP to be prime minister.

A problem could occur if the House of Representatives decides to pick a "nobody" MP to lead the government.

Mr Meechai said that MPs come from a variety of backgrounds, ranging from highly-qualified people to mediocre ones.

"What if the House chooses an MP who is a chauffeur and a nominee acting on behalf of someone to become a prime minister," Mr Meechai said.

Regarding the composition of the Senate under the new constitution, Mr Meechai said the charter drafters will try to ensure the Senate will not end up being a "second House of Representatives".

"I cannot think of a way now. But an election is not always necessary [for the Senate]," said Mr Meechai, who is a former Senate speaker.

Mr Meechai admitted the 180-day time frame is tight for the charter drafting, although the draft charter rejected by the previous CDC and reform proposals by the now-defunct National Reform Council can serve as the basis for drawing up the new charter.

The new CDC will also add new features to the draft charter and ask the public to provide feedback on them.

As a prominent legal expert, Mr Meechai is considered one of the leading constitution drafters in the country.

But he has been criticised by anti-coup groups for serving several times under coup-installed administrations.

Among his past jobs, he was appointed by the Feb 23, 1991, coup maker, Gen Sunthorn Kongsompong, to chair a panel to write the 1991 charter which would allowed non-elected people to become prime minister.

After the Sept 19, 2006, coup which ousted the Thaksin Shinawatra administration, Mr Meechai was picked by coup leader Gen Sonthi Boonyaratglin to draft an interim charter.

For the new charter under the Prayut Chan-o-cha government, Mr Meechai gave assurances that the CDC will aim to finish the draft charter within the time frame, which ends on April 1 next year.

"The draft charters aim to design a democracy that is best suited to the country and to the Thai people and insist they will not copy models of democracy from other countries," the CDC chairman said.

"Some" democratic features will still be retained in the new charter such as elections, elected MPs and an elected government, he said, adding that some parts of the new charter may be similar to those of other countries while other parts may be different.

Asked about a so-called crisis panel which can overrule an elected government in case of a political crisis, as proposed by the previous CDC, Mr Meechai said such a panel may not be necessary if the new charter prescribes what future elected governments must do to carry on with reform and reconciliation efforts initiated by the current government.

"We will try to avoid creating a state within a state", Mr Meechai said.

He added the CDC is also considering a measure to ensure future governments will be held accountable and maintain financial discipline when they seek loans.

When it comes to mending social divisions and fostering national unity, Mr Meechai described it as a tough task.

He stressed the need to get to the bottom of what caused the conflicts.

He disagreed with a proposal by some peace advocates that forgiveness is a way out of the conflict.

"If we forgive today, fighting may resume tomorrow," he said.

Mr Meechai said he is open to the opinions of all parties involved in the political conflict, adding the charter drafters will find ways to solve the conflict based on their input.

Mr Meechai also said the CDC will try to keep the new constitution short and "dynamic" without too much detail.

However, the CDC may still have to provide detailed information on charter clauses regarding the electoral system, because if future governments are allowed to amend the new charter to determine how elections should be held, they are likely to turn situations to their own advantage, Mr Meechai said.