Sahamongkol Film is working on a new cut of the movie, in an effort to produce a version that will satisfy the censors and get it into theatres. (Posters courtesy Sahamongkol Film International)

The studio that produces the banned film Arbat is working on a new cut to placate the censors and will submit the re-edited version to the committee by Friday, says the publicist.

On Monday, the censor board attached to the Ministry of Culture banned the film that features a young monk in a sexual relationship as well as other misconduct. The board said it wanted to protect the image of Buddhism and "prevent trouble".

Sahamongkol Film International, the producer, says it has taken into consideration the comments.

"We are toning down the parts that are controversial," said the company's publicist, who asked not to be named. "We expect to submit it to the board again this week. Our priority is to get permission to release it as soon as possible."

Arbat is the third film to be banned under the much-contested Film Act 2008. In 2010, Insect in the Backyard, which tells the story of a transvestite father and his two children, was banned for obscenity and depiction of student prostitutes; the film's director, Tanwarin Sukkhapisit, filed suit against the censors at the Administrative Court. The case is pending.

In 2012, the satirical film Shakespeare Must Die was banned for its political allegory that the censors believed might "cause disunity in the nation". The filmmaker, Ing K, also took court action against the censors. That case is also pending.

In 2013, Boundaries, a documentary about the Thai-Cambodian border conflict, was initially banned, though the order was lifted two days later as the filmmaker agreed to cut out two seconds of background sound which the censors deemed inappropriate.

Also in 2013, the political documentary Paradoxocracy, which chronicles Thailand's political evolution, was ordered to black out text referring to the Khana Rassadorn movement's statement after the 1932 Revolution. A few words spoken by interviewees in the film were also muted.

The 2008 Film Act, passed by the coup-appointed National Legislative Assembly, replaced the 1930 Film Act. The law introduced a rating system, though the industry objected, saying it still allows bans. 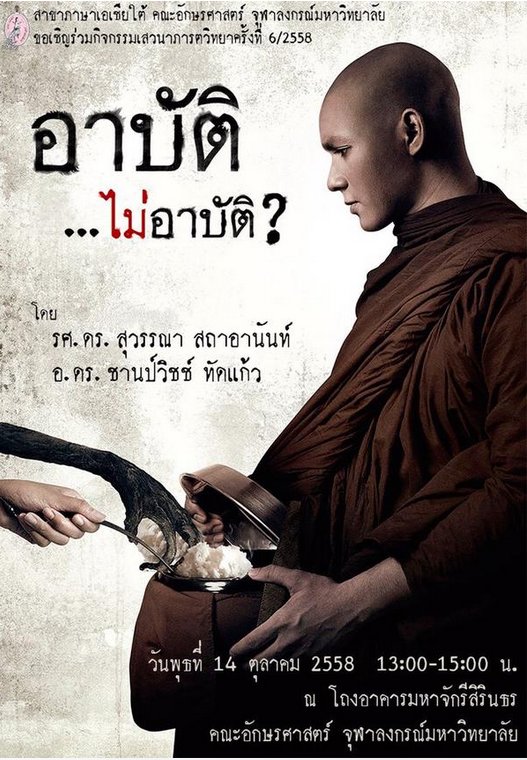 This poster has the date and time of the of the movie premiere, which has been pushed back - perhaps to forever.