What the vote means for Thailand
World

What the vote means for Thailand

Irrespective of who wins the Myanmar election in two weeks' time, the result is expected to have a significant impact on Thailand in the areas of border security, labour and economic cooperation. 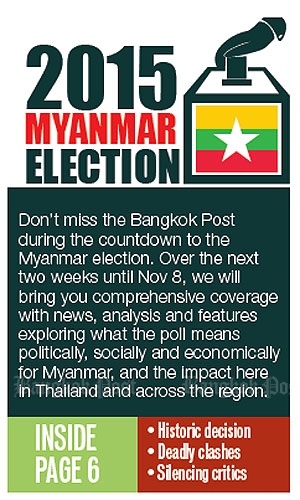 The ruling Union Solidarity and Development Party has vowed to reform the charter and move toward a federal state to address conflict among ethnic groups, many near the Thai-Myanmar border.

A major policy platform of Aung San Suu Kyi’s opposition National League for Democracy is job creation. The NLD says a lack of employment opportunities has been a failure of the current government, forcing Myanmar workers across the border to look for employment.

According to Thanit Sorat, founder and former secretary-general of the Thai Myanmar Business Forum, about 1.6 million documented Myanmar migrants now work in Thailand, while a further 1.6 million are unregistered.

“Many workers don’t have a passport or even an ID. Thailand and the new government of Myanmar will have to work together to oversee these migrants,” he said.

The economic role Thailand will play within Myanmar under a new government may not prove to be as significant. Once the number one foreign investor, largely because of PTT's 26-year involvement in the energy sector, Thailand's clout has slipped as Myanmar's economy opened up after 50 years of isolation.

Myanmar's Directorate of Investment and Company Administration says Thailand accounted for 6.69% of foreign investment as of last month. This consisted of 51 enterprises with US$3.16 billion (112 billion baht) worth of approved investment.

“Thailand’s ranking is not significant," Mr Thanit said. "In fact, it shows Myanmar has increasingly gained confidence from many foreign investors in terms of trade and investment.”

He said Thai investment in Myanmar has diversified from the energy sector, citing the recently-signed Memorandum of Intent between Japan, Myanmar and Thailand to build the Dawei Special Economic Zone.

Bumrungrad Hospital recently received a business permit from the Myanmar Investment Commission to operate a private clinic and diagnostic services there.

George McLeod, a manager at PricewaterhouseCoopers, said Thailand has been very successful in Myanmar and better at mitigating political risks than the West.

“There is a general trend of outbound investment in Thailand, changing from becoming an investment destination to a foreign investor in its own right,” he said.

“That trend is going to continue regardless of the result of the election.”

“The new government is likely to further amend the regulations to promote foreign investment, such as laws to liberalise the financial sector to enable the easier transfer of currency,” Mr Thanit said.

The USDP's push for a federal system and peace with all ethnic groups is crucial to investor confidence. “When we do business in the country, we have to get the buy-in not only from the government but also representatives from different ethnic groups such as the Karen,” Mr Thanit said.

Thai ambassador to Myanmar Pisanu Suvanajata said during a recent seminar that true democracy would not be possible unless longstanding problems relating to ethnic minorities are resolved peacefully.

The next government has to work with the rebel groups which have not yet signed an agreement as a way forward to democracy, according to Mr Pisanu.

“It is welcoming that Myanmar unity is one of the themes that we have heard during the campaign,” Mr Thanit said.

Foreign ministry spokesman Sek Wannamethee said longstanding ties between Thailand and Myanmar would not be changed by the election result.

Mr Wirat said although the election has been billed as free and fair, he does not expect to see drastic change.

“I doubt whether the political structure will change under a 'controlled democracy' as the constitution reserves a quarter of the parliamentary seats for the military,” he said.

“The junta is likely to continue to influence the government anyway.”

Incumbent Thein Sein is the frontrunner for the position of president should the USDP win.

Prajak Kongkirati, chair of Thammasat University’s Centre for Southeast Asian Studies, said if there is a free and fair election, pressure will increase on Thailand to return to democracy. If the NLD wins, Thailand will be the only country in Southeast Asia under military rule.

“No one has ever really thought that Thailand would go backwards and be in the same position that Myanmar was in the past,” Mr Prajak said. 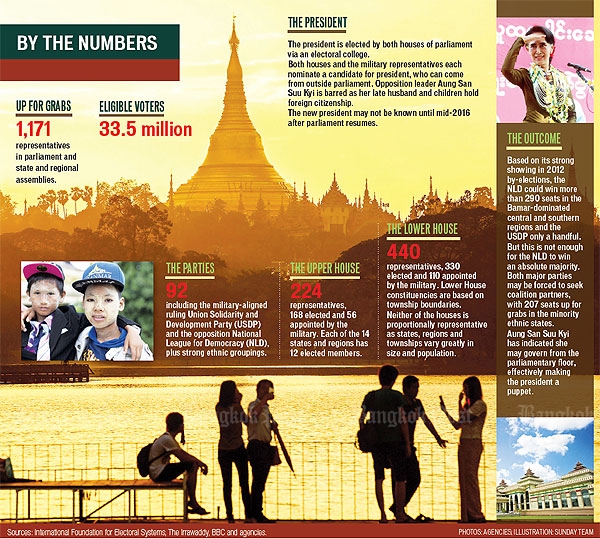