The National Council for Peace and Order will file charges against former national police chief Sereepisuth Temeeyaves for acts intended to create public disorder and operating broadcasting services without permission.

Pol Gen Sereepisuth is one of the seven people to face charges after soldiers led by Col Burin Thongprapai, a Judge Advocate General's Department officer, searched Fahai TV radio and television station on Tiwanon Road in Nonthaburi’s Pak Pak district on Wednesday evening. The raid came after the officers alleged content in a TV talk show programme could pose a threat to national security and public order and that the station operated without licence. 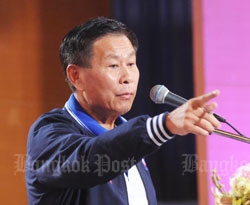 The soldiers were acting under NCPO order no.3/2558 dealing with peacekeeping and national security under Section 44.

The team arrested five people including the station's owner, staff and hosts and seized 44 items of broadcasting equipment along with footage of the programme in question after the station’s owner failed to show a licence.

Charges were also brought against Fakhum Co, the operator of Fahai TV and two other hosts, Pol Gen Sereepisuth and Pannathorn Ratphuridej, who were not present at the time of the raid.

Col Burin reportedly asked CSD investigators to summon Pol Gen Sereepisuth and Mr Pannathorn for questioning as he plans to lodge charges against them on Friday.

Pol Gen Sereepisuth faces charges of hosting a TV programme called "Siang Seree" (Seree’s voice) in which he criticised the NCPO, according to Ms Porntipa.

The 67-year-old former crime buster gained a reputation for honesty and a straightforward approach during his career. He arrested many politicians and influential people including Somchai Khunpluem, better known as Kamnan Poh and the "God Father of Chon Buri".

Pol Gen Sereepisuth earlier said the military needed to reform itself before trying to reform the police force, and alleged there was widespread corruption in the armed forces, including in the Rajabhakti Park project in Hua Hin.