Prime Minister Prayut Chan-o-cha wais President Xi Jinping on Nov 9, 2014, at the start of a bilateral Thailand-China meeting at the Great Hall of the People on the sidelines of last year's Apec summit. (AFP photo)

China has thrown the military government of Prime Minister Prayut Chan-o-cha a curve ball with its tough negotiating stance for the high-speed railway deal. This comes after the government appeared to cleave to Beijing's interests in a series of foreign affairs decisions which critics said showed Bangkok was drawing too close to the superpower.

China's tough stance in the railways talks, ironically, gives the government a chance to assert its self-interest as other negotiating partners in the region have done, observers say.

Greater pursuit of self-interest would correct a recent skewing of the relationship in China's favour on the foreign affairs front.

Beijing emphasised the closeness of its ties to Thailand in the aftermath of the 2014 coup, in contrast to the United States and its Western allies, which urged a return to democracy.

The government appears to have warmed to the idea, eagerly courting China's investment in its megaprojects and stepping up defence drills.

More recently, it has also met China's request for the deportation of Uighur refugees who sought asylum in Thailand, and even deported two refugees who were registered with the United Nations.

Those foreign policy decisions earned criticism from human rights groups which complain the Prayut regime is drawing too close to the superpower, and risks upsetting its other allies. 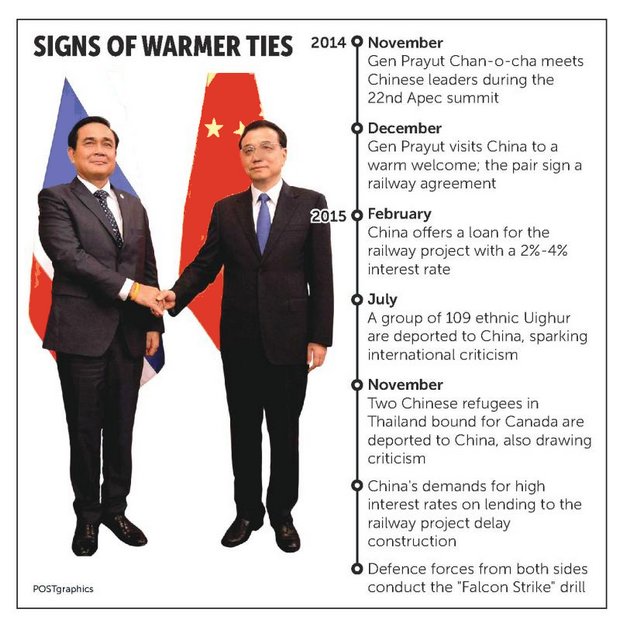 China's tough stance on the high-speed railway talks appears to have taken the government by surprise, given the work it has done on other fronts to court the superpower.

Prime Minister Prayut last week ordered key ministers to go to China for negotiations on the delayed Thai­-China railway project after China set a high interest rate on loans to finance it.

Deputy Transport Minister Ormsin Chivapruck said the prime minister's order came after Chinese authorities quoted the interest rate on its loan to finance the railway project at 2.5%, which is higher than the 2% which Thailand was expecting.

China has also made a new estimate for the project cost, at 500 billion baht -- 100 billion baht higher than the original anticipated cost for the 867km project.

China's actions have caused delays to the project while negotiations have taken place eight times since January but failed to reach a conclusion.

Sompop Manarungsan, president of the Panyapiwat Institute of Management and an expert in Thai-Chinese affairs, said the interest rate tussle could affect the China's bid for increased influence in the region.

Increasing its investment footprint through projects, such as the high-speed railway in Thailand, is key to its geopolitical goals.

"China might be wrong if they think we depend on them for infrastructure projects, because Japan is ready to challenge them and counter their offers. Japan is an old friend in Asean and Thailand in terms of investment,'' he said.

Mr Sompop said China has its eye on increasing investment in Cambodia, Laos, Myanmar, Vietnam and Thailand, but bargaining power lies with those Mekong countries as the intended investment destinations.

"It seems only Cambodia is still being a close friend to China in terms of economic cooperation as other countries are starting to consider other choices to maximise their own benefits,'' he said.

"The Thai government should aim to stay independent, as it has no need to run after any particular country. We can stand on our own feet, in spite of international pressure,'' Mr Sompop noted.

Critics of the government's foreign affairs stance towards China might welcome the hiccup over the railway deal, if it encourages the government to pursue greater self-interest.

Lately, they say its foreign affairs stance has been too skewed towards China.

The military was forced to defend its deportation of two Chinese refugees to Beijing last week after activists said the refugees were bound to be persecuted on their return.

The refugees were deported after they were arrested for illegal entry into Thailand, National Security Council secretary­-general Thawip Netniyom said.

Gen Thawip said that apart from the illegal entry charge, the Thai government was informed by China that the men -- Dong Guangping and Jiang Yefei -- were anti­-Chinese government activists and were involved in human trafficking in their home country.

"The United Nations High Commissioner for Refugees only has information that they are activists. It does not know if they have committed human trafficking crimes,'' he said.

Earlier, the government came under attack for deporting 109 members of the Uighur ethnic minority group to China, and another batch to Turkey.

Some observers including the then police chief linked the episode to the bomb blasts at the Erawan shrine and Sathon pier in August, noting some of the suspects have Turkish roots and may have plotted the attacks in protest.

Chulalongkorn University's professor of political science Surachart Bumrungsuk said the government's decision to deport the two refugees last week showed it had not learned its lesson from the Uighur saga.

The government's decision to deport the Uighurs to China and Turkey had prompted protests at the Thai honorary consulate in Istanbul, Turkey, later the same month.

"This time it's even more sensitive as the two are recognised by the UN, but we don't seem interested.

The world is denouncing Thailand for its flip-flop, for not respecting the human rights principles that we preach," Mr Surachart said.

The repatriations confirmed Thailand's lean towards China in foreign affairs, Mr Surachart added, noting the lopsided pro-China policy was a shift from the balanced foreign policies which Thailand observes towards the US.

Thammasat University professor of international relations, Chulacheeb Chinwanno, said Thailand has sought a strategic partnership approach with all the major powers, weighing the benefit of long-term interests on the political, economic, socio-cultural and security fronts.

"But in the past year we appear to have drawn closer with China as we show our keen interest in buying Chinese weapons including submarines and wrangling over the railway deal with China," Mr Chulacheeb said.

He said the Foreign Ministry has to convince the major powers that Thailand is engaging with all countries evenly, rather than favouring any country in particular.

Meanwhile, members of the Thai and Chinese air forces met last week for a joint exercise drill, the first of its kind in Southeast Asia, which shows how close ties have become on the defence front.

After the 23-day Falcon Strike exercise ended last Friday, Deputy Prime Minister Prawit Wongsuwon said the days when Thailand and China might hold a joint exercise for all three armed forces, in the same manner as the grand Thai-US military drill, Cobra Gold, are still some way off, despite the step forward.

"We have not reached a stage where three defence forces participate in the same drill," said Gen Prawit, who is also defence minister.

"But we will focus more on joint research on weapons and national defence-related industry," he said.

As minister, Gen Prawit has led military leaders to visit China four times to strengthen ties between the countries.

He is aware of criticism that the government has been cosying up to China in defence and foreign affairs, but denies the claim.

"We stay neutral and make friends with all countries," he said.

"Don't say we have tried harder with China because the two countries have always had a good relationship."