Prime Minister Prayut Chan-o-cha told reporters after the cabinet meeting at Government House on Tuesday that the GMO bill was dead. (Photo by Chanat Katanyu)

The legislation was initiated long ago and its consideration should stop as there was no pressing need for it, the prime minister said after the cabinet's meeting on Tuesday.

Gen Prayut said that other countries planned to use genetically modified (GM) plants during times of war or widespread disease that affected crop cultivation because they could be engineered to endure pandemics, produce high yields and consume less water.

Government spokesman Sansern Kaewkamnerd said the matter was shelved because Thailand had yet to reform its agricultural sector. The cabinet returned the bill to the Ministry of Natural Resources and Environment, he said.

He denied that the government dropped the GMO bill because of strong opposition, Maj Gen Sansern said. 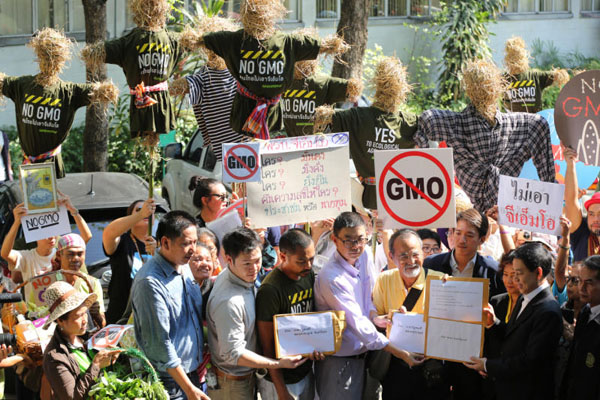 Opposition to the GMO bill rally near Government House on Dec 9. (Photo by Seksan Rojjanametakun)

Drafting of the legislation began in 2004 and the bill was revised in 2008 before reaching the cabinet this year. As it has taken this long to come to fruition, the bill's passage should not be rushed, he said.