Over 30 labour abuse probes under way

The government has dismissed a recent report by the Associated Press that Thai authorities turned a blind eye to slave-like labour conditions in the shrimp industry.

During a press briefing at Government House yesterday, a team of government spokesmen and anti-illegal fishing and human trafficking specialists disputed the report, insisting serious efforts have been under way to end labour abuses and requested that the media write fair reports.

Government spokesman Sansern Kaewkamnerd denied the AP report on Dec 13, which alleged that authorities ignored forced labour at shrimp-peeling sheds in Samut Sakhon and that Thailand had become one of the world's leading shrimp-exporters because of low costs resulting from labour abuse. 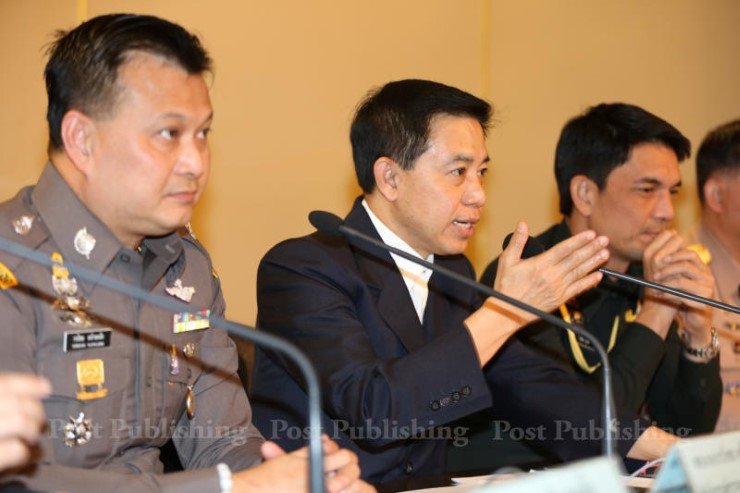 "The report was wrong and had a widespread impact," said Maj Gen Sansern.

(The full AP report with photos and dozens of public comments, can be read here on the Bangkok Post website.)

It highlighted the plight of a Myanmar couple who attempted to escape from the factory.

Responding to media claims that those behind human trafficking rings remain at large, Maj Gen Sansern said that since the National Council for Peace and Order took over national administration, those involved in human trafficking -- including government officials, local officials, soldiers and police -- were being punished. They face both disciplinary and criminal action, he said.

Thailand is one of the leading shrimp exporters not only because of low production costs, but also because of the quality and freshness of the shrimps, he said.

The experiences of the Myanmar couple cited by the AP report are not representative of the conditions for all workers, he said, citing the 3 million foreign workers in Thailand who are well protected by labour laws.

Vice Adm Jumpol Lumikanont, deputy secretary-general of the navy, said the situation described in the AP report happened on Nov 9 at a time when authorities were working to tackle labour abuse in Samut Sakhon.

But the AP report inaccurately claimed officials overlooked the slave-like conditions and the illegal detention of workers.

By using a picture of workers in a cell, the report communicated the idea workers were detained, but what was actually happening in the photo is officials were in the process of sorting out which workers were illegal and which had papers.

An operation to combat labour abuse started on Nov 9, and 101 of 125 targeted factories were inspected, and the number of factories with labour abuse was reduced, Vice Adm Jumpol said at Government House.

The move came after the European Union gave Thailand a yellow card in April for failing to solve its illegal, unreported and unregulated (IUU) fishing problems.

An inspection by the EU in October still found labour abuse in the industry and the government was asked to curb the abuse of fishermen, Vice Adm Jumpol said.

In light of this, the government set Nov 9 as the D-Day to start the operation, with 25 teams of inspectors deployed to 22 coastal provinces, he said.

The Samut Sakhon investigation was spurred on after a Myanmar worker who escaped a shrimp-peeling shed in Samut Sakhon's Muang district alerted the Department of Special Investigation to terrible working conditions.

Vice Adm Jumpol said authorities are still investigating 14 cases involving the abuse of workers under the age of 14, three human trafficking cases and 16 cases in which state officials are suspected of being involved in human trafficking and labour abuse.

Ending labour abuse and human trafficking is the government's national priority and serious efforts are being made to tackle the problems, he said.

Currently, eight police officers in Chumphon, who were implicated in alleged wrongdoings, have also been transferred out of the province, Vice Adm Jumpol said.

"I ask for fair treatment for officials, who are working both on land and at sea. Our work is integrated ... Please do not exaggerate part of a report or photographs in the wrong way," he said. 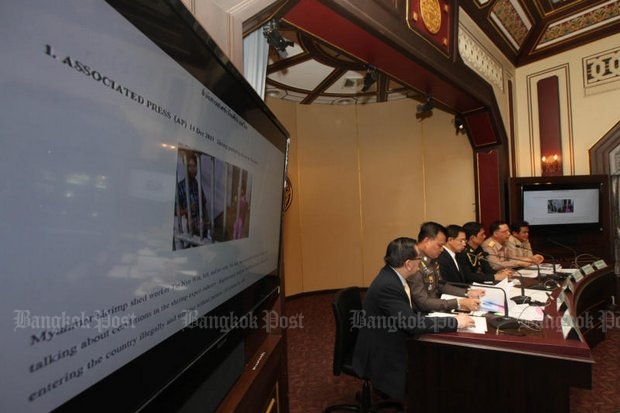 Pol Maj Gen Kornchai Khlaikhlueng added that many victims were rescued in the operation on Nov 9. Authorities discovered that nineteen of the workers had no proper entry documents, and 10 were below the age of 18.

They are now being taken care of, in line with international human rights standards, said Pol Maj Gen Kornchai.

Thirapol Khunmuang, a spokesman for the Labour Ministry, said the ministry has focused on improving the status of illegal migrant workers so they can work legally.

Meanwhile, the AP has stood by its report, which is part of a series of investigations this year into slavery in the fishing industry in the region.

"We stand firmly behind our reporters' coverage, which has been scrupulous, thorough and fair'," said Paul Colford, a vice-president of AP and director of media relations.