The government claimed Tuesday that 99.3% of people in a poll were satisfied with its performance.

The announcement came the day before the government is scheduled to present its one-year performance report Wednesday.

However, government critics were doubtful, saying the poll conducted by the National Statistical Office could only be meant to test the waters and gauge the public's reactions to its performance over the past year.

Speaking after Tuesday's cabinet meeting, government spokesman Sansern Kaewkamnerd said the National Statistical Office (NSO) briefed the cabinet on the results of its survey in which respondents were questioned about the government's performance.

The survey questioned 2,700 people nationwide between Nov 27 and Dec 4. 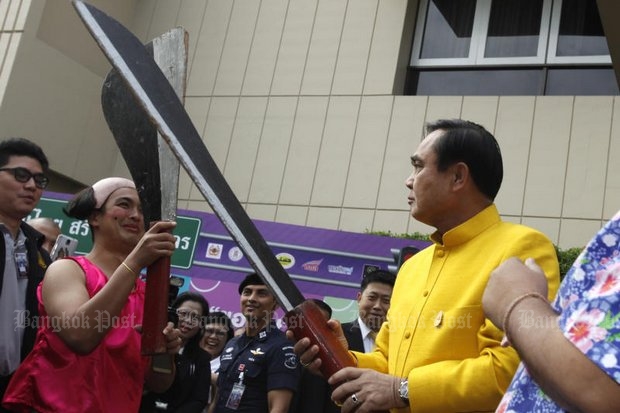 When asked to specify which projects they were most satisfied with, 99.9% gave a thumbs up to the government's efforts to control lottery ticket prices at 80 baht, while 99.5% said they were happy with the government's drug suppression operations.

However, 53.2% of the respondents wanted the government to curb the rising prices of consumer products, whereas 35.7% wanted it to solve the falling prices of farm produce.

According to the survey, most respondents, or 85.2%, follow the government's work via the prime minister's weekly televised address on Fridays, followed by mass media such as television, radio and online media at 84.8%.

Gen Prayut will lead the presentation to tell the public what the government has achieved during its one year in office. The presentation is expected to take an hour and will be followed by a 20-minute presentation from each of his six deputies supervising different ministries.

Under the original plan, the presentation was to be held from Wednesday until Friday at Government House with ministers from all the ministries giving presentations.

However, Maj Gen Sansern said ministers will instead appear in the National Council for Peace and Order's daily television programme every day until Jan 13, except on Fridays, to discuss their work.

The first programme scheduled for Wednesday will feature Gen Prawit and the final broadcast will be made by Industry Minister Atchaka Sibunruang, he said.

Gen Prayut talked Tuesday about the poll's results, saying the government's performance looked good, though the economy was still in bad shape as the public wanted the government to boost efforts to improve the economy.

"If you ask me whether I am satisfied with the government's performance ... as long as we are not done with the job, we cannot be satisified," the prime minister said.

Gen Prayut said he has attached a great deal of importance to the presentation of the government's one-year performance review and that he wanted to build a proper understanding of what happened before the coup in May last year and what followed afterwards.

He admitted that the government has not been able to achieve all of its projects due to legal hurdles, public hearings and resistance from human rights and non-government activists.

The 20-year strategy, based on the government's reform policies and reform proposals from the National Council for Peace and Order (NCPO) and the now-defunct National Reform Council (NRC), will cover security, the economy, social issues and legal and foreign affairs.

The government hopes the plan will help keep the changes pushed by the NRC alive even during the tenure of future governments.

However, in a statement released Tuesday, the Pheu Thai Party highlighted what it perceived as the military government's most notable failures in national administration during its one year in office.

Regarding the government's anti-corruption campaign, the party said the government unfairly singled out politicians for blame as the source of corruption.

On the economic front, the government has failed to understand economic problems and does not have the ability to address them. Foreign investment has shrunk, consumer spending is low and the economy is in distress.

The party also said in the statement that foreign countries' confidence has declined as they wait for a return of democracy in Thailand, while the government's reform plan has failed to make any significant progress.

Former Pheu Thai MP Cherchai Tantisirin Tuesday disputed the NSO poll findings, saying the poll results suggesting that up to 99% of respondents were satisfied with the government's work were not credible. He also noted the military government may want to gauge its popularity and has a plan to set up a political party to stay on in power.

LONDONซ Manchester United crashed out of the League Cup as West Ham avenged their painful loss to Ole Gunnar Solskjaer's side with a 1-0 win at Old Trafford, while Chelsea and Tottenham survived penalty shoot-outs to reach the fourth round on Wednesday.