Despite a numerical decline, there has been a surge in 'extra-judicial' aspects of cases through the use of military courts

Some of the major lese majeste cases of 2015 - and a street protest in favour. (Bangkok Post photos)

Despite an annual decline in lawsuits over the past couple of years, the lese majeste law has been toughened under the junta, in which a military court has replaced a civilian one in ruling on criminal charges that carry a maximum jail term of 15 years for each count, lawyers and critics say.

Like civilian politicians who, in the past decade, resorted to the law to eliminate their political enemies, critics say the ruling generals have been using the Penal Code's Section 112 to silence their political opponents, an allegation the government and the National Council for Peace and Order (NCPO) deny.

"It is the duty of the police to act [against those violators], not the NCPO because the law has been in place for such a long time," NCPO spokesman Colonel Winthai Suvaree said.

David Streckfuss, an independent scholar in Thailand, said the number of lese majeste lawsuits surged after the 2006 coup that toppled the government of prime minister Thaksin Shinawatra.

The number of cases accepted by the lower court rose nearly four-fold to 126 in 2007 from a mere 33 cases accepted in 2005, according to Mr Streckfuss.

In comparison, the number of lawsuits accepted dropped to 61 from May 22, 2014, when Gen Prayut Chan-o-cha overthrew the Yingluck Shinawatra government, to Dec 10 this year, according to rights advocacy group, iLAW (Internet Law Reform Dialogue).

Despite the numerical decline, Mr Streckfuss said there was a surge in "extra-judicial" aspects of lese majeste cases, namely the use of military courts and military court proceedings, after the NCPO ordered that lese majeste crimes be tried by military judges.

"The fact that the opaque court proceedings -- in certain cases were not open to the public, the inability to appeal, the difficulty in getting bail, have intensified the scariness and ugliness in the eyes of the human rights caucus," said the American scholar.

According to iLAW, 37 people have been arrested and indicted in at least 17 lese majeste cases at all court levels this year. Trials were swift as most defendants confessed and did not appeal.

Sentences given by the military court this year have also varied from prison terms of two and a half years to 30 years.

In a way, lese majeste convicts have a better chance of being released from prison more quickly by receiving a royal pardon, compared with those in the last several years who have fought court cases and been stuck in prison while being denied bail.

Anon Nampa, a lawyer who has represented several lese-majeste defendants, said that in the past year, he has seen an increase in the number of government critics slapped with criminal charges on public disorder and/or instigation offences and later charged with lese majeste to prevent them from being freed on bail.

"Terrorism charges used to be a powerful tool to scare opponents of the government, but now the use of Section 112 has become a scarier political weapon against the junta's critics ... They just abuse the law to maintain their political position," said the human rights lawyer.

The office of the UN High Commissioner for Human Rights has said it is appalled at the long prison sentences given to people convicted in Thailand for insulting the monarchy, and is calling for the immediate release of all people jailed for exercising freedom of expression.

The statement, released in Geneva in August, came just four days after Thai military courts, in separate cases, gave prison sentences of 30 and 28 years, respectively, to a man and a woman for posting messages on Facebook found to have violated the lese majeste law.

Spokeswoman Ravina Shamdasani, said the UN agency is urging the Thai government to amend the law to meet international human rights standards, declaring that it should not be used to smother public debate.

Section 112 is one of several issues the Geneva-based diplomats have raised at the annual Universal Periodical Review discussions but the Thai government has not responded to the recommendations.

The NCPO's Col Winthai declined to respond to any of the accusations or demands.

"There have been attempts to instigate such a debate, but the media should be aware of those opponents and critics of Section 112. You know what kind of people they are," he said. 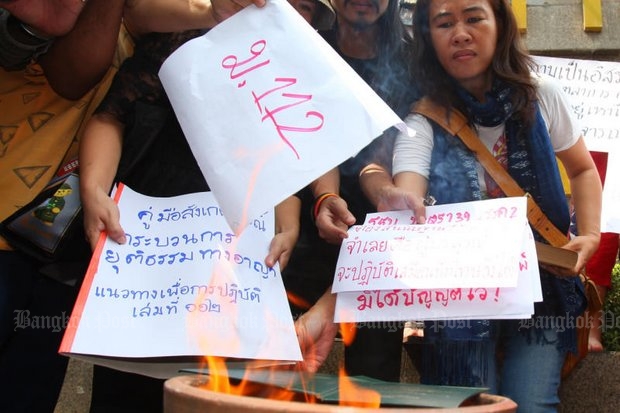 Political activists burn law books as a symbolic gesture to express their disagreement with the government’s tougher measures on the lese majeste law. (Photo by Pattarapong Chatpattarasill)