The Council of State's (CoS) interpretation of the National Health Security (NHS) law could devastate the Universal Coverage Healthcare (UC) scheme, a health group says.

According to the legal interpretation, the UC budget should be spent on "healthcare services", meaning compensation for healthcare staff. Hospitals' electricity and water bills are not covered, said Yupadee Sirisinsuk from Chulalongkorn University's Faculty of Pharmaceutical Sciences, who is associated with the drafting process for the law.

She was speaking at a seminar on the NHS law, organised by the Civil Independent Organisation for Consumer Protection's subcommittee for healthcare services, in Bangkok Thursday.

The UC budget can't be spent on skill development or monitoring systems for local healthcare personnel, nor on activities or campaigns for public health, she said, citing the latest interpretation.

The UC budget is distributed to state-run hospitals nationwide based on a capitation system -- 3,028 baht per head in the 2016 fiscal year. The budget is divided into categories of spending to support healthcare services. However, each operator has the flexibility to manage the budget according to their needs.

The CoS's interpretation follows the Monitoring and Auditing Committee on Fiscal Expenditure's  (MACFE) launch of an investigation into spending at the National Health Security Office (NHSO), the operator of the UC scheme.

The investigation found the NHSO used its budget improperly, a claim the NHSO denies. NHSO executives later asked the Council of State to interpret the NHSO Act to better understand the investigation results.

"The CoS interpretation [of the law] is too narrow," said Ms Yupadee. "But the interpretation misses the original intention of the National Health Security law which is to allow everyone access to healthcare services."

She said UC spending on healthcare personnel, hospital utilities and health promotion programmes was part of healthcare services, meaning it should be covered by the UC budget, she said. MACFE did not understand healthcare management, she added.

Civic groups were most concerned about the interpretation preventing the NHSO from spending the UC budget on drugs.

They told the seminar that this would force each state hospital to procure drugs itself which would result in weaker power to negotiate for lower drug prices. 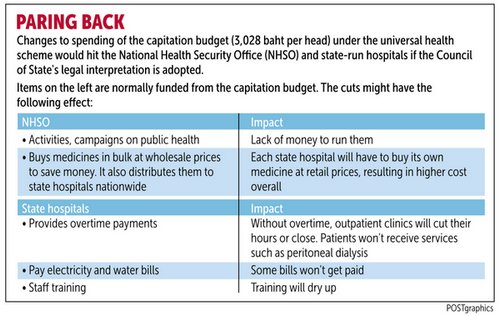 Nimit Tian-udom, Aid Access Foundation director, said the NHSO has mechanisms to procure drugs in bulk and then distribute them to state hospitals nationwide. This made drugs more affordable while reducing corruption risks, he said.

The NHSO, in collaboration with the Government Pharmaceutical Organisation, has a system to guarantee availability of the drugs, he added.

Before the launch of the NHSO, state hospital operators purchased drugs alone.

There were problems in drug management such as drug shortages as it took a long time to get approval for funding.

"The interpretation is like turning the healthcare system backwards," said Mr Nimit.

Supat Hasuwannakit, a director of Chana Hospital in Songkhla, said the CoS failed to understand the context of community hospitals. His hospital, located near the three southernmost provinces, is likely to be affected.

For security measures, hospital operators have to ensure proper illumination, hire security guards, pay overtime and be ready for emergencies. The CoS interpretation hinders all these processes.

"This will have impacts on patients. It's like killing the UC," said Dr Supat, raising suspicion the move is intended to make life difficult for the NHSO. "We've managed the budget for efficiency so we can offer healthcare rights to everyone equally," he said.