Draft sparks fear election will be delayed until 2018
Thailand
Politics

Draft sparks fear election will be delayed until 2018

Fresh elections could be delayed until early 2018 or even further if the 10 organic laws in the charter cannot be finalised by the deadline. 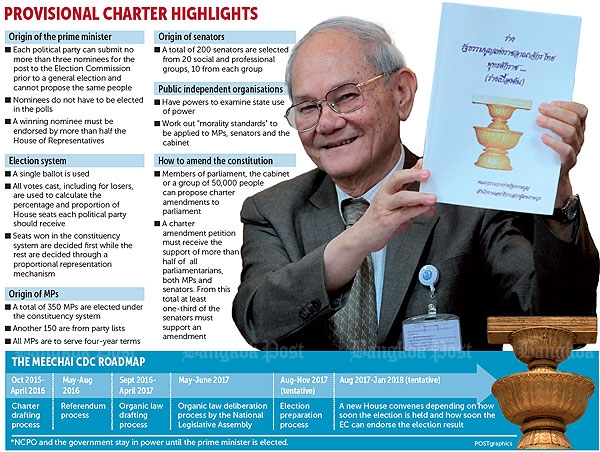 The revised first draft of the new charter was unveiled by the Constitution Drafting Committee (CDC) headed by Meechai Ruchupan yesterday. Sections 259 and 260, out of a total of 270, have triggered cause for concern.

The two sections, which have drawn wide interest, deal with the process and the drafting of 10 accompanying laws necessary for holding elections.

The sections say elections of MPs and senators will be held within 150 days, or five months, after the enforcement of the 10 organic laws. The drafting of these organic laws will take eight months and deliberation by the National Legislative Assembly (NLA) will take another two months.

As a result, the election process can start from May or June 2017 and the election could be held in October or November 2017, about three to six months later than the time fixed in the National Council for Peace and Order's (NCPO) road map.

However, the sections also stipulate that if the CDC fails to complete the 10 organic laws in eight months, the CDC will be dissolved and the NCPO will set up a new CDC to continue drafting the 10 organic laws until they are complete. The sections do not determine the time frame under which the new CDC would work.

The clauses have sparked concern among political observers that a new election could be delayed until 2018.

However, Mr Meechai denied any alleged hidden agenda to delay the election.

"The clauses were written to force the CDC to complete the drafting of the 10 organic laws in eight months as otherwise they would be punished," he said.

And if a new CDC is set up, the time frame would have to be reset, he said.

Mr Meechai said it is necessary to impose the deadline in order to "put pressure" on the CDC to complete its job or be dismissed.

He said he could not say how long a new panel would take to draft the organic laws.

"What if we can't finish the organic law package? But I'm confident we can, just like we finished the draft charter in six months. Anyway, we will need to have it covered if we miss the deadline."

"If it causes such concern ... we will hear feedback and after that we can deal with it," Mr Meechai said.

Section 259 of the new draft also authorises the NCPO chief to appoint more charter drafters to help draft the organic law package. But the number must not exceed 30. Currently, there are 21 of them.

The CDC chairman also said the extra members are expected to help the CDC complete drafting the organic laws within the deadline.

Asked if it is possible to speed up election-related laws and proceed with elections first, Mr Meechai said the CDC may consider that.

"The political roadmap is what the government plans to do. But if we don't have organic laws, we can't have elections either. And it is possible e may not have to wait for all 10 to be completed. If four or five election-related laws are completed and enforced, we can proceed with elections," he said.

At the launch of the draft charter on Friday, Mr Meechai said the draft is focused on preventing and combatting corruption to ensure financial discipline in state spending and mechanisms to scrutinise use of state power.

He said these mechanisms and measures are incorporated in the draft, which has prompted criticism by politicians.

He insisted that these measures are "obligatory" because it is in line with the interim charter's framework and the people's input.

"So this charter is focused on suppressing and preventing corruption so that bad deeds cannot be whitewashed.

"No matter how many drafts are produced, as long as the interim charter is in place, these elements will be there," Mr Meechai said.

The CDC head also said public independent agencies are not given more power than they have now, but the draft spells out what is considered to be corruption and ethical offenses.

He insisted people seeking to serve on these bodies will be strictly screened and they will also be subject to scrutiny to prevent abuse of power.

"To set the record straight, this draft isn't complete. It needs suggestions from all sectors. We're open to suggestions, but we need something more than 'it is not democratic' to make it better.

"The charter is for everyone and the country. So any recommendations should be in the public interest," he said.

Reacting to Mr Meechai's remarks, Pheu Thai's Worachai Hema said it is clear the draft is designed to be shot down at the referendum so that the military junta can hold on to power.

He suspected that after the draft was rejected, the NCPO chief would use his power under Section 44 of the interim charter to call elections and a new government would come under its control.