A soldier steps in to try to control the large crowd of monks, many of them angry over delays in the appointment of their preferred supreme patriarch. (Photo by Taweechai Tawatpakorn)

Tempers flared over the appointment of the 20th supreme patriarch after a network of monks and devotees stepped up calls for the immediate appointment of Somdet Phra Mahamangalacharn to the top post.

The network calling itself the "Sangha and Buddhists Alliance of Thailand" (SBAT), comprising roughly 1,200 monks and supporters, gathered Monday at Phutthamonthon Buddhist park in Nakhon Pathom to attend a seminar titled "Block the plot to overthrow the Sangha's administration".

They were led by Phra Methee Dhammacharn, secretary-general of the Buddhism Protection Centre of Thailand, who is also assistant abbot of Wat Maha That in Bangkok.

The group issued a statement calling on the prime minister to present the nomination of Somdet Phra Maha Ratchamangalacharn, or Somdet Chuang, the 90-year-old abbot of Wat Paknam Phasi Charoen, to His Majesty the King for royal endorsement as the new supreme patriarch.

Somdet Chuang is acting Supreme Patriarch and chairman of the Sangha Supreme Council (SSC). The SSC unanimously nominated him to the top post at a meeting on Jan 5.

"Many malicious groups have tried to attack the Thai monastic community with false accusations. They tried to interfere with the appointment of the Supreme Patriarch, by claiming the SSC's nomination for supreme patriarch was malpractice," the statement said.

"The nomination process was in fact conducted carefully and transparently. All of these actions show these groups are trying to prevent the SSC's unanimous decision to nominate the new supreme patriarch," according to the group's statement.

In its statement, the Buddhist network also demanded that Buddhism be declared the official state religion in the new constitution. 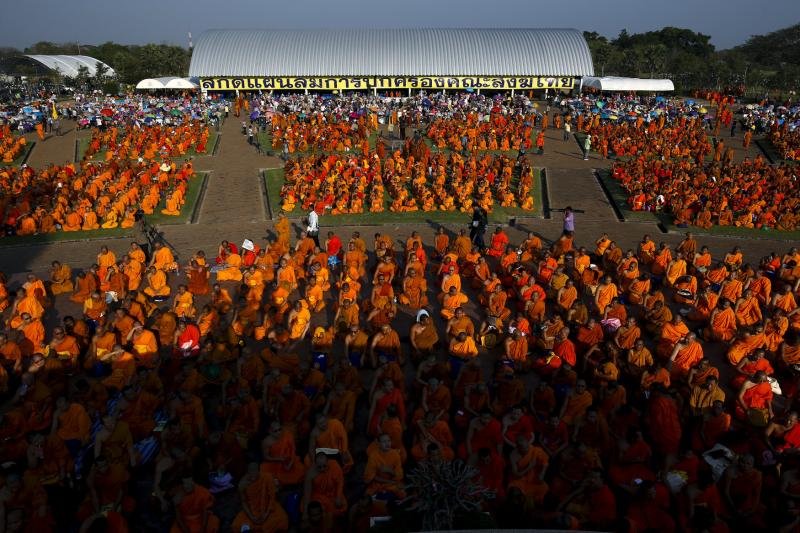 Monks formed up at Phutthamonthon Buddhist park and heard speakers against state interference in religious affairs, while demanding Buddhism be installed as the state religion. (Reuters photo)

The group also wanted the prime minister to stop government agencies from interfering in matters related to the monastic community.

The group wanted the government to consult the SSC and obtain its approval before taking any action related to the monastic community. All agencies must treat the Sangha with respect. They must not use threats or tactics which may frighten the monks, the group demanded.

About 150 soldiers barricaded the entrance to prevent any vehicles from entering the Buddhist park. Scuffles broke out at 1.30pm, when the monks tried to push soldiers' trucks from the area.

Two hours later, soldiers blocked another entrance with trucks. Monks told the soldiers to clear the way or they would do so themselves. Some monks tried to move the soldiers' vehicles. Scuffles broke out again when a monk put a soldier in a headlock. No one was injured.

According to Thammasala police station, about 950 monks and about 200 supporters both from Bangkok and the provinces attended the gathering.

It was reported that Phra Buddha Isara, a vocal critic of the nomination of Somdet Chuang, planned to attend the seminar, although he was stopped by soldiers to prevent any confrontation.

The monk said the Buddhist network would return if their demands were not met. 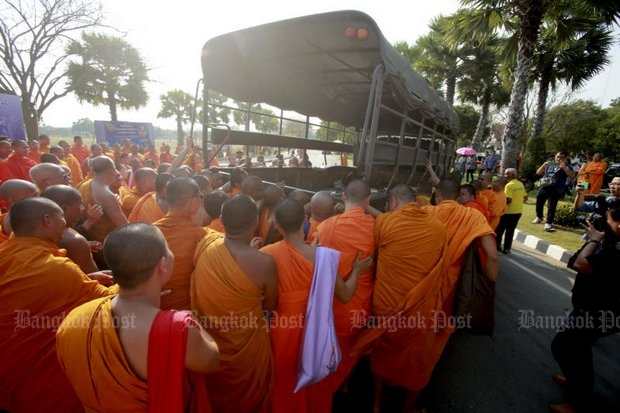 Monks try to push away a military truck blocking an entrance to Phutthamonthon Buddhist park where the so-called "Sangha and Buddhists Alliance of Thailand (SBAT)" gathered Monday. (Photo by Taweechai Tawatpakorn)