Ousted prime minister Thaksin Shinawatra, along with his sister Yingluck Shinawatra, also an ex-premier, are exploiting the foreign media to ratchet up global pressure on the military government, a Pheu Thai source says.

It was her first press conference for foreign journalists since the coup. Ms Yingluck was quoted as saying the invitation was a simple get-together with no agenda. 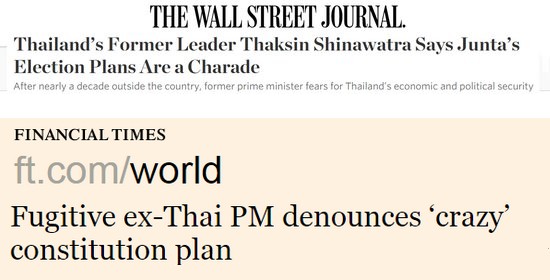 She told the journalists she was spending her days tending to her vegetables, visiting temples and meeting friends. Ms Yingluck was pictured picking lettuce as she showed off her organic vegetable garden to her guests.

But political analysts see it as a move to cash in on publicity as she is struggling with a court case over her government's controversial rice-pledging scheme, which has landed her in the Supreme Court for alleged dereliction of duty, when she was prime minister. 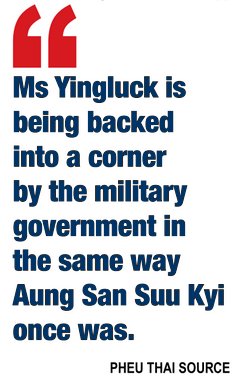 Observers noted that the garden party was quite a success as she managed to grab a great deal of attention from foreign media outlets.

She took advantage of the occasion to tell the media about her preparations to fight the rice-pledging case and also bemoaned the fact that she would not be eligible to contest a general election under the new charter due to her impeachment by the National Legislative Assembly (NLA).

The impeachment resulted in a five-year political ban.

The impeachment vote was cast in January last year after the National Anti-Corruption Commission petitioned the NLA to impeach Ms Yingluck, accusing her of dereliction of duty for failing to stop the corruption and losses that beset the rice-pledging scheme.

However, in his weekly address to the nation in the evening that day, Prime Minister Prayut Chan-o-cha warned against any attempts to spread distorted information and exploit the foreign media to cause misunderstandings.

Political observers saw his remarks as being directed at Ms Yingluck following her garden party earlier in the day.

The source said even though she may be having a hard time fighting the rice case in  court, Ms Yingluck still has the upper hand over the military government on the political front.

Pheu Thai is now manoeuvring outside the courtroom and in the international community to win the political war by appealing for world sympathy, the source said.

"We will drive home the message that the military junta is undemocratic. The international community will agree that Ms Yingluck is being backed into a corner by the military government in the same way Aung San Suu Kyi once was," the source said. 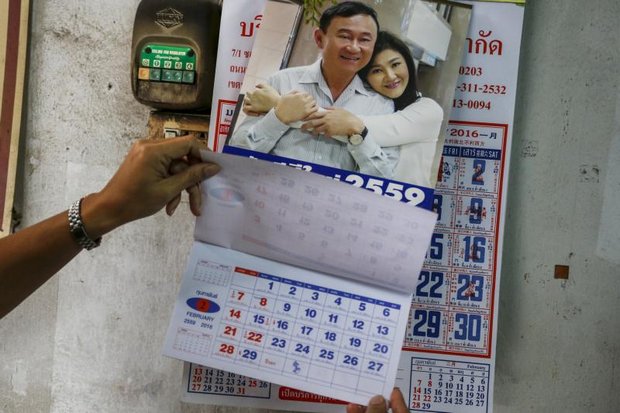 Ex-premiers Thaksin and little sister Yingluck Shinawatra appear on a calendar which has been effectively banned. (Reuters photo)

The source said several past governments were also plagued with corruption, but Pheu Thai has been singled out for persecution.

"Even some soldiers are also [allegedly] involved in corruption, but no action has been taken against them," the source added.

The source also said several Pheu Thai key figures did not think the military regime would accept an offer for talks made by Thaksin.

During an interview with the Financial Times published online on Sunday, Thaksin called for talks with the military regime, adding there were no conditions set for the proposed dialogue.

In the interview, Thaksin also denied rumours he was in any direct or indirect talks with the military government to strike a bargain to end the prosecution of himself and his family.