The government has shut the door on Thaksin Shinawatra's offer to engage in dialogue after his statements casting doubt over the government's attempts to return Thailand to civilian rule.

Senior officials said the main reason they declined the meeting is that the former prime minister, who escaped a 2008 court ruling over abuse of power while serving as premier, is a convict, and as a result is in no position to initiate negotiations with lawmakers.

While Thaksin told foreign newspapers he was not setting any conditions for the talks, the government feels uneasy and is unwilling to participate, Deputy Prime Minister Tanasak Patimapragorn said Monday. 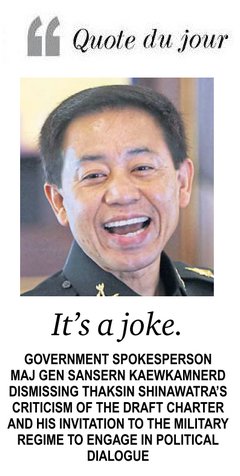 Thaksin probably has a set of proposals, especially considering that the draft charter is causing controversy in Thai society, but "it's difficult for police to talk with a person wanted in criminal cases", he said.

In 2008, the Supreme Court's Criminal Division for Political Office-Holders sentenced Thaksin to two years in jail for helping his ex-wife buy a plot of land in the Ratchada area at a discounted rate. The former prime minister, however, escaped abroad and has lived in self-exile ever since.

Thaksin broke a months-long silence to tell members of the media about his proposed talks and to comment on the draft charter which he claims is harmful to Thailand's fragile economy and seems to prolong the military regime's hold on power.

His is only one opinion and does not hold enough influence to have the draft charter shot down, Constitution Drafting Committee spokesman Amorn Wanichwiwatana said.

The new constitution, dubbed an anti-corruption draft, is being worked on to benefit all parties and its fate will eventually be decided by the Thai people in a referendum, Mr Amorn said.

Stronger checks and balances proposed in the draft charter should serve as a solid foundation for economic development in the long term, added Col Winthai Suvaree, spokesman for the National Council for Peace and Order (NCPO).

"This charter is written to combat corrupt people, so they should not be allowed to jointly draft or hold talks on it," said government spokesman Maj Gen Sansern Kaewkamnerd in response to Thaksin's comments.

The government is ready to listen to all opinions about the draft charter. Thaksin's can be among them, but he has to admit his mistakes and return to face justice, he said.

"If he [Thaksin] still puts himself above the law, any of his suggestions for the charter drafting will certainly be unacceptable," Maj Gen Sansern said.

The fresh conflict between Thaksin and authorities, especially the NCPO, which toppled the administration of his younger sister Yingluck Shinawatra in 2014, may have some political implications that seem to benefit the government, commented Chaiyan Chaiyaporn, a political science scholar at Chulalongkorn University.

While Thaksin may see his comments as an opportunity to consolidate support, Mr Chaiyan said he believes Thaksin's move may be a factor prolonging the NCPO's rule.

"The NCPO can use this as evidence that the Thai political situation is unsettled and the conflict between rival groups still runs deep," he said.

However, Pheu Thai Party heavyweight Noppadon Patama saw Thaksin's move differently. He believed the former PM's comments to the foreign press was not based on his personal interests.

Thaksin spoke out of his sincerity as well as love for Thailand, said Mr Noppadon. 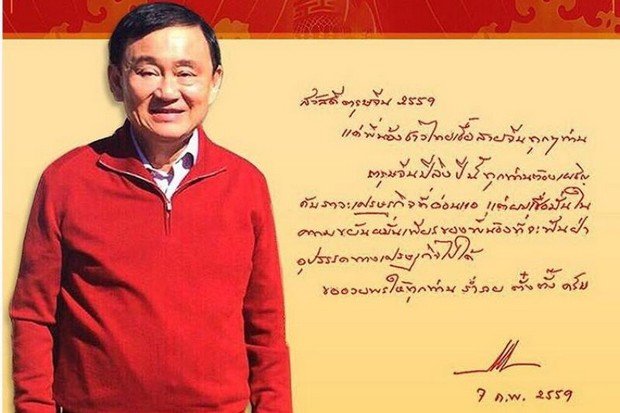 From self-exile in Dubai, Thaksin Shinawatra sent greetings to the nation on Chinese New Year - but the government has quickly rejected his offer for political dialogue.