A number of soldiers went to the house of Watana Muangsook, a former senior member of the Pheu Thai Party, at Sin Kao housing estate on Srinakarin road in Prawet district on Wednesday morning, Post Today online reported.

Some of the soldiers were reportedly deployed around the premises while others entered the house and sat inside.

It was not reported whether Mr Watana was in the house when the soldiers arrived. 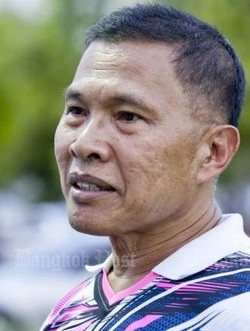 It was believed the soldiers were sent to Mr Watana's house because he had continued to criticise the National Council for Peace and Order (NCPO).

On Tuesday, Mr Watana posted a strongly-worded message on his Facebook page attacking the NCPO for sending soldiers to shadow former prime minister Yingluck Shinawatra and take pictures of her, intruding on her privacy.

He also lashed out at Deputy Prime Minister Prawit Wongsuwon, who is also defence minister, for giving an interview about this matter and showing disrespect for the former prime minister, who he said is a lady.

Matichon online reported that the soldiers went to Mr Watana's house to invite him to meet NCPO officers at the 11th Army Circle headquarters at 10am.

Gen Prawit, when asked at Government House about his matter, confirmed that the soldiers went there to invite Mr Watana to a talk.

He said the NCPO would decide where it would be and for how long.