The junta has ordered raids to arrest some 6,000 "influential criminal figures" and dark influences but critics fear it's a list of political opponents. (AFP photo)

The government has targeted more than 6,000 "influential criminal figures" in a nationwide crackdown, sparking concerns about possible human rights violations and political motivation.

Deputy Prime Minister and Defence Minister Prawit Wongsuwon said a blacklist of more than 6,000 suspected criminal figures has been sent to authorities nationwide.

He stressed that action must be taken against these individuals, no matter who they are and no matter what political affiliations they have.

State officials, police and military officers found to be involved with "dark influences" must also be dealt with, said Gen Prawit, who chairs a government committee responsible for suppressing influential criminal figures.

Gen Prawit denied claims that individuals targeted by the operation oppose the military regime. He insisted that no specific groups have been singled out in the operation, and anyone harming the public must be apprehended.

He said that these influential figures fall into 16 categories, adding that efforts had been made to compile the list for four months. 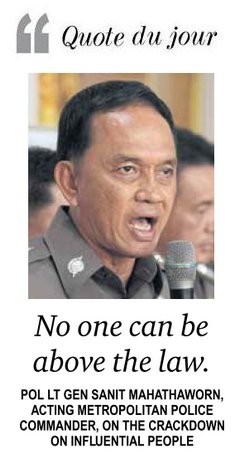 Intelligence units gathered the names for the lists through field work, submitting them to the committee for consideration, Gen Prawit said.

Asked to comment on allegation that former army specialist Gen Trairong Intaratat, better known as Seh Ice, and Capt Thammanat Prompao, a former close aide to Gen Trairong, are among those on the blacklist, Gen Prawit said police will explain the offences they have allegedly committed.

Gen Trairong, said to have close ties to ousted prime minister Thaksin Shinawatra, was among four people mentioned in a leaked document from the 1st Division, King's Guard.

The three others named in the document are Karun Hosakul, a former Pheu Thai Party MP for Bangkok's Don Muang district; Capt Thammanat Prompao, said to be involved in several enterprises including lottery ticket distribution; and Chaisit Ngamsap, alleged to be connected to illegal activities in the Mor Chit area of Bangkok.

Gen Trairong and Capt Thammarat have denied the allegations.

Prime Minister Prayut Chan-o-cha insisted that the crackdown on influential figures is not politically motivated. He stressed that those who break the law must be punished.

"In the future, these people may support politicians. They must not be allowed to break the law and use weapons against people. Today, we must help to clear up the mess to make our country safe," Gen Prayut said.

The number of those involved in illegal loan sharking alone is as high as 3,000, most of whom are based in Pathum Thani and Uthai Thani provinces.

State agencies have also been instructed to find out if any of their officials are part of the networks of influential figures and ordered to take legal action against those involved, she said.

Meanwhile, Siripan Nogsuan Sawasdee, a political scientist at Chulalongkorn University, raised concerns over the lists, warning the government must ensure the crackdown "will not violate human rights or be used as a tool to destroy political rivals".

She added that the government must clearly define the term "influential figures" as it could mean those who have an influence on people's thoughts.

Police spokesman Pol Col Krissana Pattanacharoen said influential figures on the lists include local politicians and "those in uniform" who make life miserable for people.

Police on Tuesday raided eight locations in Nakhon Pathom as part of the crackdown. A large haul of firearms, ammunition and 2 million baht in cash were confiscated during the raids.