Gen Theerachai, secretary-general of the National Council for Peace and Order, said the crackdown would be stepped up over the six-month period, adding that provincial governors, police and local officials must contribute to the campaign. He said there is no deadline for authorities to complete the operation.

The government has sent a blacklist of more than 6,000 suspected criminal figures to authorities nationwide and pledged to take action against them, no matter who they are and no matter what political affiliations they have.

"[The crackdown] covers every sector, including military officers, and pays no attention to [political] affiliations. Why just political elements? Or are these criminal figures in politics, which I don't think they are. They are outlaws and we go after outlaws, so ordinary people can go about their business without worries," he said. 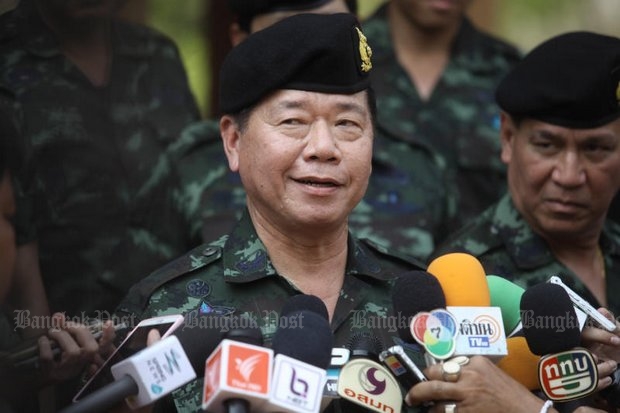 He admitted that state officials were implicated in criminal activities but declined to give details.

National human rights commissioner Angkhana Neelapaijit called for authorities to exercise caution and obey the rule of law. She asked the government to clarify its definition of "influential criminals".

Any arrest must be conducted after a court warrant is issued, she said, adding that suspects must see their basic rights guaranteed, including bail and family visits if detained, and have access to a lawyer and a fair trial.

Vasant Panich, a lawyer and human rights advocate, warned against any special operation, instead wanting to see suspects face the normal judicial process.

"I hope authorities have enough evidence before they put individuals on a blacklist," he said. Lessons must be drawn from the "war on drugs" that occurred during the Thaksin Shinawatra administration, during which many innocent people lost their lives and property, Mr Vasant added.

He expressed concern regarding the government's crackdown on forest encroachment as it would disproportionately affect the poor.