The National Council for Peace and Order wants the next Senate to play an important role in ensuring order in the next government and the country. (Photo by Thanarak Khunton)

An expanded senate that is appointed would include military top brass to ensure order and prevent votes in the next general election from being abused for personal gain, Deputy Prime Minister Wissanu Krea-ngam said on Wednesday.

He was commenting on opinions about the new charter that the National Council for Peace and Order (NCPO) has sent to the Constitution Drafting Committee (CDC).

Other opinions have been submitted by the government, the National Legislative Assembly and the National Reform Steering Assembly.

The four parties wanted the new Senate to have the substantial number of 250 appointed members and remain in office for five years. That was to ensure that people's votes from the next election would not be abused for personal gains, Mr Wissanu said.

Army top brass would sit in the Senate to ensure order and pave the way for national reconciliation. The Senate would not only play a legislative role but also protect the constitution and prevent undesirable situations, the deputy prime minister said. 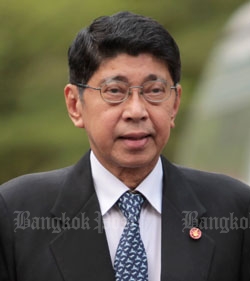 When the CDC agrees to the Senate concept, it can then plan the selection of senators, he said.

Undesirable situations are likely right after the election in 2017, so order must be maintained in the first five years after the polls. Afterward, the situation would be orderly and constitutional amendments would be acceptable, Mr Wissanu said.

He said the government hoped the constitution draft would pass the referendum on Aug 7. Otherwise, another constitution must be drafted.

Mr Wissanu admitted that the present constitution draft did not prohibit an NCPO member and a senator from becoming the next prime minister.

Chavalit Wichayasut, acting deputy secretary-general of the Pheu Thai Party, said on Wednesday that about 1 billion baht has been wasted on two constitution drafting committees which have came up with outdated charter drafts.

Anuttama Amornwiwat, another deputy secretary-general of the party, said the next general election should happen sooner because the restoration of democracy will lead to economic recovery.

Nattawut Saikuar, a leader of the red-shirt United Front for Democracy against Dictatorship, said the Senate plan showed an intention to prolong power because 250 appointed senators and just 126 MPs would make a majority in the parliament.