A pro-regime group has called on the administration to exert its executive powers to ensure reforms are in place before the next election.

Green group secretary-general Jaturon Boonbenjarat said the government and the National Council for Peace and Order (NCPO) should emphasise reform issues over the draft charter, as time was running out.

They must exert Section 44 of the interim charter to mobilise reforms before elections without having to wait for completion of the draft charter, Mr Jaturon said, adding reforms could encompass police, judicial procedures, administration, to social inequality.

Referring to the regime's proposal of a five-year transitional post-election period, which includes an appointed Senate, he said the regime must make clear which issues need reform within the time frame.

Civic networks should speak out on what they want reforms to accomplish, and the regime should speed up efforts to put them in place, he said.

Meanwhile, an anti-charter group scaled up its campaign against the draft Sunday. Four people in the group, called Red Path, walked from Sala Daeng BTS station to the Dusit Thani Hotel in Bangkok's Silom area, distributing campaign stickers to passers-by. Some expressed dissatisfaction with the campaign. 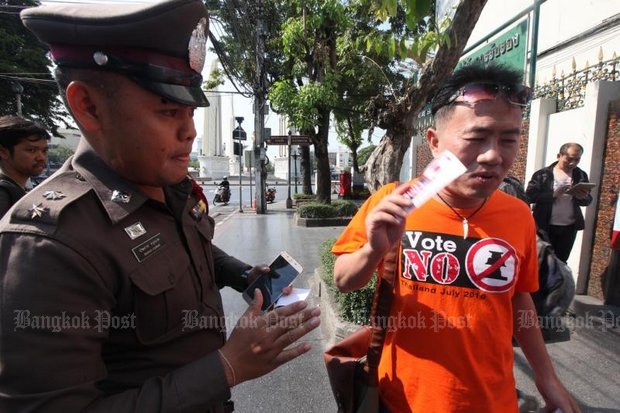 Members of the Red Path group handed out their anti-charter stickers along Silom Road on Sunday. (Photo by Thiti Wannamontha)

A seminar on the draft charter and the country's future reforms was held in Bangkok Sunday.

Paiboon Nititawan, former member of the Constitution Drafting Committee (CDC), said he supported the regime's proposal for an appointed Senate, which he said could help counter-balance the House of Representatives and the cabinet.

The NCPO proposal calls for the CDC to introduce an appointed Senate, with 250 members, during the five-year post-election transition to full democracy and to reserve six seats for the military's top brass who are not currently NCPO members.

The senators, according to the regime, would not be authorised to nominate or vote for the prime minister or cabinet ministers, but they could hold a censure debate to ensure these political office-holders safeguard the constitution and implement national reforms initiated by the military regime.

Mr Paiboon, however, disagreed with the idea that the Senate can file a censure motion against the prime minister, saying this means the upper house would rein in the administration rather than counter-balance it, which could fuel conflicts.

Seri Suwannapanon, chairman of the National Reform Steering Assembly (NRSA)'s committee in charge of political reforms, threw his support behind the selected senators, saying his panel had proposed the issue before the NCPO did.

His committee also backs the idea of allowing outsiders to become the prime minister and said the practice could help break the political impasse.

He said if no efforts are made to ensure order or seek out a balance of power, people would again take to the streets to protest.

He added he did not oppose the idea that civil servants be allowed to sit in the Upper House, but only if they can ensure the country's stability and peace. 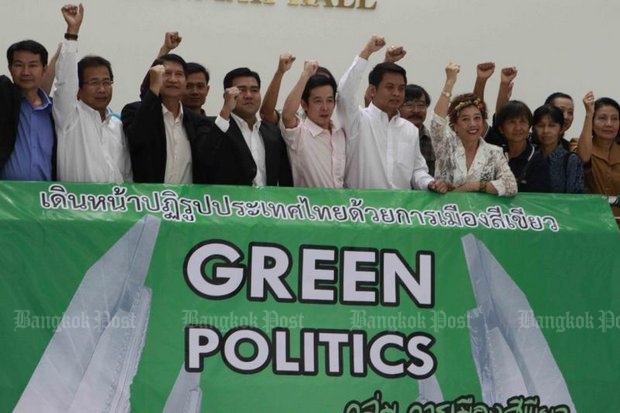 The Green Politics Group, initially an off-shoot of the yellow shirts and People's Alliance for Democracy (PAD) led by Suriyasai Katasila (7th from right) was launched in August, 2011. (Photo by Kosol Nakachol)