These students did not criticise the government, and are ineligible for re-education classes. They were actually showing Prime Minister Prayut Chan-o-cha learning materials while setting up an April 1-24 education fair at Khlong Phadung Krung Kasem market near Government House. (Photo by Thanarak Khunton)

"I initiated the idea myself. In the past, they [critics] were summoned to come and undergo 'understanding' but when they went back their behaviour was unchanged.

"So we need to have a course to train and educate them about ethics and morality as well as good governance so they will no longer criticise the government," he said.

His comments follow the detention of two Pheu Thai politicians -- Worachai Hemma and Watana Muangsook -- who were recently called in for "attitude adjustment", which Gen Prayut admitted may be an ineffectual method for curbing dissent with more foolhardy and stauncher critics.

The detentions could last three, seven or 15 days to a month, and comes ahead of a referendum on the draft charter and upcoming elections, the prime minister said.

"There is also a quota for the media [for the training] but I'm not sure if it can help, but at least I will not hear from you for several days," he told reporters.

All parties are looking to voice their opinions on politics, the premier said. They should therefore be brought to speak to the military about the "right" topics, he said.

"Everyone must understand that the law is the law," Gen Prayut said. People also must abide by special orders and security laws, as well as acknowledge the current political situation is an abnormal one. Such understanding will lead to greater peace and order, he added. 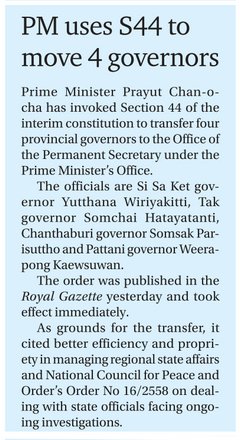 The training courses are not designed to harm the regime's critics, the premier said. The military is not covering their heads with a black bag and taking them to be tortured or murdered. Weighing into the debate, army commander Gen Teerachai Nakwanich said "troublesome" elements must be dealt with. They should be detained for a long time if they are found to be difficult to bargain with, he said.

"Even army privates have a better understanding of things than those people," Gen Teerachai said, adding that the recent detentions of Mr Worachai and Mr Wattana was a "warm up" for the military's upcoming training sessions.

"The country needs to be peaceful now. What are they [politicians] doing for the country?"

Meanwhile, Mr Worachai's lawyer announced yesterday the former Pheu Thai MP for Samut Prakan had now been released after three days of detention and was now back home. However, he was forced to sign an agreement saying he would refrain from expressing opinions critical of the junta and must seek permission prior to travelling outside the country.

Mr Watana, who was detained on Monday, has yet to be released.