The military regime still has a chance of staying in power after the general election, as the final draft of the constitution does not give a specific time for the House to choose a prime minister from the candidate lists submitted by political parties, observers say.

The Constitution Drafting Committee (CDC) handed its final draft of the new constitution to the government Tuesday, with its fate to be decided in a public referendum expected to be held on Aug 7.

CDC chairman Meechai Ruchupan told a news conference that his panel had wrapped up nearly six months of work on the 279-section charter by Tuesday's deadline.

He said that a clause in the draft allows for an outsider prime minister to be chosen, which will act as a precaution against the regime's concerns of possible problems that could disrupt the process to select a prime minister.

The clause requires political parties to submit up to three prime ministerial candidates each before the election, with the House of Representatives then choosing the prime minister from the lists after the poll.

But if the House cannot choose the prime minister for whatever reason, it can propose a motion to convene a joint House-Senate meeting to consider whether to ignore the three-candidate rule. The support of at least 250 MPs out of 500 MPs is required to second the motion.

In order to suspend the three-candidate rule, the support of at least 500 votes from both the House and the Senate which has 250 members is required. Even if both houses agree to suspend the three-candidate rule, the process of nominating and voting for a prime minister outside the political parties' lists will remain exclusively in the hands of the House. At this stage, the Senate will have no role in choosing the prime minister, Mr Meechai said.

Asked why the draft charter does not stipulate a time frame for the House to select a prime minister from the parties' candidates lists, Mr Meechai said the CDC did not want to impose time constraints, but intended for the process to take its natural course.

If there is "a crisis" that makes it impossible for the House to choose a prime minister from the lists, it is up to the MPs to decide whether and when to suspend the three-candidate rule, Mr Meechai said.

He also allayed concerns that the charter provision that allows for the three-candidate rule to be ignored will pave the way for the National Council for Peace and Order (NCPO) to hold on to power.

Observers said as the CDC did not stipulate a specific time frame to choose a prime minister, the NCPO will remain in power indefinitely should the House fail to pick a prime minister.

Mr Meechai argued the provision will be applied only in cases where it is absolutely necessary, and that it is only the MPs who can initiate the process to suspend the rule.

"The NCPO will stay on until a new cabinet takes office," Mr Meechai said.

He also said the charter clause that allows an appointed Senate, with 250 members serving a five-year term during the transition period to full democracy, will help prevent any politicians from pushing for legislation that runs counter to the rule of law. He cited the controversial blanket amnesty bill that sparked anti-government protests in late 2013, that culminated in the May 22 coup that toppled the Yingluck Shinawatra government. 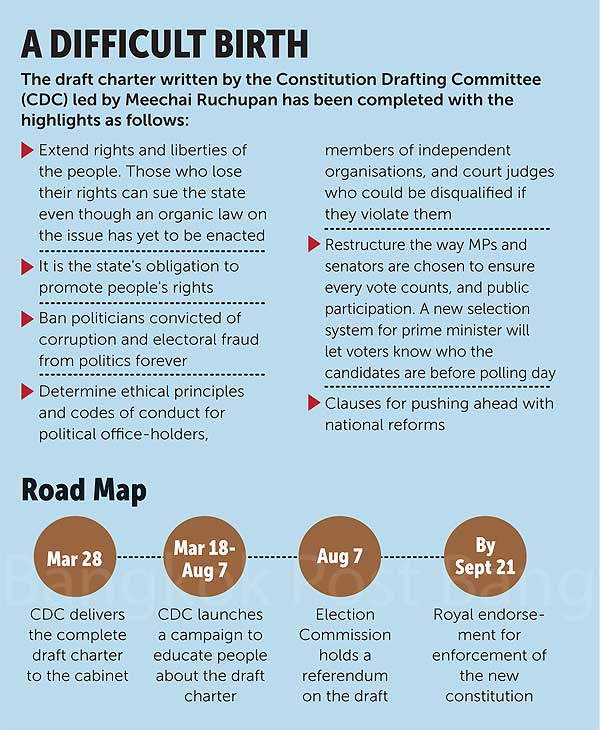 The NCPO will appoint 194 of 400 candidates to be shortlisted by a special nine-member panel and select another 50 from another pool of candidates who will represent 20 professional groups at provincial and national levels. The six other seats will be reserved for the chiefs of the three armed forces and the Supreme Command, the defence permanent secretary and the police chief.

Mr Meechai also said the CDC will finish a summary of the final draft constitution within 15 days and will forward it to the Election Commission to distribute to the public ahead of the August referendum. The CDC will then explain the gist of the document to the public. Chaiyan Chaiyaporn, a political science scholar at Chulalongkorn University, said Tuesday that he supports the charter clause that does not stipulate a specific time frame for the House to choose a prime minister from the lists of three candidates.

He explained the lack of a time frame actually has its merits. The House will have as much time as it needs to choose the prime minister. Without time constraints, the MPs will be not be forced to seek an outsider to meet the deadline, Mr Chaiyan said. If the draft charter fixes a specific time frame, it will make it easy for an outsider to become a prime minister.

For example, if a prime minister cannot be found from the candidate lists within a 30-day time frame, parliament will have no choice but to suspend the rule to find an outside prime minister, he said.