A soldier guards the evidence after loading it onto a military truck in Nan province on Saturday. (Photo by Rarinthorn Petcharoen)

Maj Gen Chainarong Klaewkla, commander of the Peace and Order Maintenance Force of the 38th Military Circle, together with Pol Maj Gen Padon Prapanon, commander of the Nan provincial police, led a joint task force to raid the house of Sirintorn Ramasut, a former Pheu Thai MP for the northern province.

Authorities found 8,862 red bowls screened with the message: "Happy Songkran Holidays. Although the situation is hot, I hope you find coolness from the water passing through this bowl" and Thaksin's signature. They are believed to be gifts from the former prime minister, who was overthrown in an earlier coup in 2006 and fled the country in 2008 to escape corruption charges.

Officers seized all the bowls and Ms Sirintorn did not resist.

Similar bowls, found in the bathrooms of millions of Thai households, are sold for 10 baht each.

On Tuesday, a Chiang Mai woman was arrested for posting on social media a photo of herself with a red bowl bearing Thaksin's message.

She was charged with sedition under Section 116 of the Criminal Code, with a maximum jail term of seven years. The court approved bail on a surety of 100,000 baht.

Prime Minister Prayut Chan-o-cha explained on the same day that the woman was arrested because she had shown support for Thaksin, a fugitive who broke the law, and such an act compromised internal security.

Two Thai Rath reporters, who first reported the news, were also summoned for questioning. They were asked to cooperate as authoritities were concerned that the reports could deepen conflicts in society.

The seizure in Nan on Saturday caps an eventful week in the military government's campaign to stamp out dissent. On Friday the army chief announced that "attitude adjustment" camps were ready to receive candidates for seven-day retraining courses.

That followed an order under section 44 — the "dictator clause" of the military drafted interim charter — giving thousands of soldiers police powers in a crackdown on crime. Critics fear it will be used more against politicians and protesters than against actual criminals. 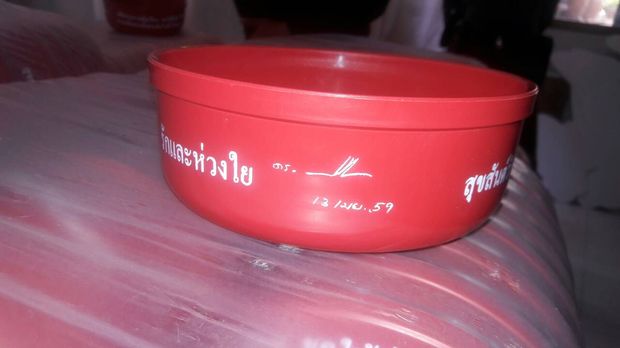 A close-up of the evidence seized by a joint force of police and soldiers. (Photo by Rarinthorn Petcharoen) 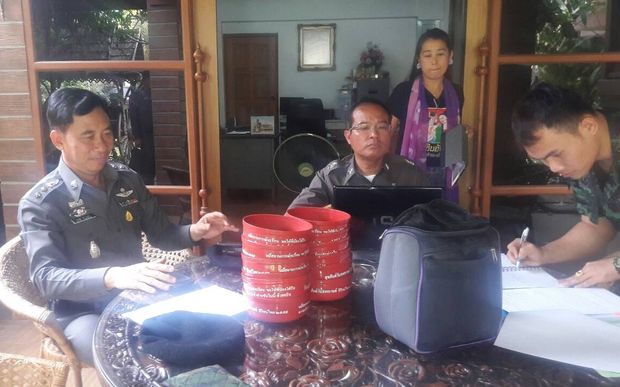