The Democrat Party says it disagrees with a proposal to ask voters whether senators should be allowed to take part in choosing a prime minister as a second question in the Aug 7 referendum on the draft constitution.

The National Reform Steering Assembly (NRSA) voted on Friday to send the question to the National Legislative Assembly (NLA), which will later decide whether the additional question should be asked. The NRSA is allowed only to recommend a question but it the NLA has the final say.

Under the draft charter, the 500 MPs are to choose a prime minister by a majority vote. The NRSA wants the 250 appointed senators to join them in the selection, saying this would help the country move forward.

Democrat Party leader Abhisit Vejjajiva on Saturday said the idea ran against principles and would make it difficult for a government to do its job. 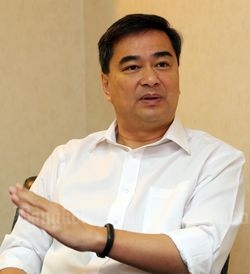 "People are the owner of the country and they have the right to know," says Democrat Party leader Abhisit Vejjajiva on Saturday. (Bangkok Post file photo)

"A prime minister and the government need support from the House in passing laws and budgets, as well as in [surviving] censure debates. The 250 appointed senators should not have the right to overrule the people's will," the former prime minister said.

This is a controversial issue and it is clear that constitution writers disagree with it, he pointed out.

Mr Abhisit also urged the junta to reveal its plan if the charter is rejected in the referendum.

"People are the owners of the country and they have the right to know. It will affect their decisions. If they don't know all the facts, they will have to make the decision blindly."

Responding to Prime Minister Prayut Chan-o-cha's earlier comment that if the charter is rejected, everyone had to bear the responsibility, Mr Abhisit said he agreed because people were the ones who voted in the referendum so they had to face the consequences.

"The problem is that people don't know the alternative so the best they can do is guess. At the same time, if campaigns or dissent are not allowed, it will undermine the objective of the referendum," he said.

"Everyone should be allowed to express honest views on the charter. Once we decide to have a referendum, we need to have faith and respect the people."

In the country's first referendum on Aug 19, 2007, the turnout was 26 million or 57.6% of all 45 million eligible voters. Of the votes cast, 57.8% endorsed the 2007 constitution. The junta of the day had told people before the referendum that if the charter was rejected, it would pick any of the 19 past constitutions and then improve and promulgate it.