Watana not home to get 'invitation'
Thailand
Politics

Watana not home to get 'invitation'

Former Pheu Thai MP Watana Muangsook was not at his home in Prawet district Thursday when soldiers arrived to invite him for talks following his Facebook post opposing the draft charter.

They left empty-handed after apparently arranging to meet him there, with no word to hand on how the regime now intends to respond.

Lt Col Somporn told a maid at the house that Mr Watana said in a phone conversation on Wednesday he would allow soldiers to meet him at his home at 2pm.

The maid replied Mr Watana left the house alone on Wednesday without saying where he would go. The politician had said he would return home on Monday. 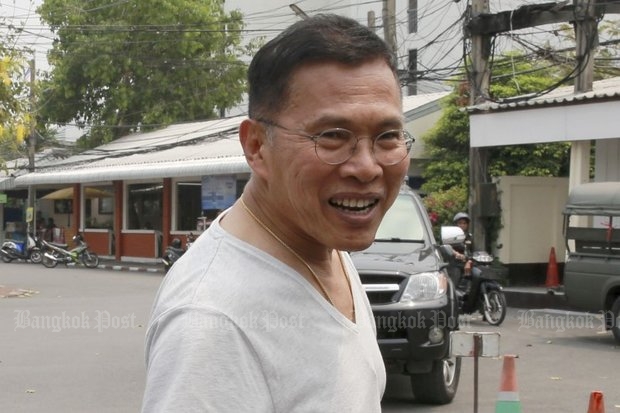 Watana Muangsook: The ex-MP wasn't at home for his scheduled pickup on Thursday by a senior military officer. Mr Watana was ordered in for another attitude fine-tuning. (Bangkok Post file photo)

Lt Col Somporn said he tried to telephone Mr Watana but could not reach him. The officer said he came to Mr Watana's house to invite him for talks and seek his cooperation.

Lt Col Somporn insisted the politician arranged to meet him Thursday and did not request a postponement until Monday, as he had claimed on his Facebook page. Asked what soldiers would do if Mr Wattana did not come forward, Lt Col Somporn said that was a matter for his superiors to consider.

A spokesman for the National Council for Peace and Order (NCPO), Col Piyapong Klinpan, said the arrangement to meet Mr Watana could not be postponed to Monday because it had already been deferred from Wednesday.

He said the invitation for talks came after Mr Watana made a comment which was not constructive. The politician was bent on challenging the NCPO's legal power to maintain peace, Col Piyapong added.

The latest summons came after Mr Watana on Wednesday reiterated his opposition to the draft charter via a post on Facebook which read: "I also reject the draft charter." This is at least the fifth time he has been summoned for an "attitude adjustment".

Following the remark, NCPO spokesman Col Winthai Suwaree said Mr Watana broke conditions restricting him from making political comments. Mr Watana on Wednesday night wrote on Facebook saying he had informed a military officer who contacted him that day that he would be back home on Monday at 11am.

He insisted he did nothing wrong in voicing his opinion about the draft charter. "Giving an opinion on the draft constitution, for or against, is considered the right and freedom of Thai citizens according to Section 4 of the interim constitution," he said.

"While the prime minister and the commander in chief has expressed a supportive opinion for the draft constitution, Thai citizens, including myself, shall be able to suggest a different and opposing view."

He also said the Pheu Thai and Democrat parties also voiced their opposition to the draft before his online post.

Mr Watana re-posted this photo from a supporter to his Facebook account Thursday morning, then disappeared from his home.