A group of academics has slammed the draft constitution, saying it weakens the parliamentary system and restrict people's rights and liberties.

The group calling itself "a network of academics for citizens' rights" held a press briefing Sunday at Thammasat University and read a statement opposing the draft charter drawn up by the Constitution Drafting Committee (CDC) led by Meechai Ruchupan.

The referendum on the draft is expected to be held on Aug 7.

Mr Anusorn said the draft charter curtails the people's rights and liberties and if the draft passes the referendum, it will have far-reaching consequences. 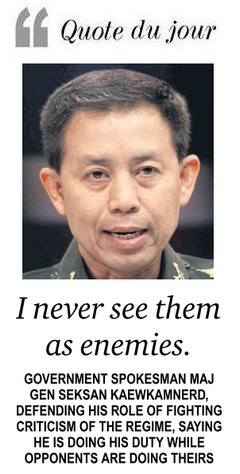 The group said while a constitution is a form of "social contract" agreed on by all sectors in society for the sake of political and social co-existence, this draft constitution was only for the benefit of a certain group of people.

Many provisions in the draft were likely to weaken the parliamentary system. They included one which paves the way for an unelected "outsider" to be prime minister.

The statement said the draft destroyed the rule of law regarding power separation. Judicial and independent organisations, particularly the Constitutional Court, would be given power over parliament and the government, but there were no mechanisms to control those organisations.

The draft charter also allows the state to infringe on people's rights by acting in the name of national security, the statement said.

Also, the draft charter was written in a way that made amendments difficult or impossible, said the statement.

The group called on the National Council for Peace and Order (NCPO) to return power to the people by calling an election as soon as possible if the draft charter fails to pass the referendum, and allow the parliament which takes shape after the election to draft a new constitution and carry out reforms based on fully-fledged democracy.

Mr Anusorn said while the group will continue to hold activities and seminars to discuss the draft charter, it must abide by the law on holding the referendum, which bans people holding campaigns for a vote against or a vote in support of the draft charter.

The bill passed the National Legislative Assembly (NLA) on April 7 and is awaiting royal endorsement before enactment.

Mr Pichit said he was concerned that when the referendum bill becomes law, selective and discrimnatory enforcement could be applied against the draft charter's critics and the public may only receive one-sided information from the CDC and its supporters. The bill imposes heavy penalties for those who disrupt the referendum.