4 'Friends of Watana' held after protest

Four people claiming to be supporters of former MP Watana Muangsook give a three-finger salute during a brief gathering organised by anti-coup activists on the skywalk near Victory Monument. Anti-riot police broke up the demonstration, after the activists demanded the release of the politician who is being detained for defying the military regime's orders to adjust his attitude. (Photos by Wichan Charoenkiatpakul)

Four activists were detained for several hours Tuesday evening when they gathered at Victory Monument to demand the release of former Pheu Thai MP Watana Muangsook who is in military custody for violating a junta order restricting political commentary.

Two of the detained were identified as Anon Nampa, of the Phonlamuang To Klap (Resistance Citizens) group, and Sirawith "Ja New" Seritiwat, of the anti-coup New Democracy Movement.

The activists urged their supporters to wear white shirts and join them at the skywalk near Victory Monument at 6pm to observe a moment of silence. Crowd-control police were deployed at the scene when the activists arrived.

The four were detained and escorted down the skywalk after some pedestrians started complaining. Some supporters flashed a three-finger salute to give them moral support.

It was reported the activists were taken to a military unit at Sanam Pao in a van and then to the Saphan Khwai area to be released three hours later with no charges brought against them. 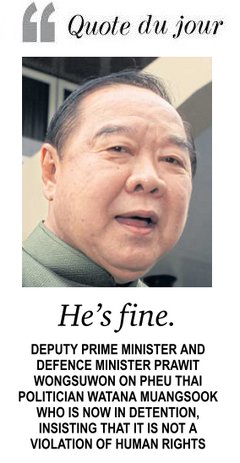 He also claimed that the military did not violate the rights of those detained.

The government is merely seeking cooperation from all parties as they express political opinions, he said, adding that the NCPO has promised elections in 2017 and a referendum is currently being organised and that people must not try to dictate public opinion on the draft charter.

"Let the referendum be the true expression of the people's views," he said.

Meanwhile, the NCPO is mulling legal action against Mr Watana who it accuses of repeatedly violating junta orders.

According to an NCPO source, the former commerce minister could face up to two years' imprisonment and a maximum 40,000-baht fine.

Mr Watana has been detained by the military since Monday after being called to report to the NCPO for his public criticism of the draft charter. The source denied that Mr Watana's comments were the reason for his arrest. The ex-minister breached his agreement with the junta, which he signed upon his release from his initial attitude-adjustment session right after the May 22, 2014 military coup, the source said.

Mr Watana's daughter, Weerada Muangsook, on Tuesday petitioned the European Union (EU), urging the bloc to push for Mr Watana's release as well as to examine his case and other arbitrary detentions by the military. An international or external body specialising in human rights should probe whether the junta's actions have violated international law, she said.

Foreign Minister Don Pramudwinai said Tuesday afternoon he was scheduled to meet with the head of the EU delegation, Jesus Miguel Sanz, in the evening. "Westerners may not be familiar with Thai history. Therefore, they may not understand the country's current situation," he said. 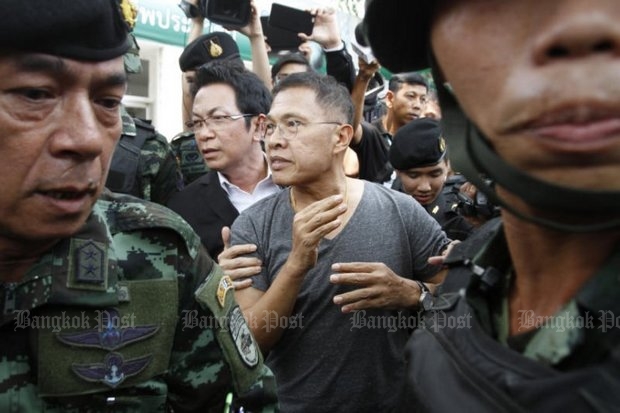 Ex-MP and Pheu Thai member Watana Muangsook was led away Monday by military police and artillery troops, and has not been seen since. (Post Today photo)