The possible charges against Mr Jatuporn and Mr Sombat are being considered following the arrests of eight Facebook users for their online messages criticising the prime minister and the regime, Pol Gen Srivara said.

Based on the investigation findings, one of the suspects, Natthika Worathaiyawich, was hired to operate websites for Mr Jatuporn and Mr Sombat, said Pol Maj Gen Chayapol Chatchaidej, commander of the Counter Crime Planning division of the Office of Police Strategy, who conducted the probe.

EDITOR'S NOTE:
The string of arrests by the military regime in the past two days have triggered the most intense political crisis since the May 22, 2014, coup d'etat.

Here are the main stories our reporters and analysts are covering in this momentous political upheaval:

Pol Maj Gen Chayapol said Ms Natthika was the administrator of several sites that were highly critical of the government and military regime, including "We Love Prayuth", "UDD Thailand", "Red Intelligence" and "Red Democracy". She received 110,000 baht monthly from another suspect, Harit Mahaton, since March 2014 and split the money with five other suspects, who are team members.

Ms Natthika also worked for the "Jatuporn Prompan" and "Peace TV" sites and was paid 20,000 baht per month. She was also allegedly paid 992,500 baht by Mr Sombat to operate sites criticising the People's Democratic Reform Committee from December 2013-March 2014, Pol Maj Gen Chayapol said. The sites have since been shut down.

He said Mr Harit was identified as a content adviser for "We Love Prayuth" and "UDD Thailand" and paid 28,000 baht for his services.

His contact was allegedly Chaitat Rattanajan, a ninth suspect who is currently overseas and was believed to have received instructions from another unidentified person.

The eight suspects have been charged with inciting public unrest under the Criminal Code's Section 116 and breaching the Computer Crime Act for Facebook posts that can be used to instigate chaos.

The charges were levelled against them shortly after their detention by the military. They were escorted by National Council for Peace and Order (NCPO) officers to report to police at the Crime Suppression Division (CSD).

A small commotion erupted when a team of lawyers from the Thai Lawyers for Human Rights Centre tried to get through a police barricade at the CSD and attend the questioning. They were told to wait until the police procedures were completed.

Khoomklao Songsomboon, a representative for the lawyers, slammed the military's handling of the suspects Thursday and the police decision to pick lawyers for the suspects without their consent.

She insisted the suspects have the right to choose their own lawyers. The group also sent a team to lodge a petition with the Criminal Court seeking the release of the eight suspects. The court is scheduled to issue a decision Friday at 10am. 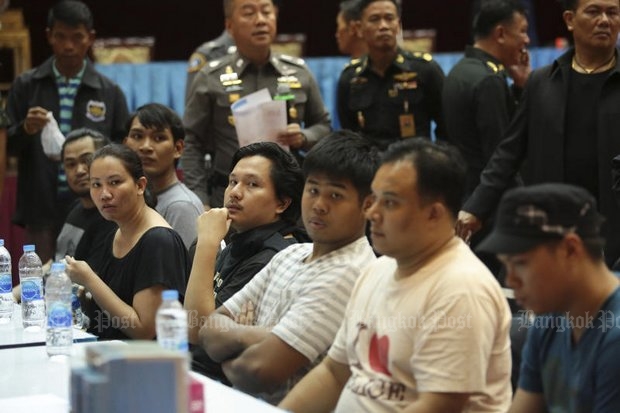 The 'Facebook 8' were presented Thursday at a police news briefing after they were arrested for posting online messages criticising the prime minister and the junta. The Crime Suppression Division filed charges of violating the Computer Act. They were due to appear before a military court Friday. (Photo by Patipat Janthong)

Early in the day, NCPO spokesman Col Winthai Suwaree said the suspects operated as a team as he brushed aside calls by Amnesty International for the suspects' release on grounds that the rights group had insufficient information.

Ten people were rounded up by the military on Wednesday, but two were released shortly after being cleared of any involvement. According to Col Winthai, the charges against the eight suspects are based on evidence and their statements.

The NCPO spokesman also dismissed criticism that the suspects were being treated unfairly as untrue.

Mr Jatuporn on Thursday led a group of United Front for Democracy against Dictatorship members including Natthawut Saikuar and Tida Tawornseth to the 11th Military Circle in Bangkok's Dusit district to meet the eight detainees.

However, their request was rejected by authorities who said the detainees would be brought before a military court.

Mr Jatuporn denounced the regime's actions, saying it should stop the practice of taking people from their homes without being informed of the charges against them and handed over to police.

He said the detention of the eight individuals should be the last as it would create a climate of fear in the run-up to the Aug 7 referendum.

The red-shirt leader reiterated his call for international bodies to observe the referendum and warned authorities not to intimidate the people as it could result in resistance strengthening.

The Pheu Thai Party issued a statement Thursday calling for an amendment to the Referendum Act to ensure that freedom of expression is guaranteed as the charter referendum approaches.