Police escort Sirawith Seritiwat away after he and other anti-coup activists staged a symbolic post-it note protest on the skywalk near the BTS Chong Nonsi station on Sunday. (Photo by Wichan Charoenkiatpakul)

Three anti-coup activists were detained Sunday when they gathered on the skywalk near the BTS Chong Nonsi station to demand freedom of expression from the military-led government.

Sirawith “Ja New” Seritiwat, leader of the anti-coup group New Democracy Movement and members of the Phonlamuang To Klap (Resisting Citizens) group arrived at the elevated walkway in the late afternoon to carry out a symbolic activity in which they distributed post-it notes for people to write protest message and post them on the skywalk or on their bodies.

Police detained Mr Sirawith while he was giving an interview to the media, saying the activity blocked the public walkway.

Mr Sirawith argued that he had not yet done anything, but was still apprehended. He then threw post-it notes in the air and asked the others on his Facebook page to continue the protest before being taken to Thung Mahamek police station along with two other activists.

Earlier, dozens of uniform and plainclothes policemen were deployed to observe and erect barricades on the skywalk after the groups called on supporters to join the activity.

About 9pm, Mr Sirawith posted a police arrest record on his Facebook page which showed he had been charged with littering a public venue, a charge he denied.

He said police also took away for questioning a middle-aged woman who wrote her opinion on a post-it and stuck it on a railing. 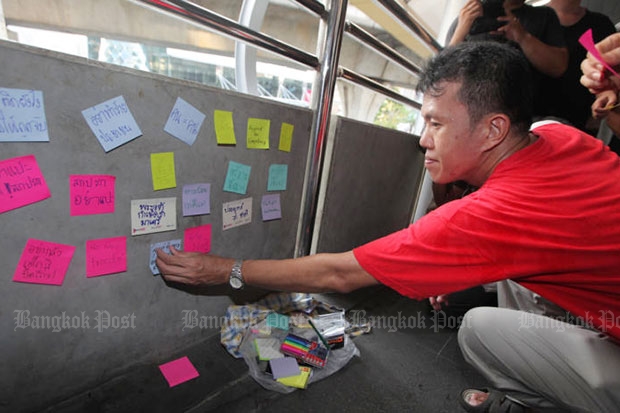