The scale-model replica of the Preah Vihear temple was unveiled in late March on a plateau overlooking the real temple, but has drawn fears it could break relations with Cambodia, owners of the original. (Photo by Wassana Nanuam)

A scaled-down replica of the ancient Preah Vihear temple, announced with fanfare last week as a tourist drawcard, is likely to be demolished to prevent harming relations with Cambodia, a military source says.

The disclosure was made after tourists to Pha Mor E-Daeng, located on top of Khao Phra Viharn National Park in Si Sa Ket, complained the replica remained off-limits to the public.

It was earlier reported the replica -- intended to be an alternative to the real Preah Vihear in Cambodia and to which entrance from the Thai side has been closed -- would soon be open to visitors.

The source said army chief Teerachai Nakwanich was concerned the replica temple, if unveiled, could harm bilateral ties. He did not elaborate.

The Ministry of Foreign Affairs also voiced a similar concern, saying relations with Cambodia were proceeding smoothly and nothing should be done to spoil them. 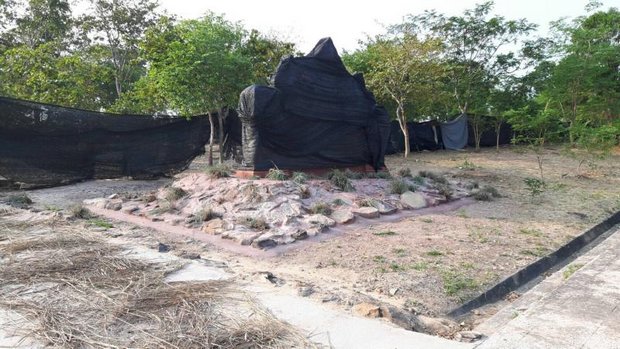 The army has thrown tarpaulins over the entire model, and intends to tear it down to the ground. (Photo courtesy 23rd Ranger Regiment)

Some army officers, however, argued the miniature temple was built on Thai territory, not on a disputed or overlapping area, the source said.

The source said the replica -- built at a 1-to-10 scale of the original temple and on a 600-by-600 metre plot -- was supposed to be a tourist attraction and educate people about history.

The army source noted it was not the first time the 23rd Ranger Regiment in Kantharalak district of Si Sa Ket had commissioned the reproduction of the ancient building.

Many years ago, its craftsmen reproduced a small ancient Khmer temple with no complaints from Phnom Penh.

A military source in the Suranaree Task Force said Cambodia has not reacted to the construction of the replica. The force received a directive from the army to cover the structure before its demolition.