Speaking of the May 9-13 meeting in Geneva, Mr Charnchao, who led the Thai delegation, said the country was praised for improving its citizens' economic and cultural rights, tightening anti-human trafficking measures, and improving healthcare access.

Speaking at the Justice Ministry Sunday, Mr Charnchao said Thailand answered questions put forward by member states on its rights record, which was being reviewed by the UN Human Rights Council.

A list of countries that included Australia, Belgium, the Czech Republic, Germany, Liechtenstein, Mexico, the Netherlands, Norway, Slovenia, Spain, Sweden, Switzerland, Britain and the US asked questions and made 249 recommendations, he added.

At the session, a total of 14 states including Thailand were reviewed by the UN Human Rights Council's Universal Periodic Review (UPR) Working Group.

Despite any positive feedback on Thailand's rights record, the overall sentiment was largely negative.

Points of concern raised covered a wide range of issues including limits on freedom of speech, limits on the right to assemble, the significance of a lese majeste law and unreasonable grounds for arrest, among others, Mr Charnchao said.

Mr Charnchao said Thailand issued clarifications and explanations as to why it is necessary to curb human rights during the current political climate, and the forum was not a chance to single Thailand out.

The review also gave Thailand the opportunity to inform the international community on how well the country is protecting human rights, Mr Charnchao said.

"At the meeting, Thailand exercised its rights to explain the human rights situation. It is not that the country was called by the UN to answer criticisms," he said.

Thailand also explained why the controversial lese majeste law is necessary for the country and why some groups of citizens need to be taken to the military court for their offences, he added.

He said Thailand accepted 181 out of 249 recommendations, while 68 were noted for further consideration.

Some of the recommendations Thailand needs to consider include limits on rights that would affect national security, the lese majeste law, amendments to the Computer Crime Act and the ending of death row and the use of the military court against citizens.

A meeting will be held between state authorities and cabinet members to put forward the 68 recommendations following which the cabinet will be asked to make comments on each. 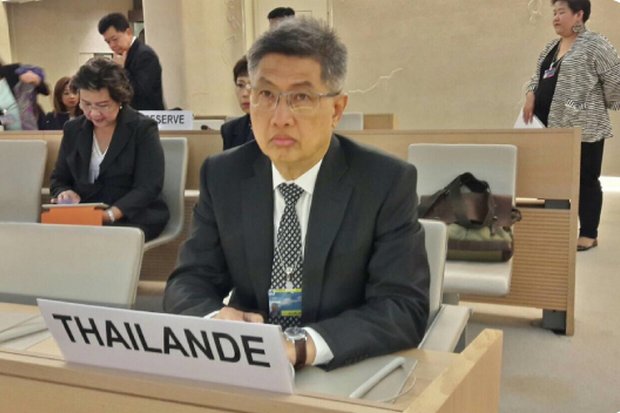 Authorities at the Foreign Ministry and the Justice Ministry will find ways to improve the human rights situation in the country, he added.

Since the 2014 coup, the junta has transformed Thailand into a military state, human rights lawyer Sirikan Charoensiri said last week. Sedition, lese-majese or computer crime laws are being used to target regime critics.

Justice Minister Paiboon Koomchaya said on Wednesday the country should not be shy when defending the lese-majeste law. He said efforts to address the problems reflect the Thai context and do not affect other countries.