The prime minister said the ambassador's negative attitude will backfire.

At the same time, his top Deputy Prime Minister and Defence Minister Prawit Wongsuwon, said that those angered by the opinions should refrain from taking any action against the ambassador.

And Foreign Minister Don Pramudwinai, who also was unaware of Gen Prayut's outburst, called on the public to "get over" Mr Davies' comments.

"Is Thailand a US colony? Have his [Mr Davies'] opinions backfired on him? More Thai people now hold a grudge against him and it's me who has to calm them down," said Gen Prayut.

The confusing reactions came after the US ambassador's statement in which Mr Davies expressed concern over the human rights situation in Thailand during an interview given after meeting Foreign Minister Don last Thursday.

Because the meeting prior to the interview did not touch upon human rights, the US ambassador's remarks have sparked criticism that he failed to show good manners by not discussing the issue with Mr Don directly.

In return, several critics closely identified with the Bangkok Shutdown movement have strongly attacked the US envoy. Former politician and Rangsit University rector Arthit Ourairat demanded that the government declare the ambassador personna non grata and boot him out of the country.

Democrat Party deputy spokesperson Mallika "Molly" Boonmeetradkool Mahasook posted an image of Ambassador Davies superimposed with "Get Out" (in photo above) last Saturday and drew nearly 5,000 "likes" by Monday evening.

Gen Prayut said the ambassador's remarks reflected his lack of knowledge about what is actually going on in Thailand.

"The ambassador likely based his comments on general US democratic principles and information he gleaned from media reports," said Gen Prayut.

"Although we're a small country, we have to act like a grown-up. I'm not a kid any more, so I won't fight with anyone over this kind of thing."

Deputy Prime Minister and Defence Minister Prawit said he was concerned about of Thais offended by the US ambassador's remarks.

Gen Prawit promised that, "for the sake of good diplomacy", the Thai government will take good care of the US ambassador.

Mr Don called on the public to get over the US ambassador's comments, "in the interests of Thai-US relations". 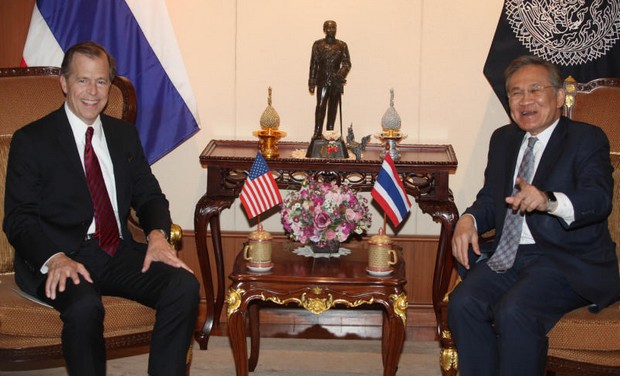 At first, the foreign minister described Mr Davies' statement as a slip of the tongue but later said may have been intentional. The US envoy read his remarks, a direct quote from a State Department spokesman, from a printed paper.

Asked if the US ambassador had contacted him to apologise after the interview, Mr Don said Thailand should look beyond this matter while Mr Davies should to try to better understand the country.

Mr Davies' actions, and those of Mr Don after their May 12 meeting, have been a major subject of online forums.

Right after his 90-minute meeting with Foreign Minister Don last Thursday, Mr Davies read the statement to the Thai media, word by word, that had been issued in Washington by Katina Adams, the State Department's spokeswoman for East Asia and the Pacific.

"The United States was troubled by the recent arrests of individuals in connection with online postings, and the detention of Patnaree Charnkij" (mother of Resistant Citizen dissident Sirawith "Ja New" Seritiwat) Mr Davies read from the statement.

"These actions create a climate of intimidation and self-censorship.”

Matichon Online reported that while he was reading, Mr Don appeared dissatisfied. He sighed deeply several times and the papers in his hand shook.

When Mr Davies finished reading the statement, Mr Don briefly interrupted him and said "Pardon me. When we discussed upstairs, they might be too gracious to bring up all these points, the points that he just raised with you".

Mr Don added that all the public needs to know is that the US never used a word or connotation which could be interpreted as "condemnation".

The exchange was in English. 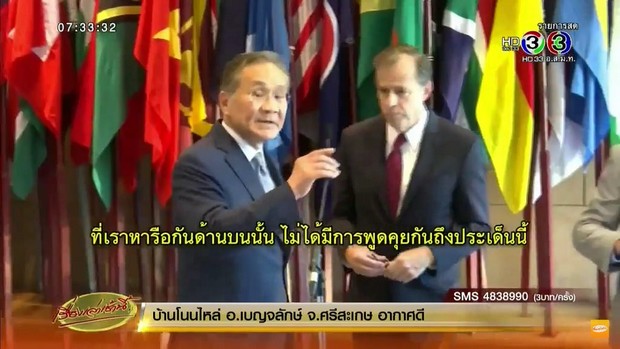 Mr Don spoke to the Thai media immediately after Mr Davies read the statement by the Washington spokesperson. (Screen grab from TV Channel 3)

"Again, I don't want to keep you too long here," Mr Don then said to the media. "But please, when you want to interpret it, whatever you had, there's no word which signified condemnation. I want you to hear correctly. There was no single word which carries the connotation of condemnation," Mr Don continued.

Mr Davies then said: "I can confirm that. You did not hear me use the word condemnation in what I just spoke".