Voicing an opinion 'makes you a target'

Ahead of the second anniversary of the coup this Sunday, human rights lawyer Sirikan Charoensiri -- who is defending 14 anti-coup activists in court -- is grappling with a legal headache after police forwarded criminal charges against her to the prosecutor's office.

The lawyer is accused of concealing evidence for refusing to let soldiers search her car without a warrant earlier last year.

Only a day after the junta's order 13/2559 took effect in March, Thaweesak Enkvang, a Pathum Thani resident, was arrested and taken into military custody.

The order equipped soldiers with sweeping powers to suppress crimes including libel, human trafficking, narcotics and weapons dealing, but Mr Thaweesak's only misdeed was protesting against the construction of a waste-to-energy plant next to his home.

These cases are two among hundreds that reflect the National Council for Peace and Order's (NCPO) efforts to suppress freedom of expression. 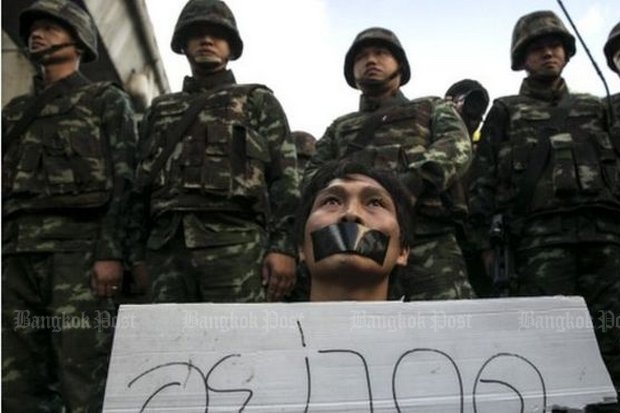 The military has kept a tight grip since taking power on 22 May, especially on free speech, although tiny protests are sometimes allowed for a short time. (AFP photo)

Yaowalak Anuphan heads the Thai Lawyers for Human Rights Centre which has handled scores of anti-coup and freedom of expression-related lawsuits since May 22, 2014.

She said that in the aftermath of the coup, the NCPO was set on silencing four groups: politicians, anti-coup activists, academics known for their pro-democracy stance and individuals accused of lese majeste.

However, the military has since broadened its scope with more people now caught in its net for allegedly insulting the monarchy, stirring unrest, disagreeing with the government's policies or simply sharing information, she said.

Human rights violations are common after two years of junta rule, while restrictions on freedom of opinion getting tougher by the day, rights advocates argue.

Today, anyone who expresses dissenting thoughts is at risk of becoming the regime's next target, they said.

Last December, a factory worker known as Thanakorn was arrested for creating an online post called "Uncovering the Rajabhakti Park Corruption Scam", widely shared at a time when suspicions surrounding the project were the talk of the town.

He was charged with violating the Computer Crimes Act and with lese majeste on different grounds.

"The military has moved on from its pinpoint strategy to more broadly scrutinising citizens' opinions," Ms Yaowalak said, adding Thailand under junta rule is an "Orwellian society", where many experience fear and must censor themselves.

Tactics to silence regime critics range from intimidation and threats, such as house visits and summons by the military, to arrests and detention -- sometimes arbitrary -- followed by legal charges that often carry heavy punishments, the lawyer added. 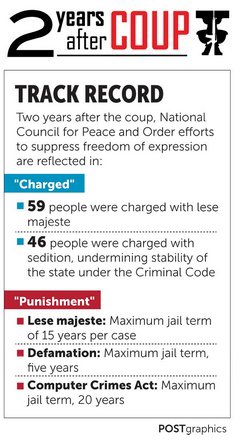 She said the junta's tight grip and refusal to brook any criticism highlight its insecurity. As the regime banned political gatherings, the internet has become a prime communication channel and platform for information-sharing and debates.

The number of arrests and criminal lawsuits against dissenters for online posts and comments have risen in the past two years.

"The NCPO is accustomed to operating in military camps. They do not know how to deal with an open society, where there is bound to be criticism," she said.

The regime is intent on perusing individuals' words and opinions, to the point of violating internet users' privacy, she added.

But the alleged evidence against them consisted not only of their public posts, but parts of their private chat messages as well.

Human rights violations under the NCPO's rule are perpetrated in the name of the law, Human Rights Watch senior researcher Sunai Phasuk warned.

The regime has come to use both "ordinary" criminal laws such as Sections 112 or 116 of the Criminal Code -- the lese majeste and sedition laws -- to silence opposition, as well as tools of its own creation. The latter include several orders under Section 44 of the interim charter, such as the ban on political gatherings introduced to replace martial law.

The militarisation of the judicial process, with civilians being tried in military court, and wide interpretation of the law, facilitates the clampdown on critics, he added.

Ms Rinda was charged with violating Section 116 of the Criminal Code and the Computer Crimes Act, after posting accusations that Prime Minister Prayut Chan-o-cha illegally transferred money to Singapore. Legal experts agreed the case was one of simple defamation. The military court later had to drop the suit.

"The scariest part about the NCPO's human rights violations is they are open-ended," Mr Sunai said.

Two years on, the premier has used Section 44 of the interim charter to issue many new orders, he added. His powers are total, unbalanced and unchecked, while those operating under him are also exempt from taking responsibility for possible abuses.

"There is no end in sight, as this regime has made it clear that it will hold on to power," he said, adding that with or without elections, the NCPO has proven it will maintain its grip.

The political climate is likely to heat up in the months leading up to the referendum.

This article is the fifth in a seven-part series on the second anniversary since the National Council for Peace and Order seized power on May 22, 2014.