Thaksin alleged Sondhi defamed him while addressing PAD supporters at a rally at Government House on Oct 14, 2008. Sondhi accused Thaksin of infringing on the monarch’s powers, buying grass-roots voters, taking control of the police and bribing certain high-ranking military officials to weaken the royal institution.

His speech was broadcast live on ASTV News 1 satellite TV channel and also published on the website of the Manager daily newspaper. 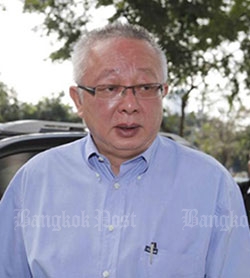 The judge said although Sondhi’s statements - in which he said: “Now I don’t know that the press, columnists, and those working in the TV business are stupid or pretend to be, for not realising that the government under the leadership of Thaksin Shinawatra used money to buy some bureaucrats and people” - were defamatory towards Thaksin, the defendant argued that there were other suspicious individuals who had political ties with the former premier as well as his close aides and henchmen such as Robert Amsterdam, Thaksin's former lawyer who was accused of violating lese majeste law.

The court found Sondhi’s suspicions about Thaksin were genuinely felt and not therefore deemed an act of defamation. It ruled his criticism and expression of opinions regarding national administration and public affairs were carried out “in good faith” both as an individual and member of the press, an act permitted under Section 329 (3) of the Criminal Code.

After the ruling, Sondhi declined to talk to reporters and quickly left the court.