A Reflection on Thailand’s ASEAN Chairmanship in 2019

Thailand’s ASEAN Chairmanship officially ended on 31st December 2019. ASEAN continues to carry the torch by handing over the Chairmanship to Viet Nam according to the tradition of alphabetical rotation of the Chairmanship amongst Member States. Like the stalks of padi in its emblem, ASEAN’s progress is the result of the accumulated efforts of all its members, inspired by their forefathers and driven by shared interests. Nonetheless, if one might ask what legacy the Thailand’s Chairmanship has left for future citizens of ASEAN, there are a few things we can proudly mention.

Thailand enjoyed the support of ASEAN and the international community as we carried out the theme of “Advancing Partnership for Sustainability”, seeking to promote sustainability in all dimensions — or the Sustainability of Things (SOT) — by forging partnerships with relevant stakeholders, both inside our region and with the international community. Thailand has been consistent in “advancing partnership” and “promoting sustainability” to steer ASEAN safely and smoothly through the seas of change and uncertainties.

On “Partnership”, ASEAN Member States and Dialogue Partners significantly enhanced their cooperation. In particular, we were able to strengthen ASEAN centrality in the regional architecture through the adoption of the ASEAN Outlook on the Indo-Pacific (AOIP) and the conclusion of the negotiations on the Regional Comprehensive Economic Partnership (RCEP).

The AOIP is ASEAN’s vista in engaging with the world while maintaining ASEAN centrality amidst varying visions on how the region should evolve. The AOIP is based on the “3Ms” principle of mutual respect, mutual trust, and mutual benefit, and four areas of cooperation. That is, sustainable development, connectivity, economic and other possible areas of cooperation, and maritime cooperation.

In addition, the conclusion of the negotiations on the RCEP not only means enhanced facilitation of trade flow among countries that account for 30 per cent of global trade, but also signifies ASEAN’s strong commitment to the principles of free trade and multilateralism, at a time when these principles are increasingly questioned.

At the beginning of the year, when Thailand announced its intention to conclude the RCEP during its chairmanship, there was an initial sense of doubt and improbability in the air from observers and the media, given that only seven from the twenty chapters of the agreement were completed after half a decade of negotiations. Through perseverance and close cooperation in the spirit of partnership, fifteen RCEP Participating Countries managed to conclude the remaining 13 chapters within one year, accomplishing this feat by the 35th ASEAN Summit and Related Summits in November 2019. We now look forward to its signing this year.

In his closing remarks at the 35th ASEAN Summit, Prime Minister Prayut Chan-o-cha stressed the “3Cs” needed for the sustainability of ASEAN — Complementarity, Continuity, and Creativity. These 3Cs provided the impetus for combining efforts and coordinating strategies to accomplish goals beyond our potentials. It is along this line that ASEAN and its Dialogue Partners have been successful, for the first time, in “connecting the connectivities”, enhancing links amongst different connectivity strategies in our region. Under this unique approach, progress has been made in synergising the Master Plan on ASEAN Connectivity (MPAC) 2025 with China’s Belt and Road Initiative (BRI) and Japan’s Quality Infrastructure Initiative respectively, as well as developing projects within the ASEAN Plus Three.

Moreover, ASEAN issued the Declaration on Industrial Transformation to Industry 4.0 and expedited the ASEAN Single Window (ASW) network for customs clearance, which became operational for the first time on 30th December 2019. The ASW is expected to minimise redundancies, save time, reduce costs for the private sector as well as increase transparency in the trading process among ASEAN Member States. The ASW is indeed a great accomplishment in cementing the ASEAN Economic Community and will certainly help facilitate trade between ASEAN and the rest of the world, which accounts for some three-fourths of ASEAN’s total trade.

On “Sustainability”, Thailand views this concept beyond the scope of sustainable development. It is rather a solid foundation that can render long-term outcomes, or what Thailand refers to as the “SOT”. Thailand sees a clear and inseperable linkage between “sustainability” and “continuity” because to make things sustainable, a viable course of action is to continue the work that has already been tested and proven beneficial. Thailand thus carried on and tried to add value to the mission of previous Chairs further as much as possible, be it the “partnering for change” theme of the Philippines, or ASEAN smart cities, as initiated by Singapore.

We made our ASEAN voice stronger on global issues, particularly on those that have adverse impact on the sustainable livelihood of our people. Through adoption of the Bangkok Declaration on Combatting Marine Debris in ASEAN Region, initiating the ASEAN Network for Combatting Illegal, Unreported and Unregulated (IUU) Fishing, and advocating ASEAN’s common position at the G20 Summit in Osaka, UN Climate Action Summit 2019 in New York, and UN Climate Change Conference (COP25) in Madrid, we have made ASEAN more visible and relevant on the regional and international stage.

The next generations of our ASEAN Community were at the forefront of our minds when we tried to picture all the things that would truly make a better difference to the lives of our peoples. To prepare our children for the Fourth Industrial Revolution (4IR), an ageing society, and possibly risks of more catastrophic natural disasters, ASEAN has put more emphasis on human capital development to ensure that they have creativity — the last of the 3Cs stated by Prime Minister Prayut — so that they can adapt to any present and future challenges.

At the same time, seven ASEAN Centres in Thailand were launched during Thailand’s ASEAN Chairmanship. These are the ASEAN Centre for Sustainable Development Studies and Dialogue, ASEAN Centre for Active Ageing and Innovation, ASEAN Centre of Military Medicine, Disaster Emergency Logistics System for ASEAN, ASEAN-Japan Cybersecurity Capacity-Building Centre, ASEAN Training Centre for Social Work and Social Welfare, and ASEAN Cultural Centre. All of these achievements highlight ASEAN’s journey towards an ever caring and sharing ASEAN Community, and ASEAN’s forward looking vision to build a stronger Community for our future generations. This is Thailand’s investment in ASEAN’s future and a reflection of our country’s faith in the ASEAN institution.

Lastly, one of the more popular legacies from Thailand’s ASEAN Chairmanship is ASEAN’s decision to bid jointly for the FIFA World Cup in 2034. We were heartened that ASEAN will collaborate with FIFA in four areas, as stipulated in a Memorandum of Understanding signed between the two sides in Bangkok. These include sports integrity, sports for development, FIFA’s Football for Schools Programme, and professional capacity building. ASEAN’s joint bid for the FIFA World Cup has ignited a spark amongst the younger generations.

In sum, ASEAN touches and can benefit all aspects of our lives, ranging from military medicine to cybersecurity, from trade facilitation to connectivity, and from public health to a shared voice on the global stage.

Thailand is dedicated to realising a people-centred ASEAN Community that provides long-term, tangible benefits to all ASEAN peoples, that leaves no one behind, and looks to the future of our region, our world, and our planet. Thailand stands ready to work with the next ASEAN Chair, Viet Nam, in driving forward a stronger ASEAN that is inclusive and sustainable, thus underscoring Thailand’s continuing contribution to the ASEAN success story, beyond our legacies in 2019. 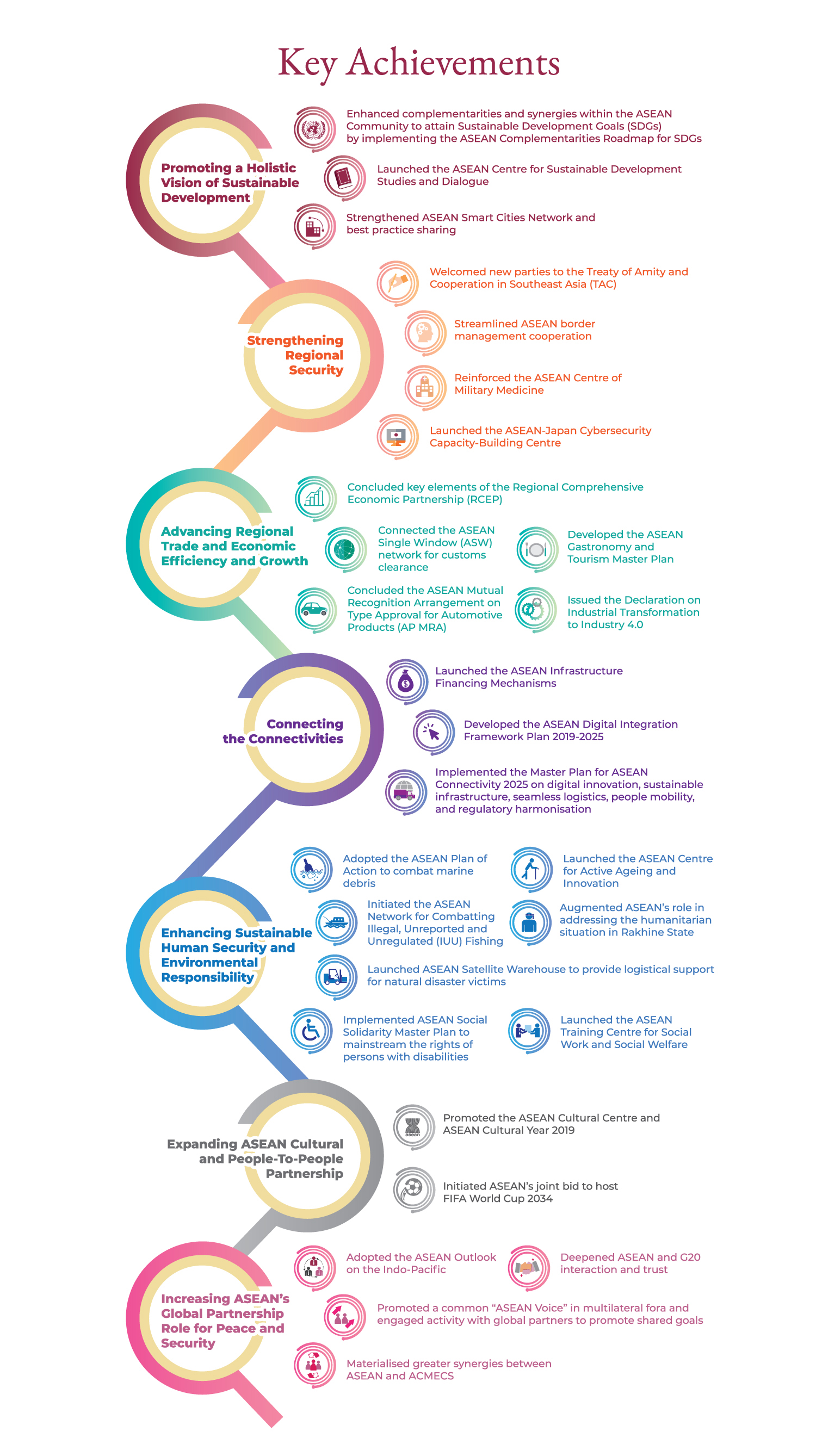 THIS NEEDS TO BE EDITED BEFORE IT IS ENABLED!!! Frist time for Thailand held the global education conference "Forum for World Education 2022".