Bangkok Marriott Marquis Queen’s Park embarks on an exciting new voyage today, with the launch of Sirimahannop, the elegant tall ship and the largest three-masted vessel in Thailand, which has been transformed into a luxurious dining and event destination and an iconic landmark to showcase Asiatique The Riverfront’s spirit and history of Thailand on the bank of the Chao Phraya River

The Chao Phraya River is the heart and soul of Bangkok, and the country’s cultural allure that appeals to both locals and international visitors. Lands along the banks of the river are also considered prime locations where projects and developments continue to boom. One of the capital’s riverside landmarks is Asiatique The Riverfront by Asset World Corporation Public Company Limited (AWC).

With the timeless allure of the Chao Phraya River and Bangkok’s reputation as one of the world’s prime tourism destinations, AWC once again launched a phenomenal project worth 135 million baht: Sirimahannop. The 58.50-by-11-metre maritime marvel is permanently docked at the pier of Asiatique The Riverfront and managed by Bangkok Marriott Marquis Queen’s Park, to become a world class iconic landmark that attracts visitors from far and wide across the globe.

Sirimahannop is a replica of a glorious Royal Thai navy ship, used by The Royal Thai Navy, during the reign of King Rama V (1868-1910).The vessel played an important role in transporting teak wood and other goods to be sold in Europe; upon return, carrying coal to Bangkok. It was also one of six ships that protected the Thai capital from invasion in the Franco-Siamese War in 1893. Sirimahannop reflects the spirit of Asiatique, an area that once flourished as Thailand’s first international pier back in the days when other countries in Asia were under threat from European superpowers.

His Majesty King Chulalongkorn’s exceptional vision prompted royal initiation to elevate Thailand’s status in the global community. His Majesty nurtured state relations with Denmark and later allowed the vessel’s former captain, Hans Niels Andersen, to establish the famous East Asiatic Trading Company, to trade teakwood between Thailand and Europe. The commercial bond founded on the East Asiatic Pier on the grounds of present-day Asiatique, played a significant role in maintaining Thailand’s independence and sovereignty until this day.

Now, having been built to reflect the famous vessels former glory, Sirimahannop is ready to transport guests back to an enchanting bygone era of Thai heritage with timeless and elegant décor, historic photographs and everyday utensils that vividly showcase life in the glorious olden days. 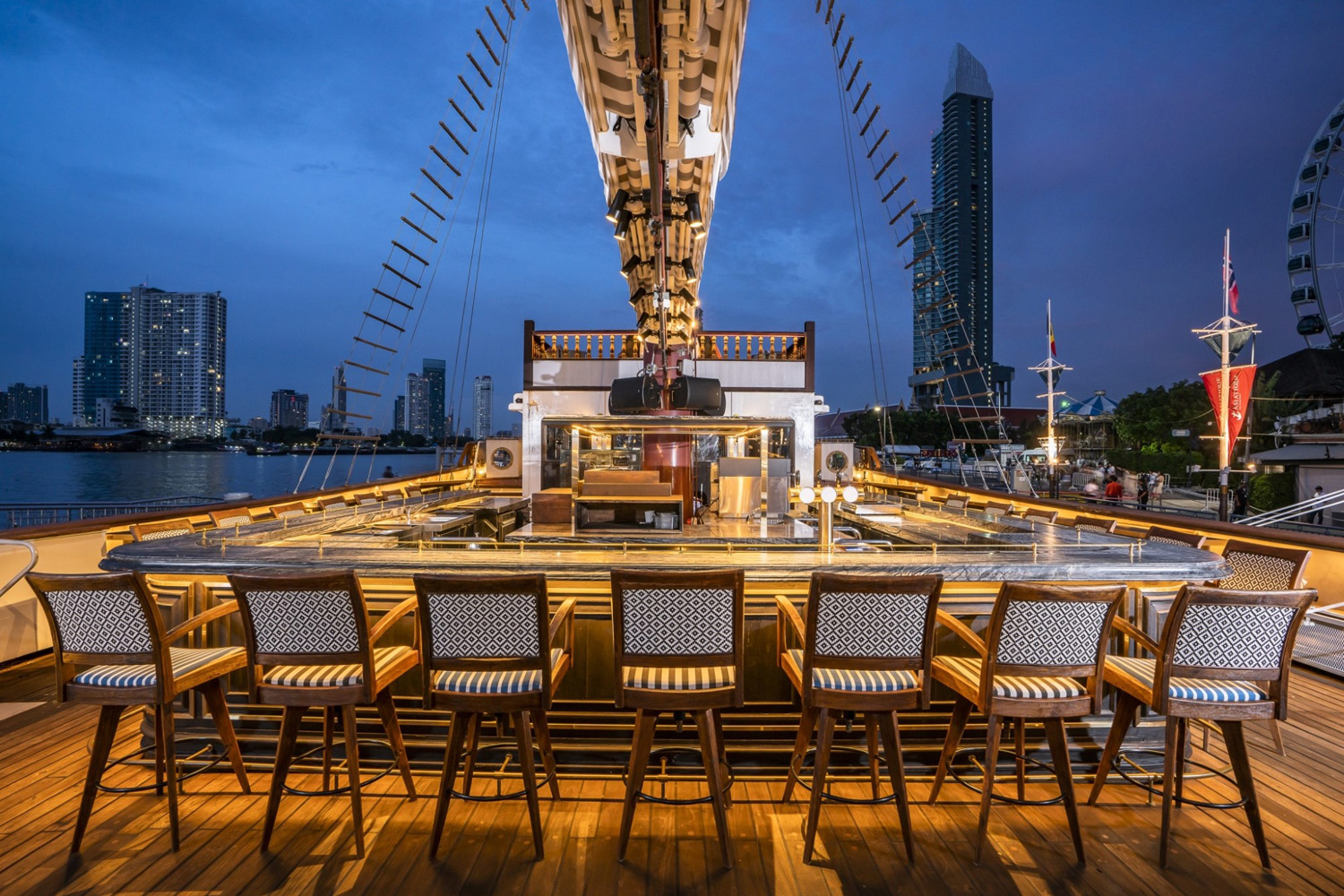 Sirimahannop can accommodate up to 300 guests across two levels: the Upper Deck and Lower Deck. The Upper Deck is a venue where up to 200 guests can wine and dine al fresco with breath-taking views. Diners can treat their taste buds to bite-sized delicacies and decadent sharing baskets – perfect for social occasions with family or friends. Casual stool seating runs along the starboard side, allowing observers to soak up the hustle and bustle of life along the “River of Kings”, and DJs spin cool tunes, creating a lively atmosphere. Regular entertainment will also be staged, including live bands, shows and themed parties.

For truly refined dining, The Bridge is an intimate area where small groups of up to six guests can enjoy carefully crafted three-, four- or five-course menus that fuse the flavours of Thailand, Scandinavia and many exotic ports in between. Advance reservations are required. At the captain’s invitation, passengers can open the hatch to a hidden rum bar and sip the sailor’s “tot” – the daily allocation of alcohol once given to every seaman.

Descending to the Lower Deck, diners will enter an enchanting indoor zone with 100-persons capacity that can cater for glamorous gatherings, talk-of-the-town parties, wedding receptions and more, safely sheltered from the elements. Two private rooms can each cater for up to six people, with exquisite food and drink.

“We are excited to welcome the world aboard Sirimahannop. This traditional tall ship will now take a journey back in time to the reign of King Chulalongkorn, Rama V – one of the most illustrious periods in Thai history. This regal vessel will set the scene for unforgettable evenings and one-of-a-kind events, with world-class cuisine and drinks, while also shining a light on the Kingdom’s rich maritime heritage. Whether you’re seeking a stylish venue for drinks with your loved ones or an exclusive setting for special occasions, Sirimahannop will take you on a magical and memorable voyage,” commented Simon Bell, General Manager of Bangkok Marriott Marquis Queen’s Park.

Guests are welcome aboard to indulge in fine Thai cuisine and international dishes, prepared by talented chefs. At the bar, savour craft cocktails and signature drinks by professional mixologists who create their recipes from the maritime heritages of each country on every continent, resulting in flavourful rum-based creative cocktails inspired by Thai woods served with chocolate and dried fruits. 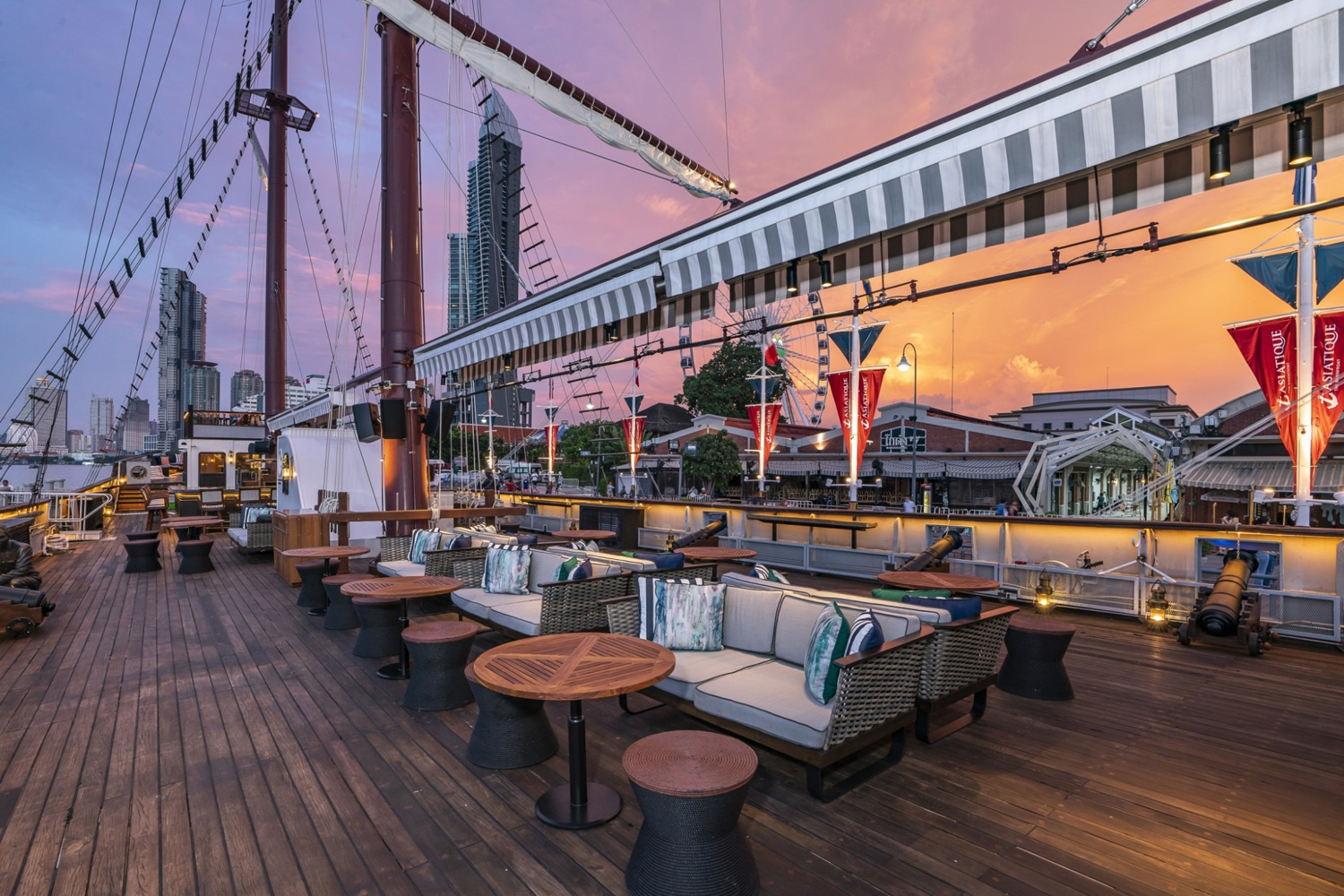 Experience the spirit of Asiatique The Riverfront, with the majestic Chao Phraya River as backdrop and ancient maritime charm aboard the Sirimahannop, officially launched on Thursday 15 October 2020. Operation hours are 16:00-24:00 Monday-Friday, 12:00-24:00 on Saturday, Sunday and public holidays. Permanently docked at Asiatique The Riverfront, it is easily accessible by road and river, including complimentary shuttle boat services from the pier next to Saphan Taksin BTS skytrain station.

For more information about Sirimahannop, please call +66 (0) 2 059 5999 or email sirimahannop@marriott.com.

Connect with us via these channels:

Villager injured in gun attack, another found dead in Pattani

State of emergency extended to Jan 15