The Ministry of Public Health revealed that Thailand has ordered 63 million doses of the Covid-19 vaccine to start building national immunity and more doses can be added. The procurement process has been done in a transparent, cost-effective, and verifiable manner. The vaccinations are planned to be completed within 2021.

Dr. Kiattaphum Wongrajit, Permanent Secretary, Ministry of Public Health, said, “The ministry has planned vaccine deals since April 2020, giving priority to quality and safety. The Thai government has secured 63 million doses – 61 million from AstraZeneca and 2 million from Sinovac – to build national immunity, control the epidemic, and boost the economy.”

Dr. Kiattaphum added, “Currently, Thailand has good control over the virus, low mortality rate, and lower spread than many other countries due to good cooperation between government and the public. The vaccine will serve as another tool to provide national immunity. Therefore, Thai people are invited to receive a vaccination and are requested to continue wearing a face mask, practicing social distancing, washing hands, and scanning the Thai Chana QR wherever they go to help avoid infection.” 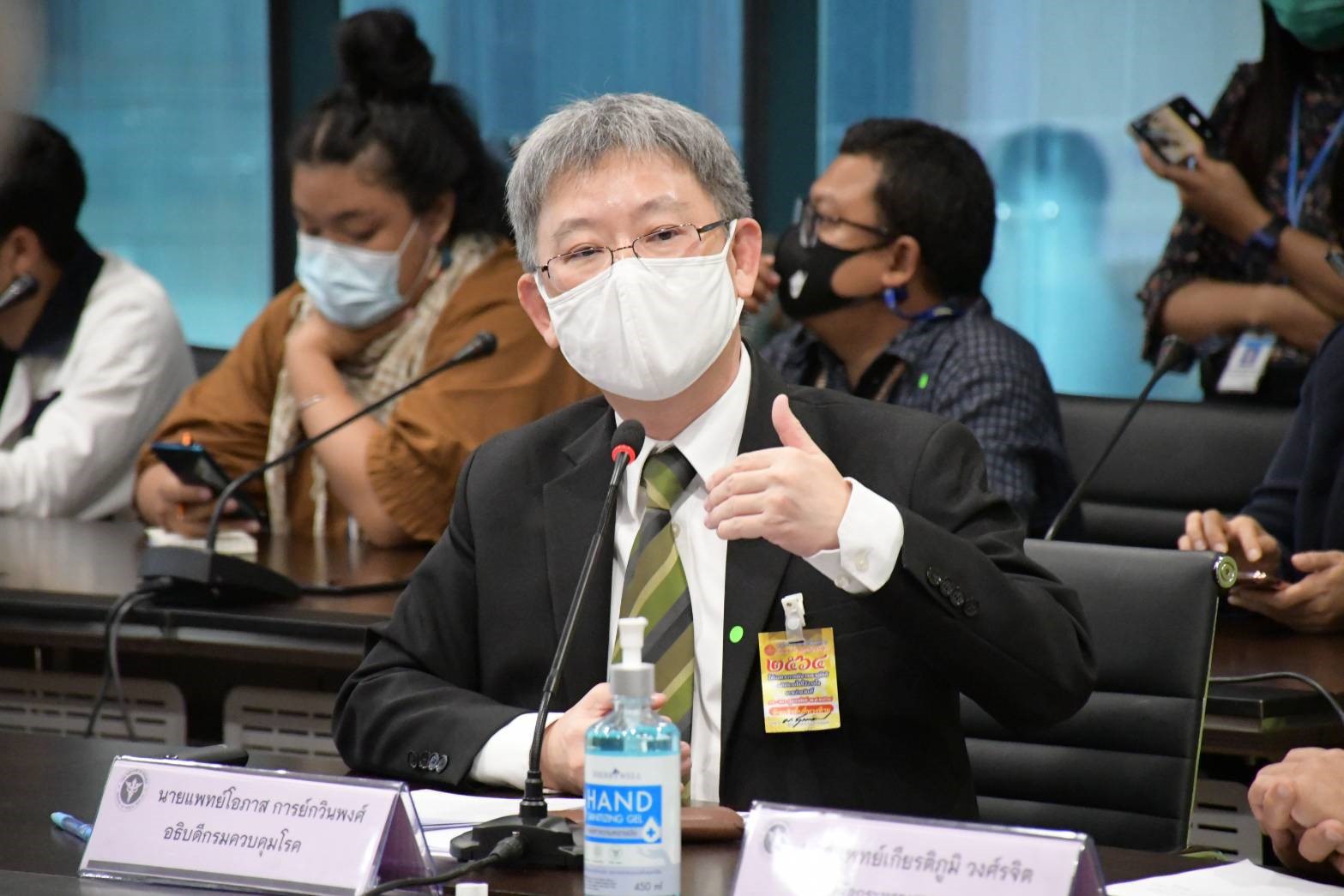 Dr. Opas Karnkawinpong, Director-General, Department of Disease Control (DDC), said, “The government, led by the DDC, has planned the vaccinations since 2020, with three key goals: reduce morbidity and mortality with clinically-proven AstraZeneca and Sinovac vaccines; protect the country’s healthcare system especially medical personnel, and; help the country return to normal conditions with economic and tourism recovery. The ultimate aim is to cover as many Thai people as possible to prevent further outbreaks.”

The vaccinations will occur in three phases. During the first phase, the limited number of Chinese vaccines, developed traditionally by killed virus and due to arrive by February, will be assessed and approved by the FDA and the Department of Medical Sciences. Then, all two million doses will be immediately injected into Thais during February and April. The targeted groups include: elderly people; individuals at risk due to chronic diseases; people in five high risk provinces of Samut Sakhon, Bangkok, Pathum Thani, Nonthaburi, and Samut Prakan; frontline professionals such as medical personnel, and; individuals who have contact with foreigners or travel internationally. The second phase will occur when more vaccines arrive and in the third phase, the vaccine will become widely available and the rate of vaccination will be accelerated.

If the procurement goes as scheduled, vaccination will be scaled up to reach 10 million doses in every month starting from June. This will take place at public hospitals, private hospitals, university hospitals, and other local administrative authorities’ hospitals. The immunisation process will be completed within 2021. It is noteworthy that a committee has been formed to take charge of all steps from storage and distribution to vaccination and side effect monitoring. In case of severe reaction or death, remedies will be provided according to Section 41 of the National Health Security Office. Every step is in accordance with medical, academic, and international principles and guidelines. Dr. Nakorn Premsri, Director of the National Vaccine Institute (NVI), said, “Thailand has communicated with various vaccine developers and manufacturers since April 2020, and aimed to acquire technology transfer to prepare for possible future outbreaks as well. In July 2020, AstraZeneca was looking for viral vector vaccine co-producers. Twenty-five of over 60 interested parties were selected as production hubs based on suitable potential and standard, including Siam Bioscience Co., Ltd. The company required a little more support for the technology transfer. Meanwhile, the vaccine negotiation deal took place at the same time.”

Dr. Nakorn explained: “Other companies only offered purchase options. However, the deal with AstraZeneca means acquiring world-class vaccine technology for the country. Whether the know-how rests with the public or private sectors is irrelevant as long as it is in Thailand. Most importantly, AstraZeneca has expressed full confidence and started the technology transfer last October.”

Dr. Nakorn added that the AstraZeneca deal and COVAX Facility are different: “The booking fee of AstraZeneca is part of the vaccine price. With COVAX, the upfront payment is merely an administrative fee, and the actual vaccine price is only determined when the vaccine’s manufacturer is revealed. The price is specified by the manufacturer. As for the claim that Thailand bought AstraZeneca vaccine at a higher price of $5, this is actually the reference price on the UNICEF website. Some sources do not include research funding which has been subsidised previously. In addition, the price of the raw material varies over time. The increase in demand in late 2020 raised the price of the raw material, resulting in price differences. However, the deal rests on the principle of no profit and no loss.

“Moreover, the news claiming that Thailand declined AstraZeneca vaccines offered by an Indian company is fake. The truth is that Thailand was offered collaboration with another company which is not related to AstraZeneca. Thailand is now also negotiating with the COVAX Facility to reach a deal with reasonable terms and conditions for the country. In addition, more doses can be secured via bilateral negotiation with other vaccine manufacturers so that vaccine supply in Thailand will be adequate for all population. And Thailand shares the opinion of the World Health Organization (WHO) concerning use of the AstraZeneca vaccine in the elderly population that it can be safely and effectively injected in people over 65 years old.”

Dr. Nakorn concluded: “The procurement is transparent and endorsed by various committee. The contract terms are considered by the country’s legal authorities with no concealment. Thai people can rest assured that Thailand has equal capability and can produce vaccines to an international quality standard. We don’t need a variety of vaccines. The more important point is to vaccinate people widely to get enough coverage with a quality vaccination program.”