Grand Seiko presents a Spring Drive masterpiece that captures the ever-changing yet eternal nature of the sky at night.
Thailand
PR News

High up in the mountains of the southern part of Japan’s Shinshu region is Achi, a village that is famous for its spectacular night skies. Thanks to its high elevation, its remoteness and the crisp cleanliness of its air, the stars above Achi seem almost within touching distance and the immensity of the universe is brought into the sharpest focus. With its platinum case and with the glide motion seconds hand that moves silently and continuously across the deep blue, star-speckled dial, this new Grand Seiko masterpiece brings to life both the majesty of the heavens and the ever-changing and yet eternal nature of time itself.

When the Spring Drive manual-winding caliber 9R02 was first presented in 2019 to mark the 20th anniversary of Spring Drive, it won favor among watch enthusiasts worldwide for its delicate yet understated refinement. With its hand-crafted quality and with the glide motion seconds hand that is the signature of Spring Drive, it exemplified Grand Seiko’s uniquely Japanese sensibility.

Today, in celebration of the 140th anniversary of the foundation of the company, Grand Seiko presents a new Spring Drive masterpiece powered by this caliber and made by the elite team of watchmakers at the Micro Artist Studio in Grand Seiko’s manufacturing facility in Shiojiri. The watch will be available as a limited edition of 50 at the Grand Seiko Boutiques in August 2021. 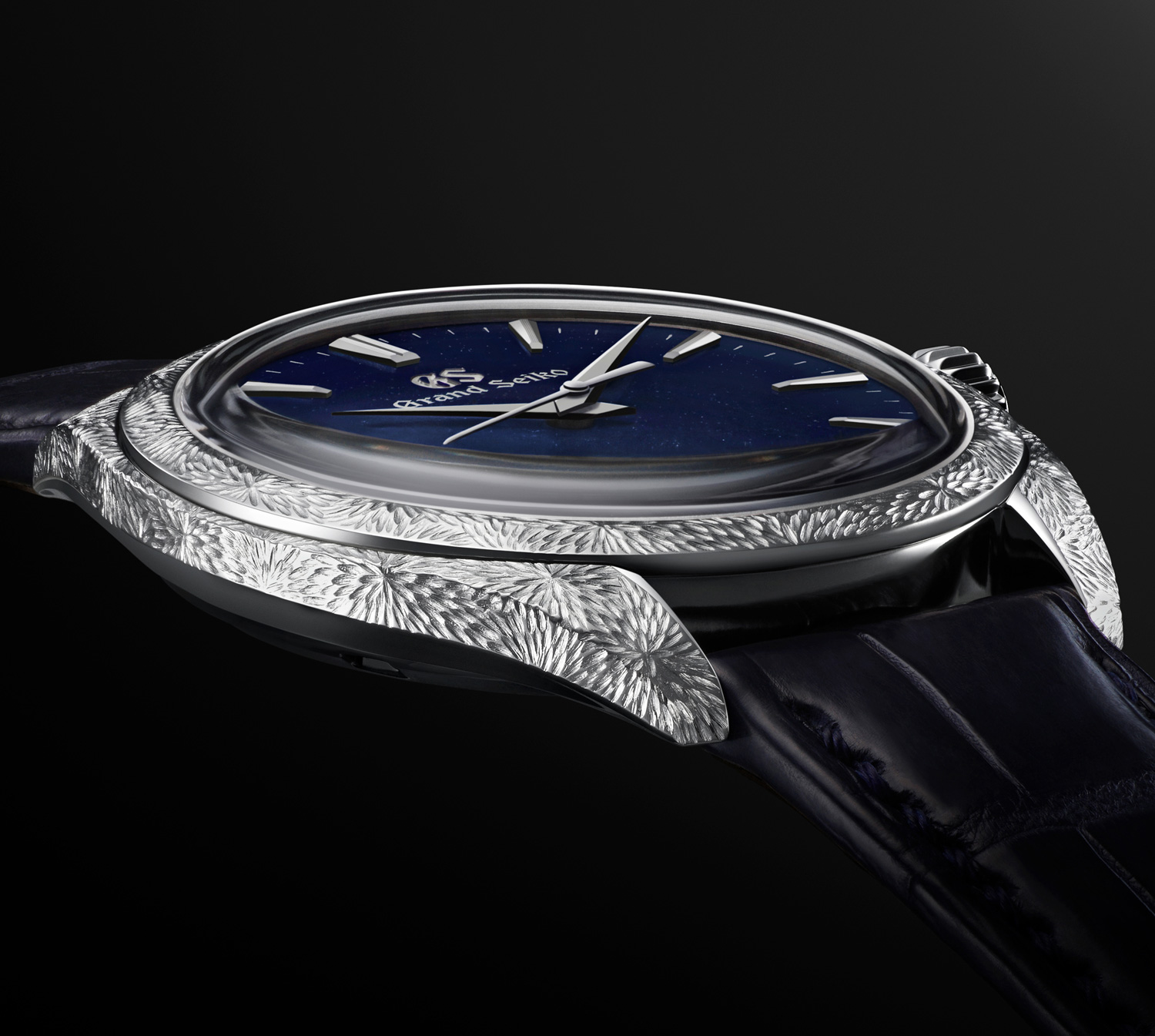 The blue of the dial has a remarkable depth that is accentuated by the quiet and delicate sparkle of what appear to be distant stars. A unique manufacturing and finishing technique combining stamping, plating and painting gives the dial a different aspect at each and every viewing angle, just as does the sky above Achi.

The Platinum 950 case is carefully engraved with a pattern which is replicated in different directions on the Zaratsu polished case, again capturing the exquisite order and ever changing aspect of Achi’s starry skies.

The watch presents a refined and slim profile with a diameter of 38.5mm and depth of 9.8mm. The hour and minute hands and hour markers are made of 14k white gold to ensure that their brilliance endures for decades. The Grand Seiko name, the minute markers and all the other markings are etched into the dial.

Created and assembled in the Micro Artist Studio

Every aspect of the movement is designed without compromise. The power reserve indicator is on the back side of the movement next to the barrel whose shape echoes that of the bellflower that is the symbol of Shiojiri. The rims of the bridges, the holes for the rubies and the screws are all expertly hand polished to a perfect mirror finish and the tempered blue screws stand out in contrast to the hairline finish of the bridges to heighten the perception of the perfection of the engineering. The caliber also incorporates an 18k yellow gold plaque on the lower bridge, which carries the engraved words “Micro Artist” but which can, if the owner so wishes, be replaced with a word of his or her choice.

The movement is assembled and adjusted by the craftsmen and women in the studio including Katsumi Nakata, who has been recognized as a Contemporary Master Craftsman and is now the third member of the Micro Artist studio team to have received the Medal with Yellow Ribbon from the Japanese government.

The outstanding 84 hour power reserve of Caliber 9R02 is realized thanks to the Dual Spring Barrel, in which two mainsprings are set in parallel within a single barrel, and the Torque Return System. When the mainspring has been fully wound and the torque output is at its highest, approximately 30% of the available power is not needed to maintain the precision of the watch and is in effect wasted in a normal movement. The Torque Return System uses this energy to rewind the mainspring, resulting in an increase in the power reserve. In Caliber 9R02, this system is activated for 48 hours after the mainspring has been fully wound.

About the Micro Artist Studio

The Micro Artist Studio is a luxury watch studio that makes the Grand Seiko Masterpiece Collection, a series of unique watches that combine the best in horological technology with hand craft¬smanship of the highest order. The studio was established in 2000 with the purpose of “uncovering, examining, and mastering the technologies and skills passed on by our predecessors for the production of luxury watches”. The team consists of over 10 craftsmen and women, each expert in their respective field. 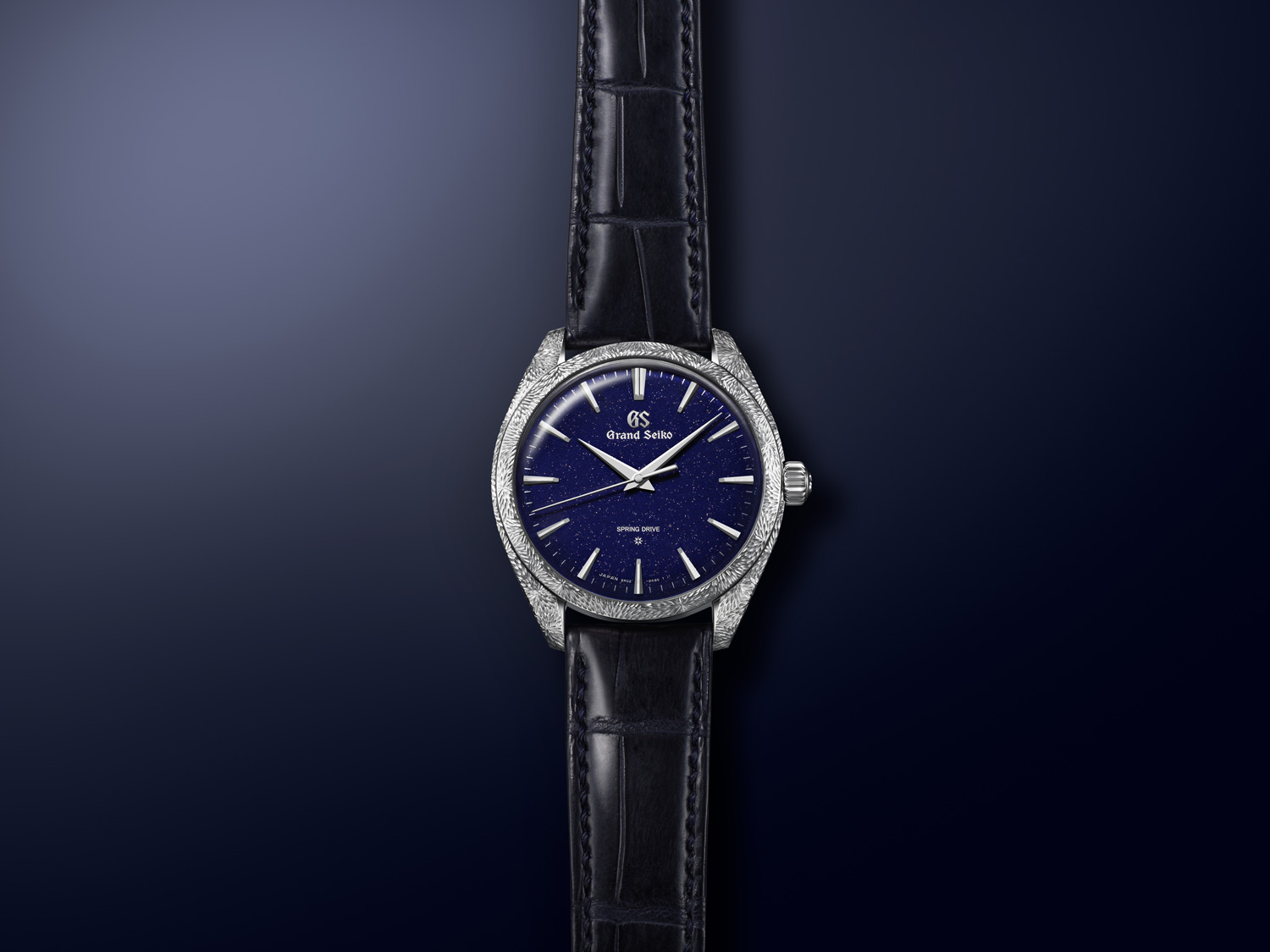 PAPEETE: French President Emmanuel Macron faced pressure to apologise for the devastating impact of decades of nuclear testing as he kicked off his first official trip to French Polynesia.