NtechLab is a world-renowned expert in video analytics solutions powered by artificial intelligence.

The company currently operates in twenty-three countries across the Middle East and North Africa, South and Southeast Asia, and Europe. More than 400,000 cameras globally are connected to software with NtechLab’s face recognition algorithms. More than 50,000 crimes have been solved using NtechLab face recognition technology, and in cities where the system works, burglaries and car thefts have decreased by 85%, while solved-murder rates have climbed to 92%.

“In 2021, NtechLab experienced rapid development at all markets. In Southeast Asia, we grew 40% more than in 2020. In 2022, year-over-year growth has already exceeded 40%,” says Liana Meliksetyan, Chief Commercial Officer at NtechLab. “We are currently looking at Thailand as a potential NtechLab Asia headquarters. The country is a driver of digital transformation in the region.” “As a leading face recognition software company, NtechLab has established a worldwide network of trusted partners who implement our technology. Companies in Thailand show amazing expertise in research and development and digital transformation projects implementation. We are also looking to attract talented, young professionals and scientists from Thailand. We are ready to share our expertise, conduct joint projects, and share expertise with Thai companies and government entities to implement a smart and safe cities concept,” according to Dmitry Tameev, Head of Business Development & Sales (Asia-Pacific) at NtechLab.

Face recognition technology empowers governments and security services to act with greater speed and confidence. It employs high-precision, real-time face recognition mode to video streams. Images are compared with a database of wanted individuals. If there is a match, it notifies law enforcement immediately. The entire process, from the appearance of the person in front of a camera to law enforcement receiving a signal, takes less than a seconds. This enables a fast response to situations as they develop.

The technology can also provide commercial companies—such as retail stores, exhibition halls, and trade centres—with richer audience analytics on visitor numbers, including segmentation based on gender and age, the average length of visit time, and whether attendees are new or regular visitors. Other applications of the technology are access control and attendance management systems.

NtechLab’s face recognition and silhouette tracking algorithms are internationally recognised as leading technologies across industry competitions. In 2022, NtechLab entered the Financial Times 1000 list of Europe’s fastest growing companies. It is the first year NtechLab has made it onto the list, earning a coveted 102nd place due to a 122% compound annual growth rate between 2017 and 2020.

NtechLab’s flagship product is the FindFace platform for multi-object video analytics and biometric identification. Its innovative technology detects faces in live video feeds; cross-referencing likenesses against watch lists and sending notifications to the service user when a match is found. With its advanced face recognition algorithm, user-friendly interface, and capability for rapid deployment, FindFace is ideal for solving national and business security issues.

Ad-ons and additional features are available to clients, such as the new FindFace silhouette recognition feature. This algorithm not only identifies a person’s silhouette, but also tracks the individual’s further movements, including through crowds. 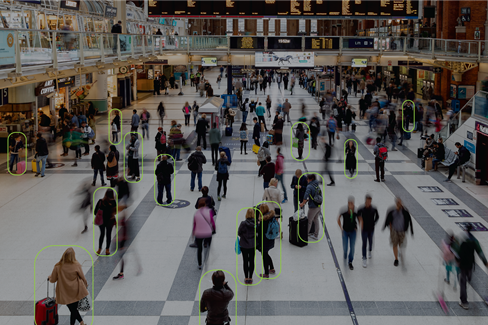 The use of face recognition in Russia has already seen more than 50,000 crimes solved, and an 85 per cent drop in burglaries and car thefts. Various face recognition projects are currently being implemented in thirty regions across Russia. Moscow has been a pioneer in the development of this technology and has been using face recognition since 2017. After installing five hundred cameras across Moscow ahead of the 2018 FIFA World Cup, almost two hundred wanted persons were recognised in real-time and detained.

The Western Railway, one of the busiest railway networks in India, commissioned 470 video cameras featuring NtechLab real-time face recognition technology. The system is used to shape strategy; for instance, by counting passenger traffic at any given time on the network. It is also used to identify criminals and search for missing persons.

In 2020, following a $15 million investment from an international consortium of sovereign wealth funds, including those from the Middle East, the company announced the opening of its Gulf representative office in Abu Dhabi.

NtechLab was chosen as the technology partner of the Russian pavilion at Expo 2020 in Dubai, United Arab Emirates. NtechLab’s system enabled the Russian pavilion to collect analytics on visitor numbers, including segmentation based on gender and age, as well as calculating the average length of visit time and whether attendees are new or regular visitors.

How the industry has changed

“Customers do not need pure innovation. Smart cities and governments globally want to keep their cities safe with innovative technologies, and commercial businesses and clients want to gain competitive benefits from the rich audience analytics our software can provide,” says Liana Meliksetyan.

In the past, companies were developing face recognition and video analytics algorithms in academic conditions based on synthetic data. This was in a vacuum, with the aim of working out whether the technology could work.

Today, the technology has become much more rooted in actual practice, with companies trying to apply algorithms to real-life problems and using this as the basis for developing products; for example, self-checkout counters in stores that provide the option of paying using face recognition.