Instant noodles and swimming are not typically linked in the world of business.

But the sport has given Pipat Paniangvait, creator of Mama instant noodles in Thailand, a vast opportunity to branch out onto the world market.

For Mr Pipat is not just the CEO of Thai President Foods (TF), which makes the internationally marketed noodle brand.

The 77-year old has also been a member of the Federation International de Natation (Fina) for two decades, and has also been honourable treasurer of the group since 2009.

His is the third highest ranking member of the aquatic sports governing body, after the president and secretary. His position has given him the chance to connect with movers and shakers from around the world.

With a house located alongside Padungkasem canal, Mr Pipat first began cultivating his love for swimming as a child. This experience propelled him to win gold meals both in local and regional leagues like the Asean Games, as well as find himself in his current position at Fina.

While working for Fina, Mr Pipat has had the opportunity to forge relationships which gave him a leg up in establishing a Mama noodle factory in Hungary.

"We were able to seal the deal and win the bid to acquire an instant noodle factory in Hungary in a short period of time thanks to help from our Hungarian friend at Fina, who brought me to meet the Hungarian prime minister," Mr Pipat says with a smile. "With his help, our business deal went smoothly."

The company spent 300 million baht to acquire and modify the factory. Operation of Mama's Hungarian factory started in the first half of this year and boasts a capacity of 7 million packages per month.

The factory serves as a production hub for Mama in the European market, replacing exports from Thailand. This will increase Mama's competitiveness due to lower operational costs.

From Hungary, Mama exports to France, Germany, the Netherlands, Finland, Slovenia, Hungary and Austria. The Czech Republic and Slovakia will be added in the third quarter this year.

Sales of Mama from its Hungarian factory are expected to be about 250 million baht this year and will increase to 400 million baht over the next three years.

But it's not just Hungary where Mama wants to make a splash. Ghana and Iran are other countries where Mr Pipat's Fina connection has served up opportunities for growth. Although in Ghana, unfortunately, exchange rate instability caused the company to cancel its expansion plans. 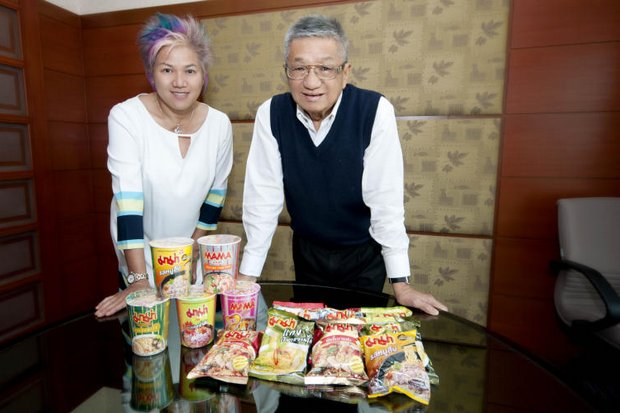 Despite his age, Mr Pipat still travels abroad every year to attend swimming tournaments. He is currently in Rio de Janeiro for the Olympics.

"There is always a cost-free opportunity for me to use my free time after competitions to survey business opportunities for Mama in each country I visit," says Mr Pipat.

He has stepped back from daily operations the past several years, with Suchai Ratanajiacharoen taking over those responsibilities.

Mr Pipat also has seven children to help him expand his Mama empire. He made sure they had varied educational experiences, both in terms of location and field of study, so they could each bring a different perspective to the family business.

"By doing so, my children will have friends from seven societies and knowledge from seven fields, including food science, business development, IT and law. They will be able to support our instant noodle business," says Mr Pipat.

Pojjanee Paniangvait, Mr Pipat's oldest daughter and vice-president at TF, says the education standard for Mr Pipat's kids entails at least one master's degree in the field of their choice and one MBA. But when it comes to his grandchildren, the standard is even higher: at least one PhD and one MBA.

He gives his children room to make decisions, though advice will always be forthcoming, either face-to-face or on the family's group chat on Line.

Mama instant noodles are produced at three factories in Thailand with a capacity of 7 million packages per day. There are other factories in Myanmar, Cambodia, Bangladesh and Hungary.

"Under second-generation management, TF will no longer just sell instant noodles. New food products will gradually be added to our portfolio," he says, adding the latest move is to expand into Japanese ramen.

Meanwhile, Ms Pojjanee says her father is an idol for all of his children.

"My father's dream is to see all of his kids become successful before he leaves this world. He has kept Mama afloat for 44 years. If he knows it can live on forever, he will be very pleased," she says.