A number of food vendors in Phasi Charoen district have replaced styrofoam food containers for recycled ones, to be environmentally friendly and out of concern for people's health. (Photos by Pawat Laopaisarntaksin)

'The number of customers actually increased after I ditched styrofoam containers for recycled ones to pack takeaway food," said Somchai Puengsin, a food vendor in Phasi Charoen district.

The 54-year-old vendor boasted of the increasing number of takeaway orders after joining the campaign. Although the increased cost of the recycled containers is four times higher than styrofoam, he will not increase his prices or change the quality and quantity of the food he cooks for his customers.

Supported by the Thai Health Promotion Foundation, the campaign is aimed at discouraging food vendors in the district from using styrofoam and plastic food containers and urging them to use packaging that is environmentally friendly.

Mr Somchai said the knowledge he has acquired from the programme arranged by the research centre has made him realise the importance of using biodegradable food containers so he decided to take part in the programme.

A 100-unit pack of foam food containers is priced at 45 baht, compared to 200 baht for recycled containers made from sugarcane. He urged the government to support vendors to use recycle food containers by creating a similar campaign across the country in the hopes that it would bring down the cost of material.

"If a large number of vendors joined the campaign we would negotiate with producers of recycle food containers over wholesale purchases," he said.

A delivery service is provided with a wholesale purchase but the products do not come at bargain prices, he added. 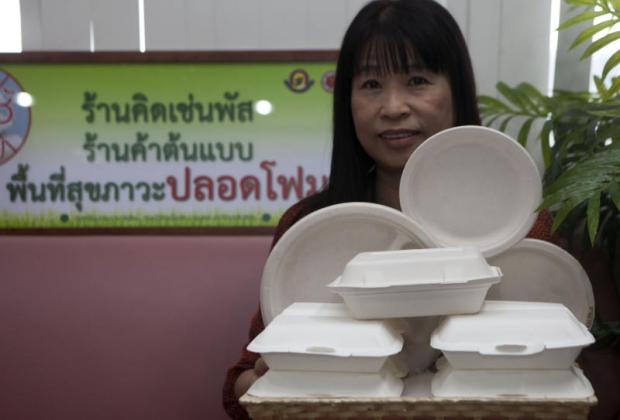 Food containers made from sugarcane are on display.

Mr Somchai admitted that biodegradable food containers have some limitations, saying their physical strength and heat resistance are not as good as plastic containers. However, they have received a very positive response from his customers, reflected in an increasing number of takeaway orders.

"Takeaway orders are pouring into our shop. The number of customers is beyond our expectations after we promoted the idea of using recycled food containers," said Mr Somchai, adding that his shop depends on takeaway orders, due to limited space.

He believes recycled food containers are now popular among modern consumers partly because they have become more concerned about their health and the safety of containers. There is also a growing realisation that people have to carefully manage natural resources.

Assoc Prof Kuntida Chancharoen, director of the Research Centre for Community Development, said the programme, launched in 2012, was part of a "Healthy Spaces and Places" programme in the district.

The research centre serves as a technical resource centre of information and tools to create green and social networks. Its goals are to improve the healthcare system, foster community development opportunities and strengthen communities through training.

The programme's objectives are to add more green spaces to the district which has been adversely affected by development and turn crime-prone areas into healthy and livable locations.

Urban green spaces including gardens and parks help nurture the ecological system and improve the lives of city dwellers. However, many were destroyed and replaced with residential projects, while some fell prey to profit-oriented transportation projects, she noted.

"We must do something that helps restore green spaces in the city," Assoc Prof Kuntida said.

She cited one example of a successful project on Buddha Monthon Sai 1 Road near Klong Bang Khee Kaeng, which now serves as a community health centre.

Surrounded by trees and dotted with green spaces, this recreational spot is where local residents meet and do creative activities at weekends.

"The area was associated with illegal activities. The canal [Klong Bang Khee Kaeng] was polluted with junk and waste. Our network worked together to improve the landscape and the quality of water to make the area livable," Assoc Prof Kuntida said, adding the network has set an ambitious goal of developing the area into a learning centre.

Plans under the "Healthy Spaces and Places" programme include: adding green spaces to the district; setting up separated bike lanes and footpaths away from roads to make pedestrians and bicycle riders safer; improving landscaping in the district which has fallen into decay and managing waste build-up.

Another important plan is finding a market for farmers that produce chemical-free vegetables, she added. The "Say Yes to Recycled Food Containers" campaign is part of the waste management programme.

The campaign's activities include educating people, particularly food vendors in the district about the advantages of compostable food containers and urging them to participate in activities held from time to time to cultivate awareness about health and the environment around them.

The "Swapping a styrofoam container for a recycled one" event was the campaign's highlight. Held at Siam University on July 24, the activity urged food vendors to bring plastic food containers they have in exchange for compostable ones which are made from naturally grown renewable sugarcane.

"Using recycled takeaway foodware is one way vendors and consumers can help us achieve our goal of reducing waste in the district," Assoc Prof Kuntida said, adding a number of vendors took part in the event and more than 9,000 compostable containers were given out.

Plastic containers that were brought for exchange were taken to the Phrasi Charoen district office to be recycled.

Five food shops at the university and about 50 others located nearby have joined the programme and claimed that the new containers have helped boost their income, Assoc Prof Kuntida said.

Vendors who took part were asked to take a vow to stick with the biodegradable packaging for the long term, she said adding a label was given to vendors, indicating that they were signed up members of the programme.

A team of inspectors was sent to monitor vendors from time to time to check on them and learn about any problems they may have, she said adding the network has negotiated with a leading producer of recycled food containers to lower the purchase price.