After teaching at a deaf school in Nakhon Pathom for four years, Piyoros Pootao wanted something to make his students dream bigger. As a computer teacher, his first idea was to train his students in computer programming. This way, he could send them to regional competitions, give them a useful skill and develop the school's reputational edge. But he changed his plans following a conversation with one of his students.

"I want to be a football star who represents the country," Supat "New" Kultas, an 18-year-old student, remembers telling Mr Piyoros. "We all have more potential than being athletes just for our school's sport day."

With New's words in mind, Mr Piyoros approached the school gym teacher to set up a football team. In 2013, the team was formed, comprising 10 students. They named themselves the Dream Team.

Until then, the only events they'd competed in were yearly sports days at school. But New wanted to show people that he and his teammates could grow to be real competitors, even against high-performing, non-deaf players.

"All we want is an opportunity to prove that we can do it," New said.

Sotsuksa Nakhon Pathom School is a boarding school for deaf students in Nakhon Chasri of Nakhon Pathom province. About 300 students from central and western Thailand are enrolled, ranging from kindergarten to Mathayom 6 level.

Besides the support it offers to the hearing impaired, the school is known for its strong sports programme.

Thanakorn "Korn" Srijumpan, an 18-year-old student, came from Suphan Buri province and has attended the school for five years. Korn is a footballer whose dream is to be a professional player in Thailand.

"I loved football ever since I was five years old," Korn said. "I saw it on television at home. Though I didn't understand completely what the rules were, I liked what I saw. I told myself this is what I want to be in the future."

The Sotsuksa Nakhon Pathom School's football team now has 14 players between the ages of 16 and 18. They train daily with their coach, Saharat Laosup. In addition to his coaching duties, Mr Saharat is a house father who supervises the dormitories, giving him a familiarity with the students on the field and off.

The daily training routine is intense. The players get up before the school-wide 5am wake-up call and run around the swimming pool before they go to class. After class, they attend practice from 4.30pm to 7.30pm.

The team had mixed levels of knowledge and experience in football when they first joined. But Mr Saharat said a lack of experience doesn't always determine one's success. The less experienced players can be "easier to train".

"They come in with empty glasses and open minds," he says. "However, those who are >> >> already good at football sometimes get overconfident about their skills and that can sometimes be a problem."

To show his students what it would take to win a competitive game, Mr Saharat took them to watch matches between schools with notably strong football teams, capable of competing at the national level.

"That's when they realised their skills were not strong enough," he explained.

After one year of training, Mr Saharat thought that the team was ready to compete against non-deaf teams.

Prior to that, they had only competed in a yearly sports day event for deaf students, with 21 schools involved.

To prepare, Mr Saharat developed a way to communicate with his team on the field where everyone can hear except for them. Since he's still learning sign language, he had to rely on his own system of hand gestures.

Instead of a whistle, a flag was used to denote different decisions.

"I taught them to watch out for the flag signal which will be used as the whistle," Mr Saharat said. "I also tell them to always focus on the game as well as the hand movement signals that the referee will send out during their game as guidance."

Chaiyapruek "Nueng" Kwankeaw, one of the players, added: "The players from other schools were nice enough to indicate what was going on when we weren't aware of the surroundings, such as when the ref gives us the signal to stop."

Still, Mr Saharat said, the team had grown to the point where they had a strong instinctive awareness of each other and knew how to anticipate each player's next move.

While the team's first regional tournament in 2014 ended in a series of big losses, it gave them a sense of what they would be up against in future games.

"We were a bit cautious when we first played but we then felt more comfortable after the first 15 minutes passed," Nueng said, recalling his first competition two years ago. "We were fearless and we competed with our heart. The result wasn't as important as the experience we got on that day."

Despite having lost, the team became well known and received financial support from Kasikornbank to fuel its dreams. The bank paid for equipment, uniforms, transport and funding for the programme. It also got them an invitation to a 2015 Bangkok tournament.

That same year, they returned to the field and won a regional tournament against six neighbouring provinces.

TRAINED BY THE BEST

The Dream Team gained media attention for their decision to compete against non-deaf players.

Last year, Mr Saharat got a surprise call from Chanathip "Jay" Songkrasin, one of the most popular football stars of the Muangthong United football club, who is based in the nearby Sam Phran area of Nakhon Pathom.

Jay trained the team at school for one day. But the experience left a lasting impression upon the team.

"The most memorable and most impressive lesson was from Jay," said Thanawat "Gift" Kampun, a forward on the team. "I can't believe a superstar like him would come to teach disabled kids like us.

"I want to be just like him in the future and the fact that he was here shows me that I can be anything as long as I work hard for it and put my mind to it."

"Coach Zico showed us something we'd only see on the TV," said Supparak "Wut" Churaksa, the team captain. "It was something I can only dream of such as passing the ball and speed dribbling. It was a real honour to get to learn from a national team coach like Mr Zico."

After meeting their football idols, the team felt a new sense of confidence and encouragement moving forward with their goals.

REACH FOR THE STARS

The team had a big breakthrough when they won gold in the 2016 Paknampho Games for disabled people in February in Nakhon Sawan.

"It was more than just a dream come true for us when we won games for our school," New said.

"Two years of hard work was not at all a waste. I still can feel the moment when we won the games. It was such a wonderful feeling."

Despite the prestigious gold title, Wut told Spectrum that the best moment for him wasn't from the games in Nakhon Sawan. The most memorable experience was competing against many top non-deaf high school football teams in Thailand like Suankularb, Assumption College and Bangkok Christian College last year.

In the 2015 tournament, they made it to the final round but lost to Bangkok Christian College.

"We didn't win that match but we got second place from it. What makes this memory the best one on my list is the fact that we competed against many other strong teams from different schools and we beat them all," Wut explained.

"When we competed with Bangkok Christian College, I knew they were the toughest contenders we had ever encountered.

Korn said: "What impressed me the most was that the coach of the team from Bangkok Christian College told all his players to compete with us with their ears plugged so that we all can be equal. It was very touching to learn that they care about us."

The deaf team still trains daily since they have many games lined up in the coming months.

The oldest players are in Mathayom 5, which means they have one more year in high school before they graduate.

For the Dream Team, what is more important than winning matches is the hope they will get to play on the national team.

Three of their seniors, who have now graduated, have already been accepted at the national level, representing Thailand in the Deaf World Cup and World Deaf Futsal Championship.

"Deafness is not included as part of the disabilities recognised by the committee of the Paralympic Games," explained Mr Saharat.

"However, there are some competitions in the world that recognise them and organise games for them. I'm glad we already have three of our graduated students who made it to world-class competitions."

New told Spectrum that deaf people can be just as strong competitors as non-deaf people. A lack of hearing is the only shortcoming they have -- but the basic athletic ability, including strength, speed and agility, remains the same.

"We are no different from anyone in the world. We have as much potential as everyone else does. All we need is understanding and the opportunity to grow. I hope I can get to be a professional footballer in the future," New said.

"If my dream is too far from reality, I still want to be able to play football and some day become a teacher to teach deaf students to play football which is what I love and am passionate about." 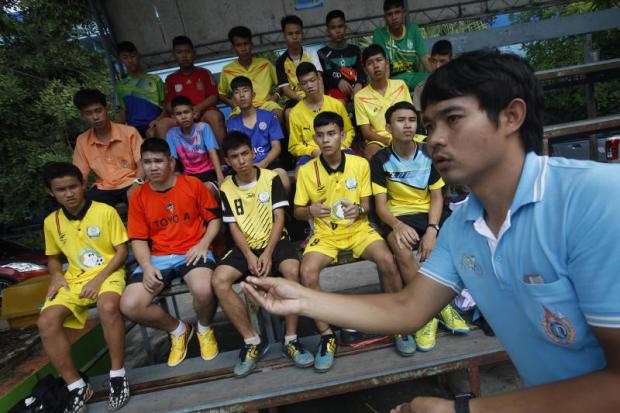 GAME PLAN: Saharat Laosup is the school's football coach and has led the team to many wins so far. 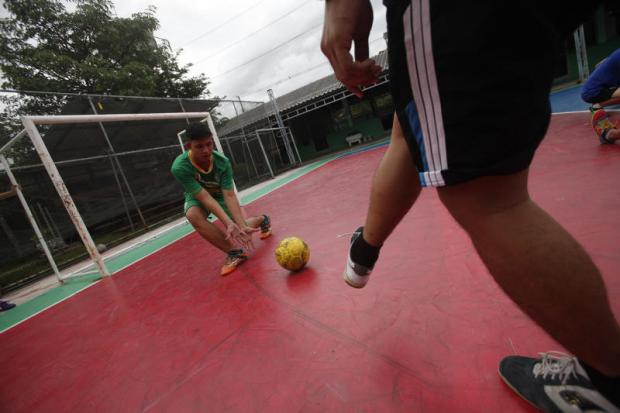 NOT JUST FOR KICKS: The Dream Team trains daily at school with the goal of becoming strong regional competitors and eventually real football professionals. 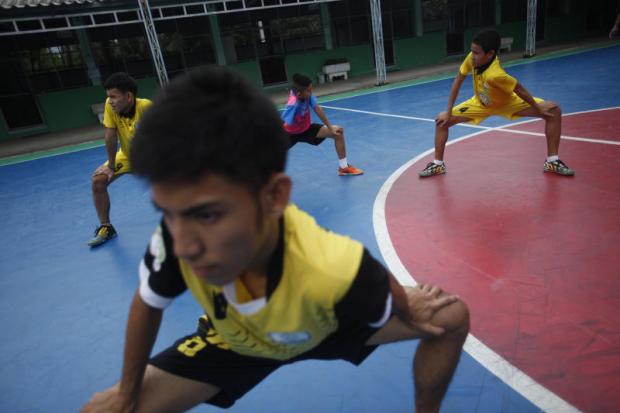 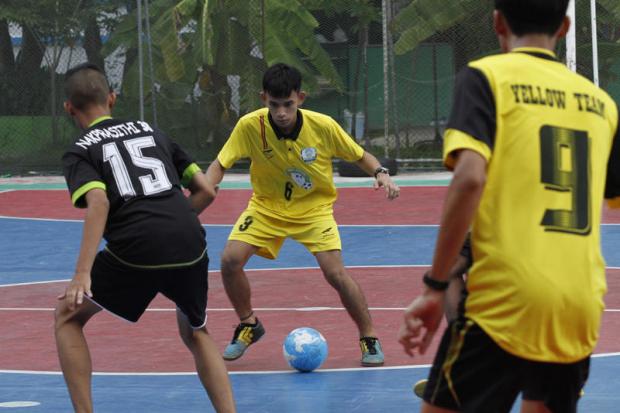 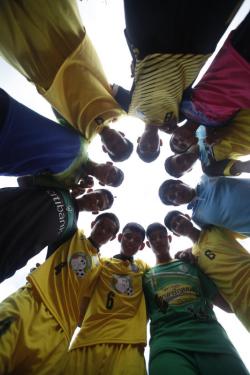 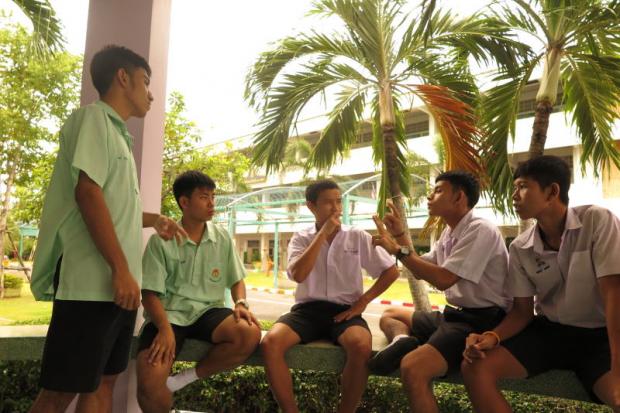 HANDS ON: Coach Saharat Laosup directs his team using a unique system of hand gestures. After extensive training, the team has developed an intuitive awareness of each other's position on the field.