A 4,000-strong force of US-trained soldiers known as Tahan Sua Pran played a big part in one of the least known victories by allied forces in the Vietnam War

A CIA spy who helped orchestrate America's "secret war" in Laos said US President Barack Obama's visit should not dwell on the past as he defended the soldiers he fought beside, including the Thais.

Mr Obama will be in the country from Tuesday to Thursday, the first US president to visit Laos since 1975 when America lost its war in the landlocked nation -- along with a similar defeat in Vietnam.

"Obama's diplomatic visit to Vientiane certainly isn't the time nor the place to find value or fault in anything the USA did in Laos," retired CIA officer James "Mule" Parker said.

Now aged 73, he was a CIA paramilitary case officer in Laos from 1971-73 and authored several books about his experiences in Southeast Asia including Codename Mule, Battle for Skyline Ridge, Last Man Out: A Personal Account of the Vietnam War and his latest, The Vietnam War Its Ownself. All are available at Amazon.com or at the author's own website, muleorations.com.

North Vietnam had constructed the strategic Ho Chi Minh Trail through the jungle in Laos, moving weapons and troops to attack US-backed South Vietnam while securing Hanoi's sanctuary in northeast Laos in the Plain of Jars.

The CIA's mountain-based Hmong were animists with no written language and fought well, but were mostly abandoned by Washington when the US retreated.

"That's ancient history," Mr Parker said. "We have, with this [Obama] visit, an opportunity to signal to the world our friendship and interest in an invigorated way ahead for our two countries.

"That sounds like bullshit, but Laos is a fantastic tourist destination and Americans should be encouraged to visit."

Mr Parker, who also fought in Vietnam in 1965, had experiences that also included secretive fighting by Thailand's forces in Laos, which affected Bangkok's relations with Vientiane and Hanoi for many years.

President Obama's visit may also be able to turn a page on some of the past killings and allow a new perspective on Thailand's role in the war and how Bangkok also can best go forward to improve relations with Vientiane. 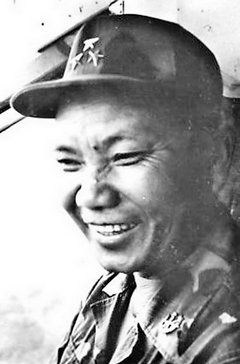 "In 1951, a CIA paramilitary case officer named Bill Lair came to Thailand and was given the job of training some Thai border police as a ready reaction force to counter communist incursions across the Thai borders," Mr Parker said.

"You might remember, Thailand was completely surrounded by communists at the time, and there was some fear that the Chinese would come pouring across the border to the north [in Thailand], like they had in November of 1950 in Korea.

"This force that Bill Lair created -- called PARU [Border Patrol Police Aerial Reinforcement Unit] -- was to act as the Thai vanguard against this kind of thing. To jump into the area, if need be, and rally local Thais in support of efforts to fight off invading communists.

"In December 1960, one of outgoing [US] President Eisenhower's last acts was to sign an authorisation for the CIA to organise and train Hmong around the PDJ [Plain of Jars] to fight the [Lao] communists that had taken up residence in the area after [1960 Lao coup leader] Kong Le's unsuccessful effort to capture Vientiane.

"Bill Lair met with Vang Pao and came to an agreement on this military blocking action, that included assignment of CIA case officers to Pa Dong [Laos] to support and help organise the Hmong hill tribe, and the assignment of PARU forces to train them in guerrilla tactics and marksmanship."

After 1968, North Vietnamese troops displayed their increasing strength "inside northeast Laos, and they constituted more of a force than Gen Vang Pao's ragtag army of hill tribes could handle", he said.

"So the Thais pitched in, first with regular army troops, who really got their nose bloodied out at Ban Na [Laos] fighting the NVA [North Vietnamese Army] 165th combat regiment of the 312th division in the 1970-71 dry season.

"I joined the CIA as a contract Special Operations Group paramilitary case officer in August 1970, and in November 1971 was assigned to the Lao programme, initially working as a desk officer in Udon Thani in northern Thailand.

"I transferred up to Long Tieng [Laos] in early 1972 where I worked as a paramilitary case officer with the Hmong guerrillas. My call sign was Mule.

"Through an agreement worked out primarily between the US military, the Thai military and the CIA, a group that was called the Tahan Sua Pran or Tiger Soldiers were recruited off the streets of Bangkok -- but really throughout Thailand -- and trained by US Special Forces, mostly in the western Thai province of Kanchanaburi, and sent north.

"But they were the Thai King's own. He told them to put a small piece of gold on the back side of the Buddhas they wore around their necks, to indicate their personal, private bond to him. And he told them in their difficult work ahead to use the words to the American song, The Impossible Dream, as their guide.

"The Thai office that controlled this activity was called 333."

The units were to be 550 men in size -- 500 soldiers recruited off Thailand's city streets and rice paddies, and 50 officers and non-commissioned officers who were taking special assignments out of their Royal Thai Army careers, he said.

Thai forces initially scored successes against the North Vietnamese but eventually suffered in and around the Plain of Jars.

"The NVA campaign 'Z' attacked by the tens of thousands on Dec 18, 1971, and in two days all Thai irregular positions were overrun. Many good soldiers were lost, including almost the entire [Thai] BC 609, who at the end were calling in artillery on their own position," Mr Parker said.

Heavy fighting continued in the Plain of Jars.

The battle went on for 100 days before the North Vietnamese retreated, beaten badly by Vang Pao's ragtag army, US air power and the Tahan Sua Pran. It was one of the great and least known victories of allied forces in the Vietnam War.

"So here's my point -- if you mention these brave men, you do not describe them as 'mercenaries' or 'CIA-financed Thai police commandos' or 'CIA trained'. They were Tahan Sua Pran, the King's own," Mr Parker said.

"From my two years there, I saw no tragedies against Laos. I saw raw, undisguised communist aggression that was bravely blunted by local Lao mountain men.

"In my time, Laos was a battlefield of Asians fighting Asians. If US air [bombing] is to be mentioned, it should come after acknowledgement that North Vietnam invaded Laos, never out of context.

"To classify our [US] participation as tragedies just isn't right or fair."

After Laos, Mr Parker handled CIA agents and military reports in South Vietnam in 1973-75 before returning to the CIA's headquarters in Langley, Virginia, and then doing traditional CIA Directorate of Operations work as a spy recruiter and handler around the world until the end of the Cold War and his retirement in 1992.

"I returned to work as a CIA annuitant after 9/11 and worked through 2011 both at headquarters and overseas, including several deployments to Afghanistan. Altogether I worked 32 years undercover, for the most part overseas," Mr Parker said.

During his career, Mr Parker received the Intelligence Medal of Merit, a Certificate of Distinction and two Certificates of Exceptional Service.

As for the efforts of the Tahan Sua Pran, Mr Parker said "they went in [Laos] knowing that it was a secret endeavour, and they still hold to that. It's part of the unit's mystique."

He said back in the day the Tahan Sua Pran's involvement was top-secret.

"It took me two years to get The Vietnam War Its Ownself and the Battle for Skyline Ridge cleared through the CIA, because I mentioned their significant involvement in fighting the North Vietnamese at Ban Na, the Plain of Jars and Skyline Ridge," he said.

"It is only recently that their gallant service has become known."