Photojournalist in the eye of the storm no more

Nick Nostitz has long been controversial for chronicling political violence on Bangkok's streets, but after 23 years he's heading back to Germany

CAMERA, ACTION: Nick Nostitz in front of soldiers blocking the entry to the red shirt protest camp which the military dispersed after the coup was announced on May 22, 2014.

The horrible traffic jams, the disgusting air and the "sh*tty" place at Khao San Road were the reasons that German photojournalist Nick Nostitz hated Bangkok when he first arrived in 1989. Arriving as a backpacker carrying a surfboard, the 21-year-old wrote in his diary that "I will never come back to this awful place".

But it was at a guesthouse on Khao San Road in 1994 where he met his future wife. Now after 23 years, the controversial journalist -- who has won both recognition and condemnation for his close-up chronicling of Thai street politics -- is ready to leave the country for good.

"It's a very strange feeling for me now. In a way I feel like I'm going into exile," said Nostitz, now 48. "At least for my wife and son it is quite true -- they have to leave Thailand because of my work."

Nostitz is a minor German aristocrat whose family's roots can be traced back 800 years to Silesia. After graduating from high school in Munich, he worked the night shift for two months at a Siemens factory before leaving the country to backpack at the age of 20.

It was in 1993 when Nostitz finally settled in Thailand and started taking photos of nightlife in the streets of Patpong, Nana and Soi Cowboy. He also took assignments for newspapers and magazines. His first book Patpong: Bangkok's Twilight Zone was published in 2000.

While Nostitz photographed the 2003 drug war killings, his deep interest in Thai politics began late in 2005 when Sondhi Limthongkul screened his talk show in Lumpini Park via his ASTV satellite TV channel, which became a platform for opposition to the Thaksin Shinawatra government.

"My real interest began when Thai politics moved to the streets, as I have always been fascinated by the streets all along my career as a photographer," Nostitz said.

One of Nostitz's most influential sparks was Thongchai Winichakul's 2006 letter to The Nation newspaper titled "Same Old Royalism Hatches Again". The letter, which The Nation refused to publish, was a criticism of Pramuan Rujanaseri's book Royal Powers, which Nostitz says was one of the ideological influences of the early yellow shirt People's Alliance for Democracy movement.

"With that, I was able to contextualise what was going on at the time in Thailand," he said.

Nostitz's articles became widely known when he started writing for the academic blog New Mandala, which were also translated and published into Thai by Prachatai. The writings gave a different angle on what was reported in the media at the time, which Nostitz says was often very biased towards the yellow shirts.

"A lot of people didn't like what I wrote because I portrayed red shirts as humans with political demands," he said. "I said, 'Hang on, these people have a right to be listened to as well.'"

His first article was published shortly after the red shirt attack against PAD supporters in Udon Thani province in 2008.

"I walked into the PAD camp in front of Government House a few days before it was occupied, and I saw many PAD protesters with iron bars, wooden clubs, some of them with nails in them," said Nostitz. "That's not what I considered peaceful. That's arms."

His articles were heavily criticised, with many accusing him of whitewashing the red shirts. He denies the claim, saying he was the first photographer to capture an image of a red shirt protester with a shotgun, which was published in his 2009 book Red vs Yellow: Thailand's Crisis of Identity.

"They always portray me as a red shirt journalist, but I believe journalists are allowed to have a position, and my position is very clear. I am pro-democracy. Part of being pro-democracy is accepting the outcome of elections," Nostitz said. "Does that make me a red shirt? I don't know. That's my position. If anyone has a problem with that position, f**k 'em."

His reporting on the political crisis lost him many former friends, some who still refuse to talk to him until today. But he also gained a lot of new ones, including BBC correspondent Jonathan Head who he has known for eight years.

Head praised Nostitz for his dedication to recording Thai issues from a close-up, "street" perspective.

"Nostitz has been a superlative chronicler of recent Thai conflicts, in both his gritty photographs and his written accounts," he said. "I know not everyone will agree with this, but I believe his departure from Thailand is a loss, not just to the media community but to our understanding of the changing dynamics of Thai society."

For Nostitz, 2009 was a watershed in how Western journalists looked at the red shirt movement. "When the crackdown suddenly took place, everyone was surprised that the reds weren't just going away but were really fighting," he said. "Afterwards, quite a few [journalists] apologised for their criticism."

In 2012, Nostitz testified as a witness in the death of Channarong Polsrila, who was shot during the 2010 crackdown on the red shirt protesters.

During the protests, Nostitz found himself the target of hate speech on TV and rally stages. The attacks became personal and he was assaulted by PDRC guards. In May 2014, several guards of the protest monk leader Phra Buddha Isara attempted to "abduct" him at the Constitutional Court.

By then, Nostitz was already having problems with money, and that was not just compounded but made disastrous with hate campaigns against him. This prompted him to ask for donations in December 2014.

Nostitz, his wife and their 11-year-old adopted son will leave for Munich tomorrow, where he plans to open a small Thai restaurant.

While Nostitz admits that he feels more at home in Thailand, an incident on Thursday reminded him why he had to leave the country.

Nostitz and his wife went to the Land Transport Department to sort out the registration and insurance for his motorcycle when they saw a group of three men and two women. One of the men wore a Bangkok Shutdown T-shirt.

"He looked at me and pointed a finger at my face with hatred in his face," he said. "It showed me that I'm still very much in their minds." 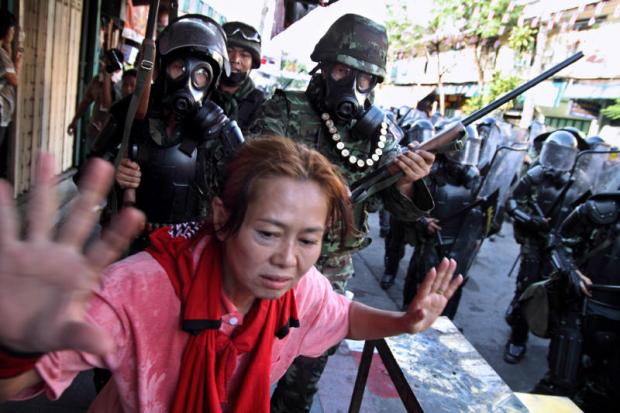 putting up a fight: Soldiers and a protester at Dinso Road on April 10, 2010. 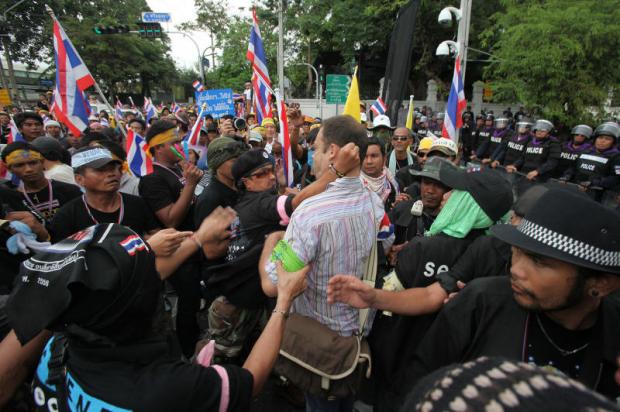 SINGLED OUT: Nick Nostitz is attacked after being publicly called a 'red shirt'. 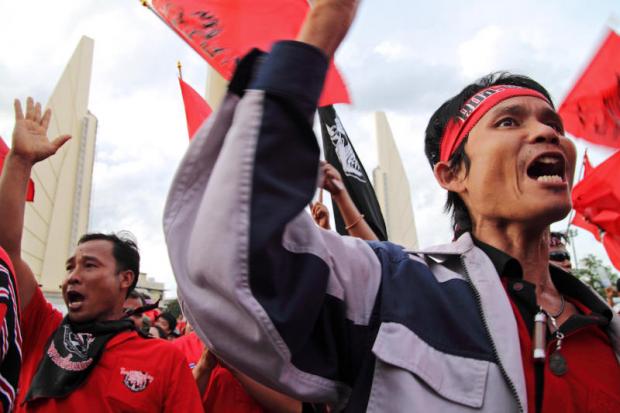