The hostage crisis solved in the name of the King

Close call: On Dec 28, 1972, four members of the pro-Palestine Black September group seized six hostages at the Israeli Embassy in Bangkok. On Dec 29, the hostages were released and the captors were sent on a bus to Don Mueang airport.

In 1972, armed Palestinian "Black September" guerrillas seized the Israeli Embassy in Bangkok, threatened to execute the six Israelis inside and blow up the building. But just as suddenly they surrendered, saying "We love your king" when told that King Bhumibol Adulyadej was appointing his son as sole heir to the throne that very day.

Today, while Thailand mourns King Bhumibol's death on Oct 13, his son Crown Prince Maha Vajiralongkorn is preparing to fulfil his father's decision and become the next monarch. But on Dec 28, 1972, the royal appointment ceremony of then-Prince Vajiralongkorn to be crown prince and heir, was almost marred by bloodshed across town.

Four Palestinian guerrillas wearing jackets in the sweltering heat had arrived in a taxi at the Israeli Embassy on Soi Langsuan near the British Embassy just before lunch. They climbed "over the wall, using the embassy insignia [placard] as a stepladder", the embassy's messenger Anek Bariman said hours later.

The gunmen unveiled assault rifles, threatened to kill people at the gate, and then forced their way into the building by smashing the front door's glass and unlocking it. Inside the embassy, they seized six hostages: Israel's ambassador to Cambodia Simon Avimor, first secretary Nitzan Hadas, his wife Ruth, administration attache Pincus Lavie, Lavie's assistant Danie Beri and Mr Beri's wife.

"The Zionist occupation of Palestine is a criminal and inhuman action with the aim of annihilating our people," the four gunmen said in a typed statement which they threw out of an upstairs window in the early afternoon. They identified themselves as members of the Palestinian Organisation Black September Ali Taha Group.

"We consider that every Israeli Embassy is Palestinian land," the statement said. 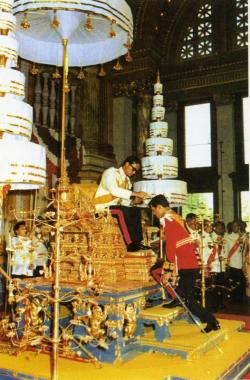 Next in line: On Dec 28, 1972, His Majesty the King Bhumibol Adulyadej held an inauguration ceremony to bestow the title of His Royal Highness Crown Prince Maha Vajiralongkorn at Ananta Samakhom Throne Hall, Dusit Palace. This was the same day that the Israeli Embassy hostage crisis took place. Photos: BKK Post Archive.

They included a list of 36 Palestinian prisoners' names and said they must be freed from Israel's jails and sent to Egypt or the gunmen would kill the six hostages.

"If Israel rejects our demands, we will be free then to treat this staff in the same manner of murder it treats our people," the statement warned, setting a deadline for 8am the next morning.

Steel-helmeted army paratroopers and police sharpshooters took up positions alongside the embassy and set up headquarters across the street in the Mater Dei Convent School.

Inside the school, Israel's ambassador to Thailand Rehavam Amir and Egyptian ambassador Moustafa El-Assawy -- who had been preparing to attend the royal investiture -- discussed possible strategies with Thai officials who were scrutinising the embassy's floor plan.

"All we can do is pray," the Israeli ambassador's wife told journalists.

MEANWHILE, AT THE PALACE

While worried about the dangerous confrontation, the king proceeded to the Ananta Samakhom Throne Hall, where his wife Queen Sirikit, two of their daughters Princess Sirindhorn and Princess Chulabhorn and Prince Vajiralongkorn had gathered to begin the investiture.

Thailand's Chief Brahmin Phra Rajkhru Wamathepmuni gave Vajiralongkorn sacred dried leaves which the prince used to brush each side of his body three times. The Brahmin then poured holy water onto the prince's hands. An official from the Prime Minister's Office read the king's royal command appointing Vajiralongkorn as crown prince.

A floor-to-ceiling golden curtain slowly parted while the King's Anthem played, revealing the king seated on a raised golden throne.

At exactly 12.23pm -- an auspicious moment decided by the royal astrologer -- the king poured lustral water onto the head of the prince who knelt in front of his father. The King's Anthem sounded again and a 21-gun salute began, while Buddhist monks in thousands of temples across Thailand started chanting prayers and ringing temple bells. TVs broadcast the events while a large crowd gathered in front of the Throne Hall.

The king then ceremoniously gave Vajiralongkorn a name plate made of gold which displayed the crown prince's name and his new title as Mongkut Rajakumara. The king also presented him with the royal seal of his new position, plus a gold sword and other emblems and items.

That afternoon, they arrived at the Temple of the Emerald Buddha where a ceremony was performed by the king, queen and crown prince displaying respect to the Triple Gem. Phra Rajkhru blessed some water and dipped a ceremonial arrow and sword into the clear fluid.

Crown Prince Vajiralongkorn then swore an oath of allegiance, and sipped the blessed water given to him by the chief Brahmin.

At the Israeli Embassy, meanwhile, deputy foreign minister Chatichai Choonhavan told the guerrillas, "Today is a holiday. Please release all six hostages and then we will guarantee safe passage for you, wherever you want to go. 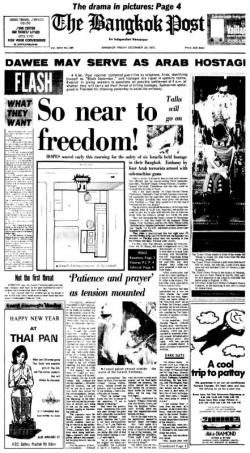 Breaking news: The 'Bangkok Post' scored an exclusive interview with the hostage takers in the middle of the crisis.

"The Thai people are your friends…and we guarantee you safe conduct," Chatichai said.

Thailand's Supreme Command chief of staff, Air Chief Marshal Dawee Chullasapya, told the guerrillas that King Bhumibol held the royal investiture that same day to confirm his son as heir to the throne, and the king was very concerned about the hostage crisis.

"I said I believed Israel would not agree to their demand for the release of 36 prisoners," Dawee told reporters at the time. "They were sorry. They said they did not care for Israel, but they did care for Thailand and its king. They did not want to create a misunderstanding between the Arabs and Thailand."

The gunmen invited Dawee to dinner in the Israeli Embassy to work out a deal.

"I brought in curried rice and chicken," Dawee said. "I had [to eat] a mouthful before they touched it."

Dawee said, "I told them it was hard to negotiate because it was a sacred day [in Thailand]."

"I negotiated with them all night and suggested they should be our guests on a flight to Cairo. Someone asked, 'Why Cairo?' and I said because that [Egypt] is the most important country in the Arab world.

"I was in Munich in 1972 when the [Olympics] massacre there occurred, and I learned the lesson from that," Dawee said.

"The king directed us not to do anything of a violent nature unless it was completely necessary."

Dawee invited the Egyptian ambassador to join the all-night meeting inside the besieged embassy.

That night, the Egyptian envoy played a decisive role by stressing to the guerrillas that it would be "deplorable" if the crisis tarnished the auspiciousness of the royal investiture.

Two hours before dawn on Dec 29, the Bangkok Post scored an exclusive interview with the gunmen.

"This is the Palestine Embassy," a guerrilla said when two Bangkok Post reporters -- Peter Finucane and John McBeth -- telephoned the Israeli Embassy. "This is Black September."

Black September formed in 1971 after Jordanian King Hussein's army, backed by tanks, artillery and rockets, unleashed a devastating assault on Palestinian guerrillas in the capital Amman -- which was 70% Palestinian -- and towns across Jordan in September 1970 after weeks of sporadic clashes. Thousands of Palestinians were killed, wounded or expelled.

Earlier, thousands of Palestinians had fled to Jordan for safety after the 1967 war with Israel, when Jordan lost the West Bank of the Jordan River.

Several months before seizing the Israeli Embassy in Bangkok, Black September staged other international attacks including against Israel's Olympic team at the 1972 Summer Games in Munich, killing 11 Israelis and a German policeman.

Before disbanding in 1974, they also bombed embassies, hijacked passenger planes and seized hostages in several countries.

"The Israeli government says we are bad people and that we want to kill Israeli people. What we want is to have Jews and Muslims living in peace," the gunman told the two journalists. "The Israeli government, with British and American aid, have taken away our land from our people. We have many Palestinian brothers and sisters. We want them to be taken out of the prisons to any Arab land. We would prefer them to go to Cairo."

The unidentified Palestinian's calm English-language replies to the two Bangkok Post journalists sounded "tinged with sincerity and a stunning measure of complacency", they reported.

"We have told the [Thai] government and the generals from the army that we are sorry," the gunman said. "We are most sorry we did not know this day. We love your king. He is very good and beautiful.

"We hope the Thai people will know our problem. This embassy is our land," he said after earlier hanging a Palestinian flag in the embassy's window so it could be seen outside.

He then invited Thais to train as guerrillas in the Middle East.

"I hope some of the Thai people will become Palestinian commandos with us," he said during the telephone interview.

Less than 24 hours after the assault began, an agreement was reached so that Dawee, joined by Chatichai and seven other Thai security officials -- plus the Egyptian ambassador -- would be exchanged for the six hostages. In response, the Palestinians agreed to release all six Israelis in Bangkok.

An air force bus arrived at the embassy, escorted by police motorcycles and squad cars.

The six hostages came out, tied together with ropes, and climbed into the bus.

Their release took place about 6am on Dec 29 in Bangkok's Don Mueang International Airport.

The relieved Israelis hugged each other upon gaining their freedom.

"I didn't know it was so good to be alive," shouted Ruth Hadas in Hebrew after she and her husband realised it was over.

"If it wasn't for the king, I don't think any of us would be here," she said in English to a reporter at the airport.

Dawee, Chatichai, the seven other Thais, the Egyptian ambassador and the four guerrillas then flew away on a Thai International DC8 plane to the Egyptian capital as the sun rose above Bangkok.

"We were not hostages of the guerrillas," Dawee said at the time.

"They were our guests. The atmosphere was very friendly and it was very kind of them [to peacefully compromise]. What they did at the Israeli Embassy was their own business. But it happened in our country and on a sacred day when the king was installing the crown prince.

"But the guerrillas did not know that [until after seizing the Israelis]," Dawee said.

When they landed in Cairo, a van took the unidentified guerrillas away while the nine Thais were courteously met by Egyptian foreign ministry officials who escorted them to the departure lounge. The nine Thais then flew back to Bangkok.

In Tel Aviv, Israeli prime minister Golda Meir said in a radio interview after the crisis ended: "I want to take this opportunity to express my gratitude and appreciation in the name of the government and all the people of Israel for the faithful and vigorous action of the Thai government, ministers and others who took part in the operation and negotiations.

"We express our deepest admiration and gratitude to the government of Thailand on the fortitude, sangfroid and discretion displayed by them." 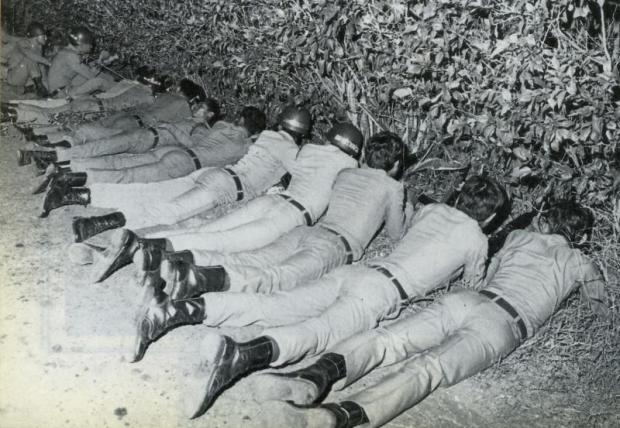 Lined up: The Black September group threatened to kill the embassy hostages unless 36 Arab and Palestinian prisoners in Israel were freed. 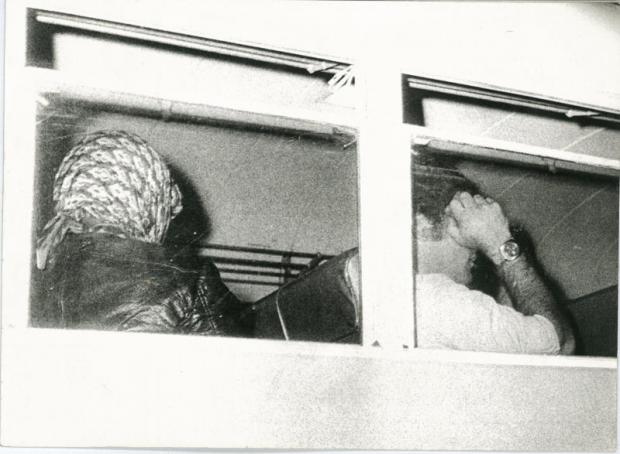 Sent back home: Two of the guerrillas headed to Don Mueang airport on Dec 29, a day after the seizure of hostages and royal investiture.