What happened to my dead brother?
Thailand
Special Report

What happened to my dead brother?

James Hughes was found dead in a Hua Hin hotel room on Sept 6 after having disappeared on Aug 5. He was 58 and his cause of death was given as "circulatory failure". But when brother David Hughes received an autopsy report a month later, he was convinced that something major was being covered up.

The results showed that the American lecturer, who taught at Webster University Thailand (WUT), sustained several bruises from head to toe and an internal bruise in the occipital region of his head.

"He was beaten badly and I am sure he died from these injuries, definitely," David Hughes told Spectrum in a telephone interview from New York.

The hotel where James Hughes died was located in a bar district near Hua Hin police station and only a block and a half away from the savage attack on a British family during the Songkran holiday in April. That assault, captured by overhead security cameras and posted on social media, sparked outrage over its brutality.

"This is a faulty police, embassy and Thai government issue and cover-up," said David Hughes. "It's like with the British couple that was beaten in Hua Hin. They [Thai authorities] didn't want that to get out there, I'm sure. It kills tourism."

Two months after James Hughes' death, police closed the case, saying there was no evidence pointing to murder. But friends and relatives are urging authorities to investigate what they say is a likely murder.

James Hughes was scheduled to fly out of Hua Hin on Aug 5 with Rachael Rudolph, who teaches international studies at WUT.

A day before the flight, James Hughes messaged Ms Rudolph to let her know he wasn't going to make it, saying he wasn't feeling well. James Hughes' landlord went to Ms Rudolph's house to ask her to go and see him.

"James said he was sorry that he couldn't go on his trip and that he was not feeling well," said Ms Rudolph, who would be the last friend to see him alive.

The next morning, the landlord discovered he had left and the door was unlocked. His toiletries and shoes were still there, so he had packed lightly. He never returned.

After that, he stopped contacting everyone and turned off his phone. Several people emailed him or sent him texts and Facebook messages, but received no reply. His brother sent four unanswered emails. 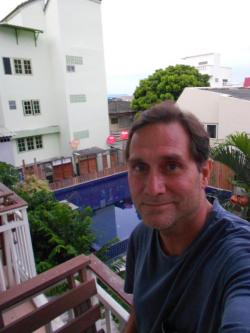 Popular: James Hughes was described by students and colleagues as a well-liked member of Webster University's teaching staff. photo: courtesy of david hughes

"We knew he wasn't in good shape and told people he had screwed up, but it isn't clear what about," said Norris Smith, a former Webster University lecturer. "He was likely dreading returning to teach at WUT, but something else must have happened."

Several faculty members and students described James Hughes as arguably the most well-liked person at WUT, where he had taught mostly media writing for five years.

Mr Smith described Mr Hughes as an unselfish man who cared about all his students and went out of his way to be helpful. When a student was arrested for marijuana possession and had to go to jail, James Hughes spent his own time and money to visit the student and coordinated his release to some degree.

When the lecturer missed his first class, the university's senior administrators were contacted along with hospitals, police, immigration and the US embassy.

One American put out a notice he was missing along with a photo, spreading the news on Facebook and other websites.

After a missing person order was validated, WUT received confirmation that he was alive, said interim rector Keith Welsh. He said the university received photos "open to the police" but declined to disclose the content of the photos.

A faculty member who had seen the photos told Spectrum that they contained CCTV images of James Hughes going to a Kasikornbank ATM.

On Sept 6, police officer Sanpawut Lammana received a phone call from staff at Puang Pen Villa Hotel who suspected a foreigner had died in one of its rooms.

A police report seen by Spectrum said James Hughes had checked in on Sept 5 and was staying alone. On the morning of the next day, a hotel cleaner had knocked on his door but there was no reply, and the door was locked from the inside.

Police found Mr Hughes' body lying at the end of the bed, but found no signs of fighting in the room. The body was transferred to the Police General Hospital's Institute of Forensic Medicine for an autopsy on Sept 7. Mr Hughes' death was said to be a result of "failed respiration and blood circulation", according to his death certificate seen by Spectrum.

It wasn't until a month later that David Hughes received the autopsy report, which showed several contusion, tear and avulsion wounds as well as an internal bruise in the occipital region of his head.

The autopsy ruled out suicide, drug use and poison, although alcohol was detected in his body.

Police said an initial background check and investigation showed that Mr Hughes was a heavy drinker, and they suspected the bruises were the result of an accident.

"He might have been drunk and fallen down," said Pol Lt Sanpawut. "We did not extend the investigation further because there is no reason to suspect this is a homicide."

But David Hughes denied his brother was an alcoholic, saying the police are using the fact that he was drinking as a "cover-up".

"He may have been drinking, but it's clear my brother was beaten up to the point of dying a day or so later," he said.

On the day of James Hughes' death, Mr Welsh sent out an email of news of his passing. "We have no details about James' passing and, to respect his friends and family, it is honourable not to speculate," said the email.

Three days after James Hughes' death, Donald Johnson was called into the WUT rector's office after his wife obtained morgue photographs of James Hughes through a friend who works at a hospital. The photos were shown to Mr Johnson, who teaches psychology, and a few other faculty members.

Mr Johnson said he was pressured to sign a letter that warned of serious consequences if photos or information regarding the death of James Hughes were disseminated. The letter asked him to "cease and desist from showing, displaying or otherwise making public or available to other people photographs of the deceased James Hughes". He was also prohibited from "discussing, describing or in any other way representing the contents of the photos to others", according to the letter seen by Spectrum.

He was also asked to list the names of the people who had seen the photos and was threatened that violating the agreement would lead to his actions being reported to police.

"One of the administrators accused me of immoral behaviour. Even if I had shared the photos, which I never did because I never possessed them, looking at the morgue photos was just an honest attempt to find out what had happened to our friend," said Mr Johnson, who had known James Hughes for nine years.

Several of James Hughes' friends and relatives believe his death to be a murder. In a letter to the Thai embassy in New York, close friend Jerome Weinberger said friends and family were also "suspicious of WUT's crude 'cease and desist' order".

Mr Welsh, however, accused Mr Johnson of "obtaining the pictures illegally" and said he had asked him to sign the agreement to respect James Hughes' privacy.

"WUT went out of its way to assist David in handling James' affairs. Professor Hughes was a beloved professor here and we still grieve for him. We work with all appropriate authorities to help him out, and we weren't interested in covering up anything," Mr Welsh said.

The morgue photos seen by Spectrum appear to show evidence of beating, which was not mentioned in the police report. The most startling feature is his eyes, both of which are dark black. There are also bruises on his forehead and a deep bruise and cut across his nose.

A hospital staff member who took the photos said there were more bruises on his shoulder and back, and both his lower legs had scrapes on them, as if he had been dragged.

The cremation of James Hughes at Wat Hua Hin lasted less than 15 minutes.

"Several students and faculty and community members showed up, but nobody spoke, except to say you could take a paper flower and place it on the coffin," said Mr Johnson.

David Hughes said one of the reasons he went through with the cremation and service through Webster is that he was told and believed that the police had done their investigation and had ruled out foul play.

Other than a memorial on the WUT website which gives no mention of the cause, James Hughes' death is nowhere to be found online. Unsubstantiated rumours suggest suicide, although David Hughes dismissed that as unlikely, saying his brother feared death and violence.

The two brothers were very close but grew apart after the death of their mother due to cancer. They had not talked since 2008 until about 10 months ago.

"I called him about 10 months ago. I heard his voice and he said hello and I just listened to him and didn't say anything," said David Hughes. "I have had so much sadness over that."

Mr Weinberger, James Hughes' close friend in New York, has been in contact with the US embassy, but both he and David Hughes feel that the embassy has not done enough.

When David Hughes complained of his brother's badly bruised body, the embassy sent him a list of lawyers in Thailand.

"The State Department has no higher priority than the protection of US citizens overseas. In the event of a death of a US citizen abroad, the embassy or consulate provides all possible assistance. We refer you to the Thai authorities for information on their investigation into the circumstances of Mr Hughes' death," US embassy spokeswoman Melissa Sweeney told Spectrum.

David Hughes is still grieving the loss of his brother, and he is looking at emails James sent to friends and his ex-wife for clues. Had he known his brother was badly bruised, he would have postponed the cremation and maybe asked for his body to be held for further investigation.

"I feel very violated, very f**ked over, by the higher-ups, and all for saving the reputation of a country's government and for tourism's sake ... and maybe even to save a few personal reputations here and there," he said. 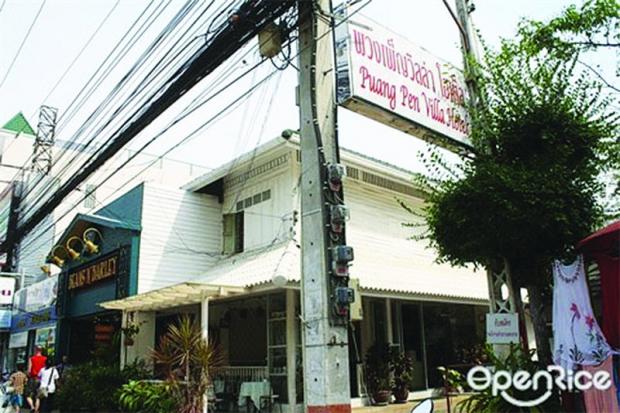 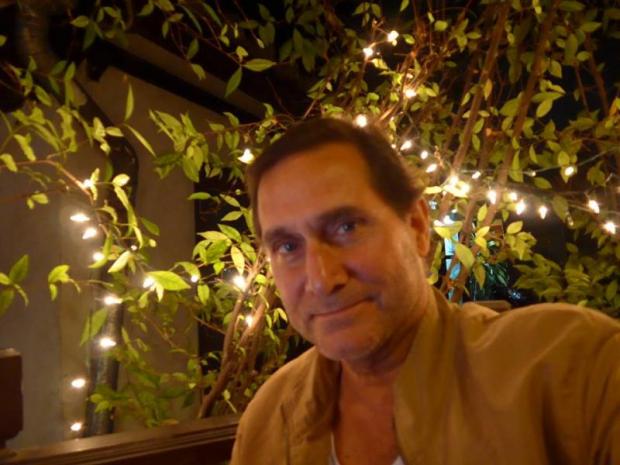 Mystery: Morgue photos of James Hughes appear to show evidence of beating, which was not mentioned in the police report. photos: supplied 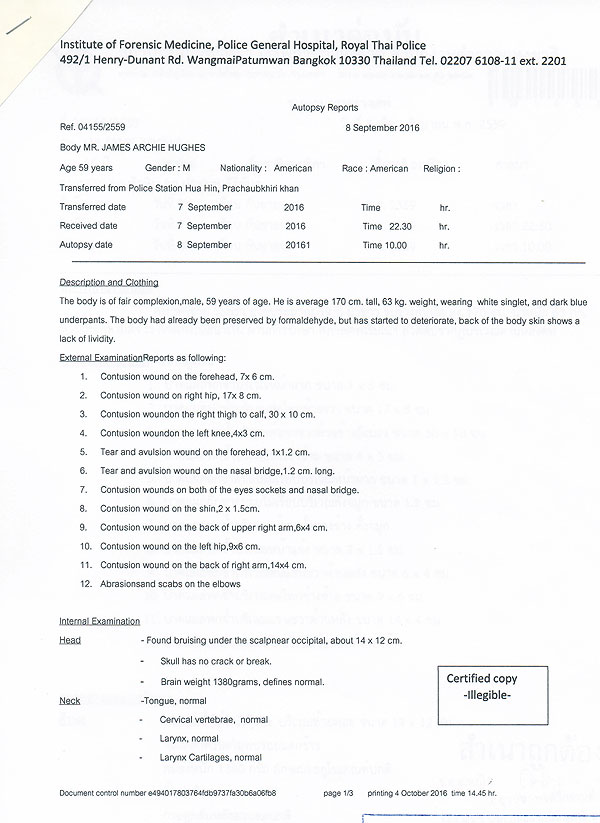 Evidence: This autopsy report shows that James Hughes had several contusion, tear and avulsion wounds as well as an internal bruise in his head. photo: courtesy of Jerome Weinberger

Lecturers, students petition PM against use of violence