A cell of their own
Thailand
Special Report

A cell of their own

True love: A lesbian couple who were together before their arrest for drug offences are trying to maintain their relationship inside the prison. Photos: CHAIYOT YONGCHAROENCHAI

Before being sentenced to prison, Chalom lived her life in a carefree way. She had a full-time job as a hairdresser in a Pattaya beauty salon, which she enjoyed. The only thing she wanted was some extra spending money. With some help from her friends, she became a drug dealer at the age of 26.

Chalom got the extra money, but it was to come with a cost. At 28 years old, she was arrested and convicted on a drug possession charge. She was sent to Pattaya Remand Prison to serve a three-year sentence. 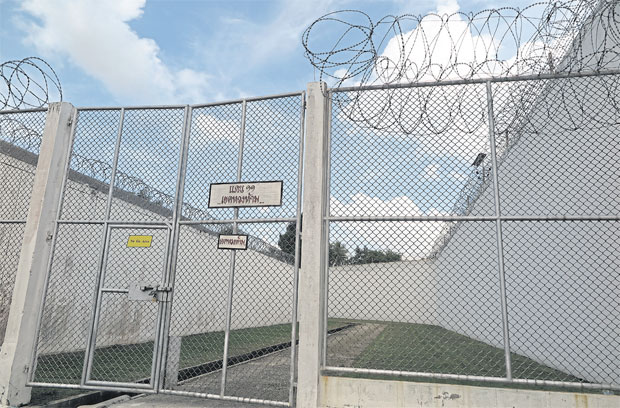 No entry: Double walls with electrified barbed wire prevent escape and outsiders from throwing items into the prison.

Chalom is a 30-year-old transgender woman. Born a man, she underwent sex reassignment surgery to become a woman, from her head to toes. As a beauty expert, her first concern about facing prison time was getting her long hair chopped off and being shaved like regular male inmates.

Much to her relief, Chalom soon found out that Pattaya Remand Prison respects and recognises sexual diversity, placing inmates in cells based on their stated gender and sexual orientation.

This has been the policy in Thai prisons for many years, but only recently has the Department of Corrections announced a plan to create one central prison for people of all LGBT stripes.

BEHIND THE WHITE WALL

Pattaya Remand Prison is located on the outskirts of the city centre. The building is guarded by a large white wall topped with electric barbed wire issuing a steady buzzing noise. 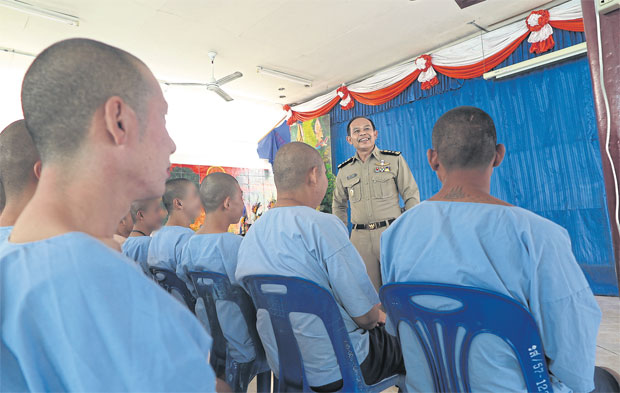 Laying down rules: Watcharavit Vachiralerphum speaks to gay inmates who are segregated from the men’s prison.

The complex can look intimidating from the outside. But inside, the prison's warden and officers lend the place a far friendlier vibe than one might expect.

Every day, hundreds of people drop by to visit their loved ones in prison. They are allowed to talk by phone from behind a window for no longer than 15 minutes.

was led through the prison by Watcharavit Vachiralerphum, the prison's warden. The first step was to pass through security. We walked through a metal detector gate, and all our bags, cellphones, electronic devices and other belongings were deposited before entering the premises. 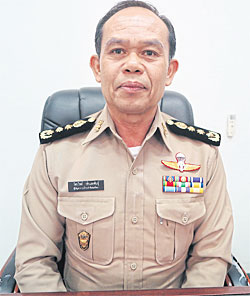 Once past the gate, the prison officer checked our shirt pockets and pants to make sure no hidden objects were taken inside. As we were cleared, the electric gate swung open and another set of gates appeared.

This gate is meant to secure the prison area off from inmates who try to get close to the wall. We passed through and arrived at an office where new inmates were gathering for their screening process.

When Spectrum visited, the prison was home to about 200 new inmates, including both those who were convicted and those still on trial.

Women were lined up on the right side of the office, while the men were on the left. Each inmate was called, one by one, to be personally interviewed by the prison officers.

"What did you do before?" one officer asks. "What are you convicted of? Do you have any diseases? What is your gender?"

The questions are meant to determine what cell placement will suit the inmate best.

Cherry, a 25-year-old transgender woman, was one of the inmates at the screening process on the day Spectrum visited. She is on trial for theft. She hasn't been convicted yet, but court orders state she must be kept in custody until the trial's end.

"I was working as a cabaret dancer at a night entertainment venue," Cherry tells the prison warden. "I'm a post-op transgender woman and I'm healthy."

After her interview, her gender was verified by an on-site doctor. The warden accordingly assigned her to a female wing alongside 13 other transgender women inmates. 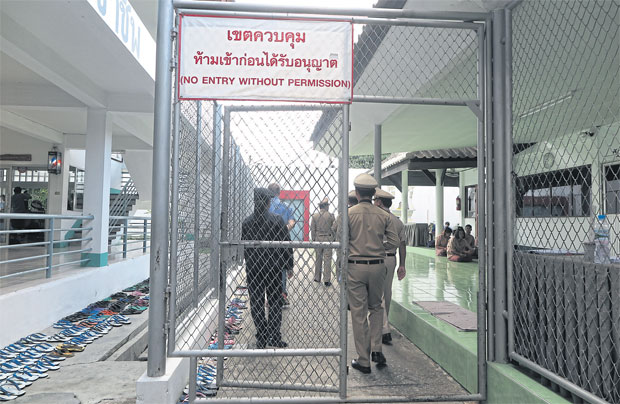 Head this way: The entrance to the female wing at Pattaya Remand Prison.

Pattaya Remand Prison, built 15 years ago, remains in good condition. The building, spread over 23 rai of land in the Nong Pa Lai area of Chon Buri, is clean and well organised.

Mr Watcharavit explains that separating LGBT inmates has been common for many years in Thailand due to the large volume of LGBT inmates.

Among the male inmates, the prison has 155 gay or katoey inmates who have not undergone sexual reassignment surgery.

There are 13 transgender women inmates, who are grouped in with the other female inmates' cell.

Since they met seven years ago, Tik, a 39-year-old Di, and Em, her 35-year-old Tom girlfriend, have never been apart for long. Both of their parents are aware that they live together like any legally married couple. 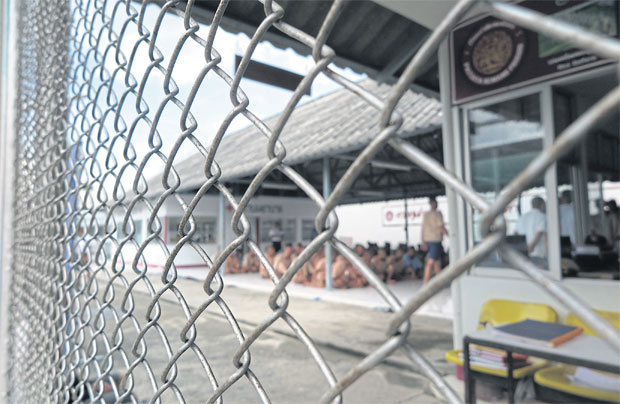 Regulations: Above, the screening process for new inmates. Below, officials interrogate a transgender inmate who had just arrived.

It was about two weeks ago when Em decided that the best way to help Tik get out of her never-ending debt was to sell drugs to partygoers in Pattaya. She began selling drugs to both Thai >> >> and foreign customers, which she did up until the day she got caught.

On a Sunday, the couple were heading to a shopping mall to have dinner. Em told Tik to go ahead to the mall because she had a delivery to do first. Instead, Tik replied: "Anywhere you go, I'll go with you."

So they went to the meeting spot, where they met a customer who had requested methamphetamine (ya ice). As he offered her the money, Em extracted the sealed bag of drugs from her pocket.

The deal was almost done when the police abruptly declared they were under arrest. Em told Tik to run but Tik repeated the same sentence she had said moments earlier: "I'll go with you anywhere." The couple are now in custody under the ruling of Pattaya Provincial Court. They will live in Pattaya Remand Prison until the trial is over. Arriving as a couple, they told the warden they wanted to be placed together.

They were placed in the women's wing. Though they sleep in the same cell, they aren't allowed to sleep next to each other. Tik sleeps on the left side of the cell; Em on the right. "At least we still get to see each other every day," said Tik. "I don't care where we are or if we don't get to sleep side by side. As long as I get to hold her hand every day, that's all that matters to me."

Em added: "All I really need is to have support and understanding from Tik. It's pretty much the only thing that gives me hope." 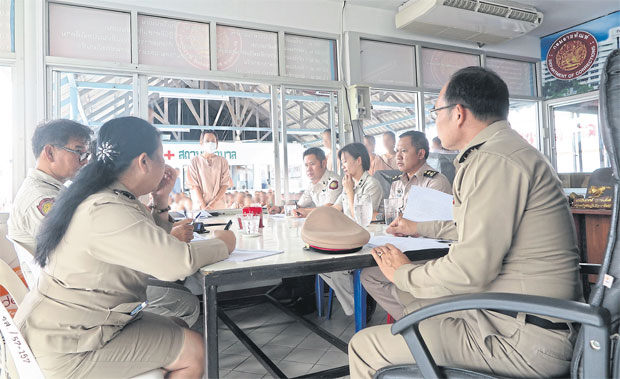 The male wing, where the majority of prisoners reside, is hidden behind a series of metal gates. We first enter the education hall, where about 60 inmates are sitting around in a room with a TV and space to socialise. Each one has their head completely shaved. From behind, they look like regular male inmates, but a closer look reveals a different impression. 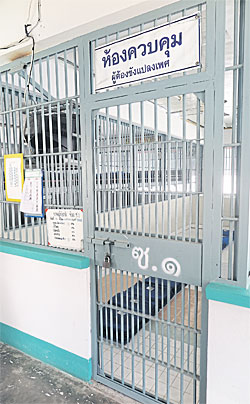 Nearly every one of them is wearing make-up -- pale foundation powder, red lipstick and pencilled-in eyebrows. Prison policy doesn't allow female inmates to wear make-up, but gay inmates can.

"They [the gay inmates] are special," Mr Watcharavit tells Spectrum.

Kratae is a 28-year-old katoey from Yasothon who was once a Pattaya sex worker. He was only a few baht short of paying for his long-desired sexual reassignment surgery when he was arrested for stealing.

He is now serving a prison sentence of four years and three months, and has served three years already. According to Mr Watcharavit, he is a model inmate. He could be granted a pardon to leave prison earlier.

"Of course I was scared when I knew I would have to go to jail," he says. "My main concern was that I would be bullied and raped. But none of that has happened during my three years and four months here as I have my own cell to sleep with people who are like me. It's like living with sisters here. We help each other and watch out for each other."

Bell, an attractive 25-year-old gay man who identifies as a katoey, recently entered Pattaya Remand Prison for a four-year sentence. He has served four months so far.

When he arrived, he told the warden he wanted to live among other katoeys. It turns out his cell had many familiar faces, and he felt more secure as a result.

"At least I felt safe knowing I had many people I already knew in the same cell as me. I was afraid of being sexually harassed, but it's nice that the warden separated us from other male inmates. I feel much safer here," Bell said. 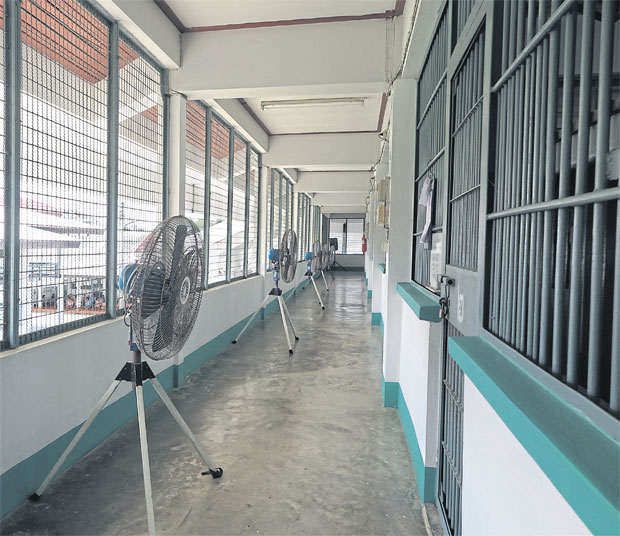 Cooling off: Giant fans improve air flow in the transgender cells, which were built to separate inmates from potential harassment.

The prison was not designed to be exclusionary but to create a safe space for LGBT people facing any threats of verbal and sexual harassment or abuse.

"The reason we separate LGBT inmates from others is not because we dislike them," Mr Watcharavit explained. "It just makes it a lot easier for us to take care of them. We can also stop fights more easily because some inmates fight for the same individual who they get intimate with."

During the day, the inmates are allowed to mix within their own wing. Activities are organised, including baking and sewing. "But at night we separate them from each other," Mr Watcharavit said.

"As we do with male inmates, we separate those who behave more feminine from other male inmates when they sleep. Since we have nobody stopping people from having sex, I don't want to give them the opportunity to engage in sexual stuff."

Earlier this year in July, the Department of Corrections visited Pattaya Remand Prison to check if it met the separation requirements of LGBT inmates. The prison is a model of the functionality of the separation system.

Plans are reported to be delayed by concerns about moving LGBT people away from their relatives to go to one centralised prison.

Mr Watcharavit says he hasn't had any other updates on the plan recently.

"We treat everyone with respect here," Mr Watcharavit says. "We give them their own space and activities to highlight their skills. We have new inmates coming in every month and we will continue this practice to make sure everyone feels safe within this happy prison." 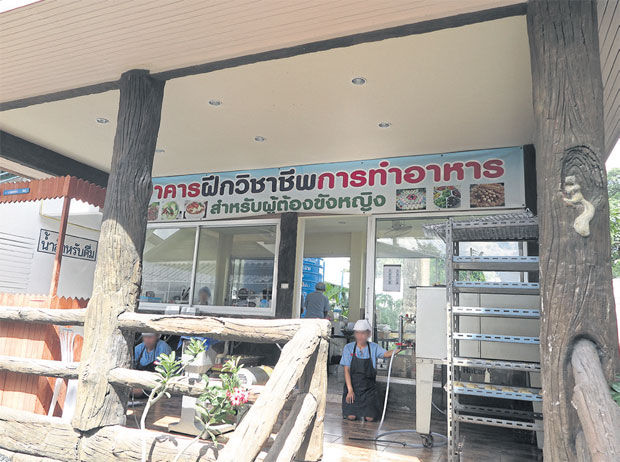 Busy: From below left, occupational training includes cooking, dressmaking and a salon in the female wing. Katoey inmates also work at the salon. 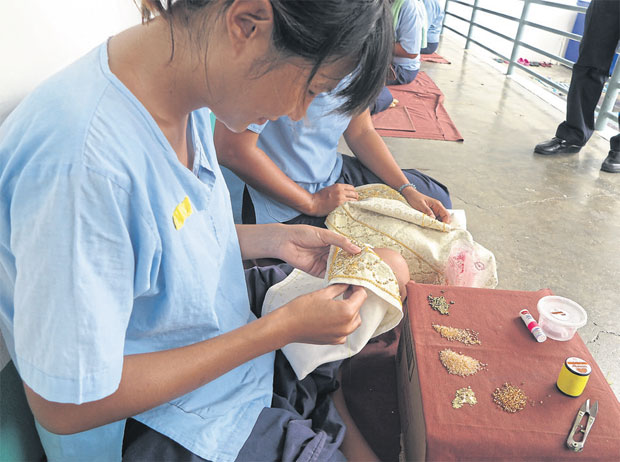 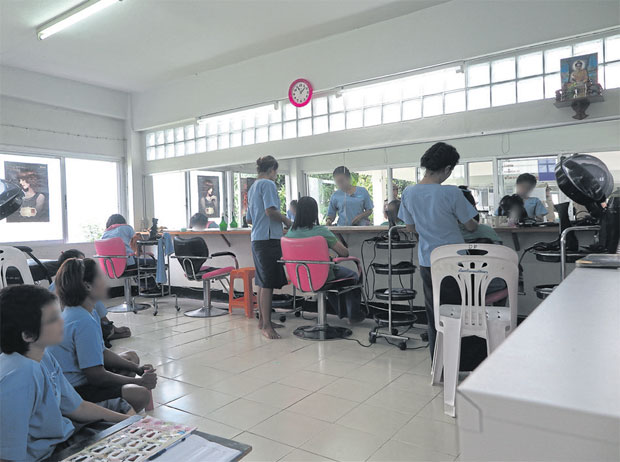