A fortune teller suggested Puripong Suthisopapan and his business partner focus on selling beer when they opened their Be Right Back restaurant in Khon Kaen over a year ago. Starting only with one refrigerator, most of the beer they sold was illegally home-brewed as Thai law prohibits small-scale brewing. 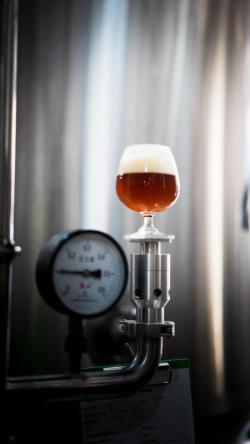 Then they added several beer taps and eventually asked a friend to help brew a batch of craft beer mixed with gaeng om, a northeastern spicy soup, hoping to sell the product.

In an attempt to avoid violating the law, Be Right Back's owners wondered if they should hire an overseas brewery to produce their beer -- a practice known as contract brewing. It turned out their instincts were right.

"The fortune teller told us to choose a brewery whose name contains a number he believes to be auspicious," said Mr Puripong, who teaches engineering at Khon Kaen University. "He said if we brought the beer back to Thailand, it would be sold out."

They found such a brewery in New Zealand and rushed into getting the 1.5-million-baht contract signed last year at the suggestion of the fortune teller. Be Right Back came up with its own recipe -- a fruit-flavoured pale ale -- that will be submitted to the brewery by the end of next month. About 5,000 litres of beer are expected to be shipped back to Thailand in the third quarter.

Only three years ago, the underground home-brewing scene in Thailand started out with less than a dozen brewers. Back then, brewers talked about gathering signatures in an attempt to legalise craft brewing. Conversations centred around blaming the big breweries for their monopoly and how the law prohibited smaller ones from gaining licences.

Now there are estimated to be more than 100 home brewers, and in only one year eight have introduced overseas production, importing beer back into Thailand legally.

"Foreigners used to think of us as home brewers as opposed to real brewers," said Supapong Pruenglampoo, co-founder of Sandport, the latest brewery to gain legal status last month after outsourcing production to a brewery in Taipei. "As soon as we are legal, our voices will be heard more." 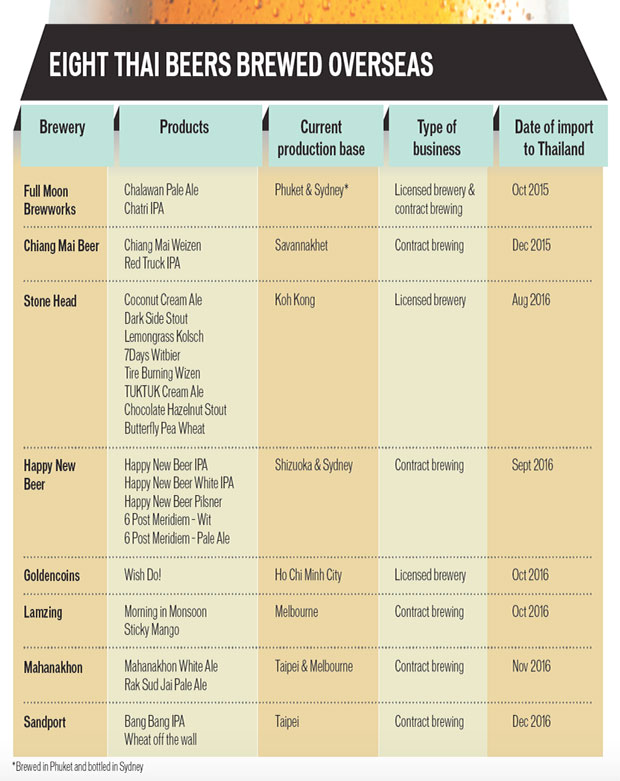 COME AWAY WITH ME

Stone Head was among the first brewers to venture overseas, investing around 20 million baht last year to set up a licensed brewery in Cambodia's Koh Kong province, about 15km from Thailand's Trat province. Last August, it shipped its first batch back to Thailand. 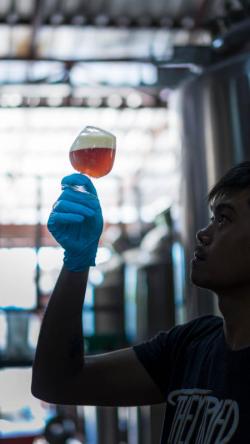 "Expanding your business would be difficult in Thailand when you're always paranoid of being arrested by tax officials," said Danu Thummarat, one of the four shareholders.

Three local brewers took that risk last month when they partook in the first Isan Beer Festival held at Rachawadee Resort & Hotel in Khon Kaen. Over 200 people attended. Of the 40 brands featured at the event, three were home-brewed in the Northeast: Whale Brewery in Kalasin, and Jo+ Beer and Outlaw Brewing in Loei.

Although the law is rarely enforced, with few cases reported in recent years, brewers are not willing to take the risk resulting from large-scale production. The Excise Department's Audit and Law Enforcement Bureau does not have specific figures about the number of cases of people being caught with illegal home-brewed beer.

At Stone Head's brewery, eight types of beer are produced by two brewers. One of them, Sermsak Tangsiripatpron, used to brew his own beer under the brand Soi Beer. Capable of producing 3,000 litres of beer per day, the brewery is currently operating at half the amount, meaning it has spare capacity to rent out its equipment.

Three local brands have expressed interest in contract brewing with Stone Head. One of them is Chon Buri-based Triple Pearl, which expects to have its products shipped to Thailand early next month.

"These brewers come to us because they are fed up with watching their backs," said Mr Danu, who predicts that 30-40 local brewers will follow suit.

While beer in the US is manufactured by more than 4,000 breweries, Thailand's beer market is dominated by two major companies: Thai Beverage, which produces Chang beer, and Boon Rawd Brewery, the maker of Singha and Leo.

"With such limited choices, I think fewer than 100,000 Thais have tried anything other than commercial mass-produced lager," said Mr Danu.

Investing in a brewery would cost at least 4 million baht for a very small factory with custom-made machinery. Contract brewing, on the other hand, averages a net price of around 1.5 million baht for 5,000 litres of beer, including transportation costs and import taxes into Thailand.

"People believe if you own a brewery, you have more commitment and consistency in batches," said Brian Bartusch, the founder and general manager of Beervana, a distributor and importer of beer.

Last year Mr Bartusch and his staff sat down for a team review of Thailand's craft beers that had gone out to contract breweries.

"The quality isn't there yet, but this is the first time they're doing it," said Mr Bartusch, who has worked in the beer industry for 20 years and is a professional beer judge. "When businessmen go to make beer, they are looking at the bottom line first before looking for the recipe."

While Stone Head itself avoids using artificial flavours and uses blue peas and lemongrass as ingredients, limitations in terms of ingredients has become an obstacle for some tenant brewers. Lamzing, for instance, had to use pasteurised mango juice for its Sticky Mango beer brewed in Melbourne.

"They wouldn't let us put in real mango as it could infect their beer, so we had to tweak it a bit," said Lamzing founder and head brewer Phanurut Yookongsak.

Sandport, which began brewing in Nonthaburi early in 2014, faced its own problem with ingredients when it outsourced production to a brewery in Taipei.

One of the beers Sandport used to experiment with was flavoured with kaffir lime -- a fruit native to tropical Asia -- instead of the orange peel used in Belgian beer. But the unavailability of the fruit in Taiwan forced Sandport to drop the label, replacing it with two other products. After shipping its first batch to Thailand last month, Sandport's legal status allowed it to promote its beer at events in Hong Kong and Taiwan.

But for other brewers like June Apipun, the founder of Happy New Beer, contract brewing is an exhausting experience. Back when he was still brewing on a very small scale in Khao Yai, he used to have enough time to go cycling and play football. But now he works until almost midnight, selling his beer and sometimes delivering it himself to restaurants and bars.

"It wasn't as fun and easy as I thought," said the 34-year-old. "If I had to start all over again, I wouldn't have made this decision in the first place."

Happy New Beer outsources production of its Six Post Meridiem brand to Japan's Shizuoka and Happy New Beer in Sydney. Staff have travelled there a few times to oversee production. Its products started being shipped back to Thailand last September.

"Many of our customers stopped ordering our products once when we became legal," Mr June said.

A PLACE FOR ALL

Nattachai Ungsriwong started home brewing after attending a course with Wichit Saiklao in 2014. Now he brews 40 litres of beer once or twice a month at his house before sending it to a few friends and restaurants.

For him, the idea of opening a brew-pub seemed more attractive than contract brewing, which he says gives the tenant brewer limited control in the brewing process.

"But those who do go overseas can actually push forward with change [in terms of the law], because it's something home brewers can't say due to its illegality," said 36-year-old Mr Nattachai, who also sells hops -- a main ingredient in beer -- from his farm in Nonthaburi's Pak Kret district.

The Mitrsampan brewery, in which Mr Nattachai jointly invested with Col Wichit, is expected to function as the country's first "open brewery" where anyone can rent out the facilities. The process has been slow but Col Wichit eventually gained a construction licence after six months.

Construction is due to finish in March pending a licence for production and selling from the Excise Department. If approved, Mitrsampan would join the ranks of the less than a dozen brew-pubs in the country.

Some of Col Wichit's investment is overseas -- he is one of Stone Head's shareholders and is involved in coming up with some of the brand's recipes. But he sees the move as a short-term solution and believes Thai brewers will eventually return once small-scale brewing is legalised.

"That would take time and we need to wait for the right conditions," he said. "All this depends on the leader, the government and the market."

Since October 2014, Col Wichit has hosted weekly classes in an attempt to create what he calls an "army of home brewers".

Col Wichit has been fined three times; the latest in March last year. "If you don't get caught, it means you're not that famous," he said.

"By increasing the number of brands sold in supermarkets and convenience stores, people will start to question the need to brew overseas, thus resulting in a change in the law," said Panitan Tongsiri, a shareholder of Stone Head, the latest brewery to join the group.

Pipattanaphon Pumpo, who founded Goldencoins in 2013 and set up a brewery in Ho Chi Minh City last year with an initial production capacity of 500 litres, also agrees that the chance of small-scale beer brewing being legalised in the near future is very slim.

"The law is unlikely to change soon," he said. "With less than 1% of market share, the craft beer industry has a long way to go."

Mr Pipattanaphon is a founding member of the Facebook page "Craft brewing is not a crime", which was initially set up as a support group when the owners of My Beer Friend and Col Wichit's Chitbeer were fined for selling their products in Chiang Mai.

But not all of those who started off as home brewers have sufficient funds to get started on the legal track. Nontarat Phaicharoen, who started brewing with his friends in late 2014, will have to remain underground for now. His Haus beer is sold on request at two restaurants in Khon Kaen and Nakhon Pathom provinces.

"Back then, everyone was talking about legalising craft beer, but what you have now is that every brewer who used to claim that they were supportive of the movement has already left the country and are brewing legally," he said. "Those who used to stand up to the big guys [large beer companies] are now leaving those without the money to find their own way out."

While countries such as the US and Australia also prohibit selling home-brewed beer, the act of home brewing in itself is considered legal.

"If you want to sell food, you can practise cooking at home before opening a restaurant. But you don't get to experiment with beer, and even if you really want to make an investment, you have to have registered capital of 10 million baht," said Mr Nontarat. "The Thai law is clearly discriminatory." 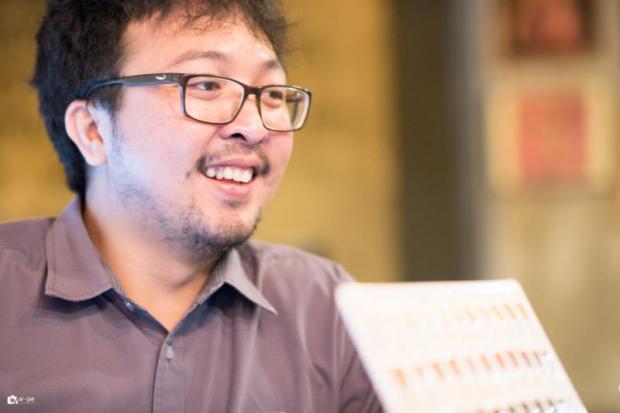 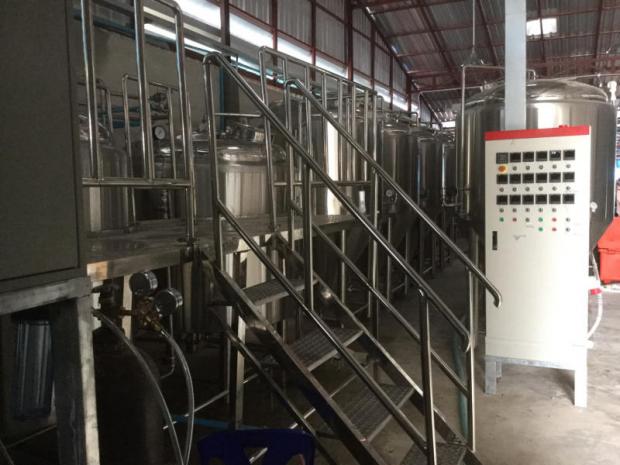 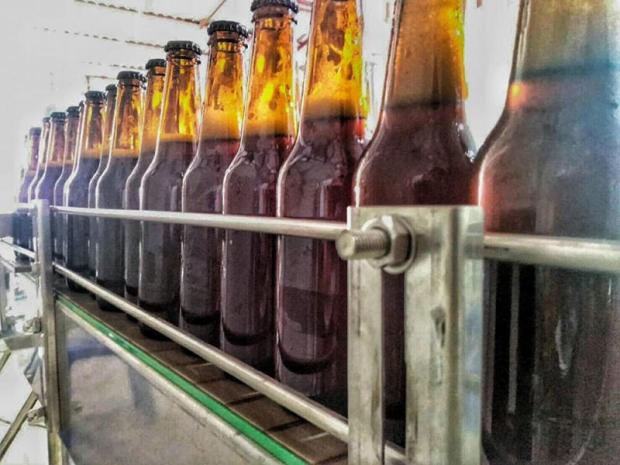 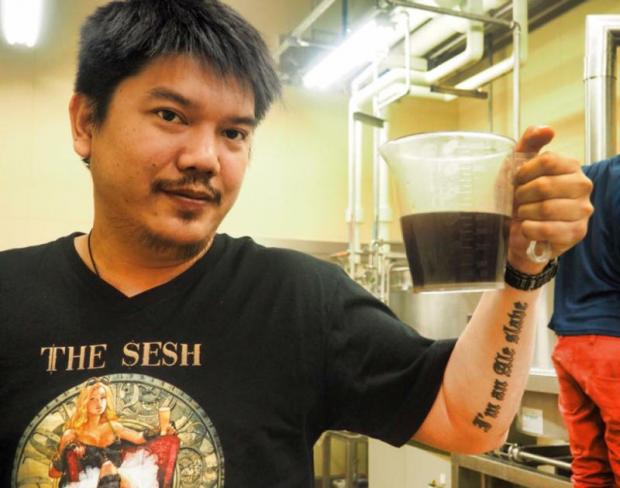 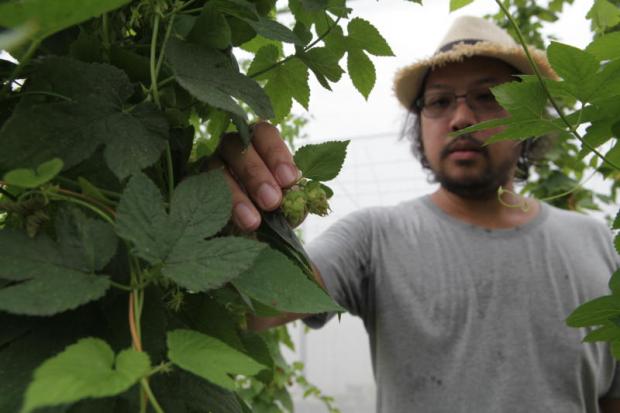 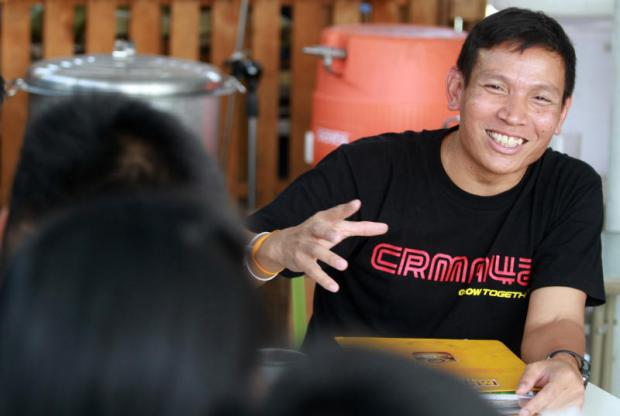