getting his kicks: After a widely watched TV appearance, seven-year-old Suvin, or Nong Pee, became an overnight sensation for his football skills, receiving an invitation to join the national Thai team. (Photos by Taweechai Tawatpakorn)

'All I ever wanted was to play football and own a pair of good football boots," says Suvin, the seven-year-old football sensation, better known among the public as Nong Pee. "The fame and the attention I've got was never my goal."

A guest appearance on Super Jiew, Super 10, a variety show on Workpoint Entertainment Channel, launched Nong Pee into the spotlight only a few weeks ago. He was shown demonstrating his special talent for kicking the ball to strike the crossbar three times in a row.

With the YouTube clip of Nong Pee showing off his trick racking up over nine million views, he's been called the face of the next generation of Thai footballers.

While he seems set to sweep the big leagues, there's one thing that could compromise his ultimate dream to play for the national team. Though his parents have lived legally in the country for several years, Nong Pee remains a stateless child.

Despite being on track to becoming Thailand's next best football star, he lacks legal Thai citizenship.

PEAKING THROUGH THE FENCE

Nong Pee was born to ethnic Mon parents, originally from Myanmar, who are also stateless. They have legally lived and worked in Bangkok for over 14 years at the residence of Vimon-in Arahakul, the woman who first hired them as house help. 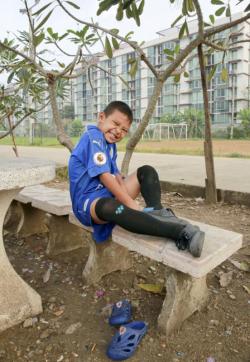 After working for her for a while, Ms Vimon-in brought the family over to work at Kick Off, a football field on Srinakarin Road which she had opened herself.

Win, the 41-year-old father of Nong Pee, is now employed at the field as a caretaker. He mows and waters the lawn, while his wife works as a cook at the field's restaurant.

When Nong Pee turned four years old, Win decided the boy was old enough to bring to work to help out. He would help his parents with various tasks, from serving food and drinks to watering the field.

Nong Pee became popular among people due to his strong work ethic. While he enjoyed talking to customers at the restaurants, he preferred to spend most of his time on the field with his father.

He gained a small audience every time he took a break from work and broke out some ball tricks.

From behind the net marking the field's perimeters, the boy made a habit of watching the skilled football students kick around. He would become motionless as if under some type of magic spell.

CAN YOU TEACH ME?

After watching players train for months, Nong Pee finally gathered up the courage to approach Sombat Leekumnerdthai, the director of the Inter Thailand Football Academy and a professional coach, who worked at Kick Off.

"Coach, I want to be a football player," the then four-year-old Nong Pee said to Mr Sombat. "Can you teach me?"

Mr Sombat had already taken notice of Nong Pee, the son of the caretaker he had often seen peaking through the fence.

"I told him [Nong Pee] to try juggling the ball, bouncing it 10 times in a row without letting it drop. If he could do that, I would agree to teach him how to play football," Mr Sombat said.

Nong Pee leaped at the challenge. However, his first attempts didn't prove so easy.

To teach himself how to juggle the ball, he began observing and taking notes on how other kids pulled it off. Slowly but surely, he got the hang of the trick.

After a few months, Nong Pee could readily hit Mr Sombat's target of 10 consecutive kicks. Later, he upped his record to over 300 unwavering kicks.

At that point, Mr Sombat decided to accept Nong Pee to the academy for free, providing him with a uniform and a pair of football shoes.

Mr Sombat, an ex-member of the national football team, saw a determination in Nong Pee's eyes. He was confident the boy would go far with his raw talent if he got the proper training.

"I normally don't accept anyone below the age of seven to be a part of my academy since I think that's too young to learn, but Pee proved me wrong. For a four-year-old boy, he really had something special about him. His energy and ambition were palpable. I knew I had to give him a chance and so I did," Mr Sombat explained.

Once Nong Pee enrolled in the academy, Mr Sombat realised that the boy learned fast. Despite his tender age, he seemed to be advancing faster than the older kids. He also used his left foot to kick the ball, a unique move Mr Sombat described as a "full energy kick". 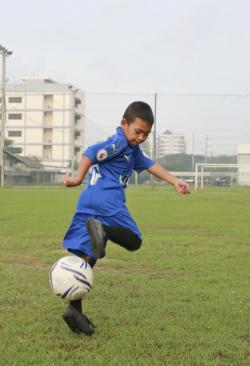 tricks of the trade: Nong Pee trains at Kick Off, a football field on Bangkok's Srinakarin Road, where his parents work as staff.

To keep things challenging, he trained him to take on different positions in the field.

After some time, he decided that the boy would make the perfect goalkeeper.

Mr Sombat gradually introduced harder tasks to training. At the age of five, Nong Pee began practising how to hit the crossbar, a trick that required lots of skill and experience.

It took a full year before he could confidently carry out the trick.

It was then that Mr Sombat told Nong Pee to finally show him the crossbar trick he'd been practising. He asked him to do it blindfolded to show he trusted in his instinct.

On Nong Pee's first attempt, he hit his target over three times in a row.

"He is probably the best student I've ever trained in my life," Mr Sombat explained. "I've never seen any player with Pee's exceptional skills. He is only seven years old and he already plays better than the 15-year-old students I have.

"I'm quite certain that Pee will go very far in his career. I only hope that the fame doesn't make him too confident and that the temptation that comes with it won't pull him away from his focus on the game like with many of my former students. He has more than enough potential to play on the national team."

It wasn't only his talents but his stateless status that made Nong Pee a public fixture and inspirational figure.

Several people have spoken up to support Nong Pee, including many Thai football clubs expressing interest in offering him scholarships and training.

The national team too have stated they want to bring him on board the team when he can qualify for the junior leagues, starting at age 14.

However, the fact that he's not a Thai citizen will make it difficult to do so.

Nong Pee was born in Thailand, but his parents' status as ethnic Mon from Myanmar disqualify him from getting Thai citizenship.

Surapong Kongchantuk, who once worked for the Lawyers Council of Thailand on a subcommittee on the rights of stateless people, migrant workers and ethnic minorities, told Spectrum that Nong Pee's citizenship status would be a major obstacle to joining the team.

"Up until today, no stateless person has managed to get Thai citizenship, no matter how much they have done for our country," Mr Surapong explained.

To leave the country, stateless individuals must be recognised by at least one state as a legal citizen.

"I took care of Nong Mong Thongdee, an ethnic hill tribe boy who won Thailand multiple awards for a paper aeroplane competition in Japan. He got a temporary passport to leave the country, but still he didn't get Thai citizenship," Mr Surapong added.

He explained that Thailand doesn't grant automatic citizenship to non-Thai people born in the kingdom, unlike many other countries.

There are no exceptions to the case.

Although he has the public's support, Nong Pee still faces challenges to achieving his goals.

After Nong Pee's story started seizing headlines, football clubs in Myanmar reached out to the boy, inviting him to come back to his parents' country of origin, according to Mr Sombat. 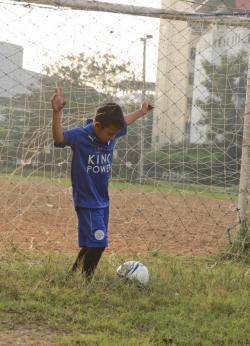 He's declined the invitations so far, insisting that Thailand is his true home. This is where he wants to grow and thrive.

"Playing for the Thai national team is my goal and I will do anything to achieve it," Nong Pee said.

Mr Surapong explained that the migrant child's right to remain in one country is entirely up to them. If Nong Pee wishes to remain in Thailand, he has the right to be here.

"In other countries, I've heard that their government can offer citizenship to famous people who do good things for their countries. However, Thailand doesn't have such laws," Mr Surapong said.

"The recent constitution draft regarding this issue just passed at the end of last year. It hasn't been reviewed yet. So I don't know if this law will be implemented.

"But if it does, it will do many people good, especially those who do great things for our country. We can expect this law to be approved by the middle if this year," he added.

The draft states that any non-Thai person who wants to become a citizen must be at least 18 years old to apply. They must also have a bachelor's degree as the minimum educational level.

While his prospects for the Thai team hang in the balance, Nong Pee's been offered the deal of a lifetime -- to join Leicester City, one of the world's most well-known football clubs. The deal involves the Fox Hunter project, a scholarship fund worth 30 to 40 million baht. 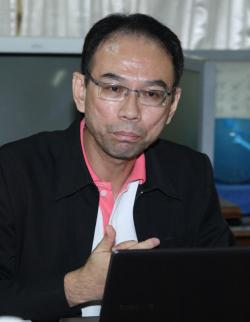 According to Mr Sombat, Leicester City has sent a coach from England to train Nong Pee in Bangkok, alongside Mr Sombat's other students. After two years of training, when he turns age 15, Nong Pee has been invited to go to England to receive a full secondary and post-secondary education, and formally train as a part of the club.

If the UK government was to extend citizenship to Nong Pee to come train and study there, there is a chance he could act upon the acclaimed academy's offer.

"Being part of the national team might be difficult for him at the moment but playing for an international football club seems more feasible for him since foreigners can play in any league for any football club in the world," Mr Sombat explained.

"But to play for the national team, Nong Pee first needs to be a citizen."

Nong Pee is excited about Leicester City's invitation, and sees it as a goal to work towards, although his future remains uncertain.

"It will be a great opportunity to play in other countries but I still really want to represent Thailand as a member of the Thai national team. I will try my best," Nong Pee said. 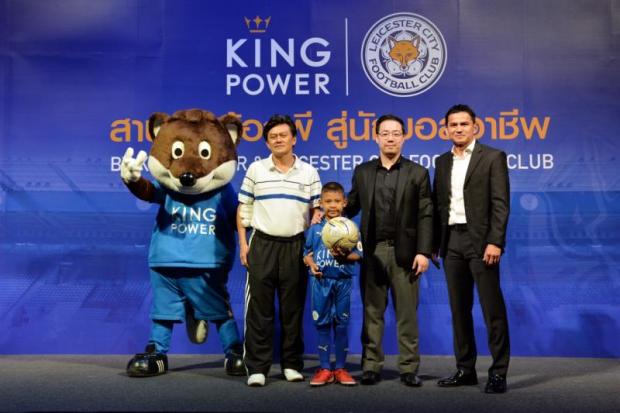 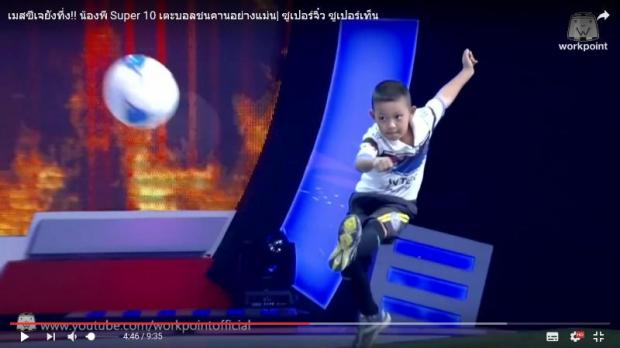 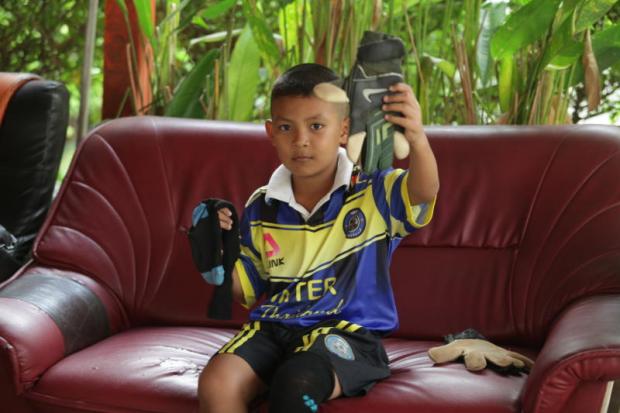 in good hands: Nong Pee was offered free training and a uniform by Sombat Leekumnerdthai, a professional coach, when he was four years old after observing his exceptional abilities. Photos: Chumporn Sangvilert 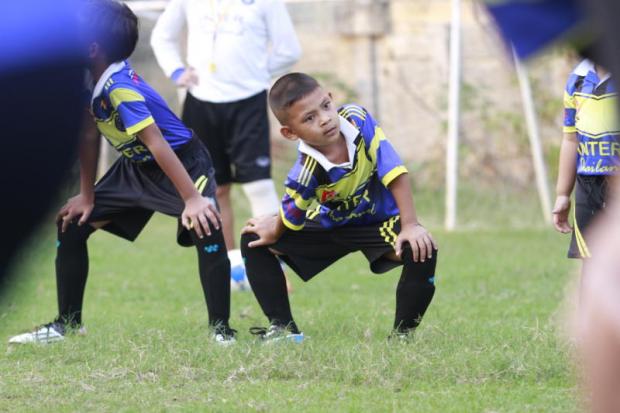 at full stretch: Despite Nong Pee's professional potential, his dream to join the national team is being complicated by his stateless status. 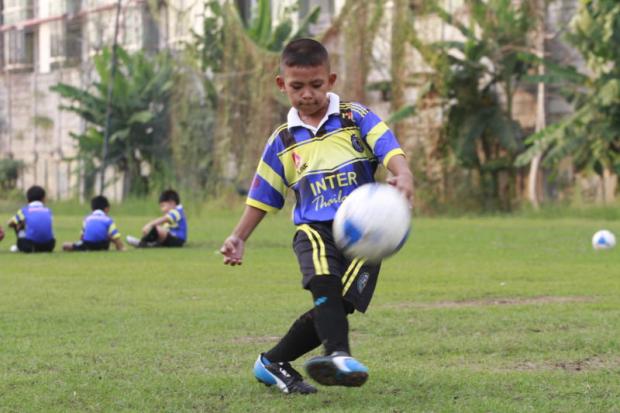