Shakeela, a member of the transgender community, lights a cigarette as she prepares for her party in Peshawar last Sunday. (Reuters photos)

PESHAWAR, PAKISTAN - At a party in Peshawar, the guests' saris twirled as they danced to the music and fed each other pieces of cake, but armed police guarding the door indicated this was no normal carefree birthday gathering.

The revellers were transgender, people who run the risk of violence in conservative Muslim Pakistan where they often work as dancers at weddings and other parties but are rarely allowed to hold their own celebrations.

"It's the first time in a decade that we have openly hosted such a function," said Farzana Jan, a leader of Trans Action Pakistan, a campaign group that estimates there are at least 500,000 transgender people in the country of 190 million.

But an incident last year, when a transgender activist died after being shot six times and then denied treatment at a Peshawar hospital, seems to have softened attitudes.

While there was no written permission for the party on Sunday, there was no ban and police provided security at the front door, patting down guests to search for weapons and blocking those without invitations.

The event was 40-year-old Shakeela's "birthday" party, an event to celebrate the life of a transgender person in middle-age, with guests expected to bring gifts of money to help the person to start a small business or project.

Every transgender person is supposed to get a "birthday party" once in their lives, according to people at the event.

"I was afraid that I may not be able to experience this occasion, as it took us a lot of time to convince authorities to allow us to host it," Shakeela said.

"This is the first and last birthday of my life. It is an important, and the happiest, occasion of my life." 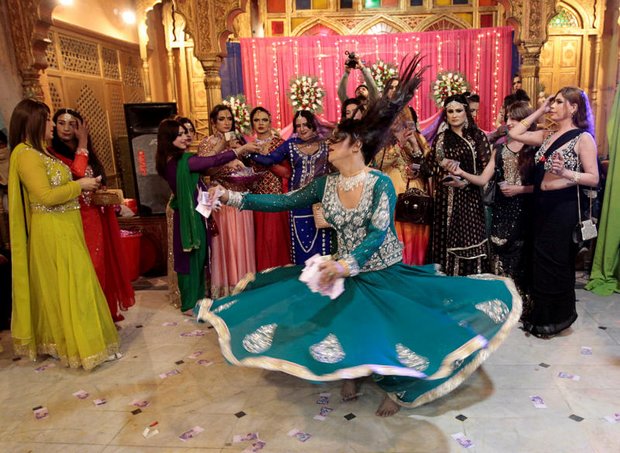 Members of the transgender community attend Shakeela's party in Peshawar.

In much of Pakistan, transgender people are shunned by their families and forced into begging or prostitution to support themselves. Most change their names or use only one name.

However, in recent years there has slowly been greater recognition of their rights.

This month, a court ruled that transgender people would be counted in the national census for the first time. In 2012, the Supreme Court declared equal rights for transgender citizens. A year earlier they were allowed to vote.

But activists say they have a long way to go before they attain full rights and freedom from persecution.