In a country famed for its silk, eri silkworm farmers are seeking to raise the profile of the environmentally friendly fabric

RAVENOUS: Eri silkworms munch on leaves at the lab of the Centre for Excellence in Silk. Paritta Wangkiat

'They are not fully tamed," says entomologist Tipvadee Attathom, picking up an eri silkworm from the floor. "So they can be naughty sometimes." She puts it back in a tray filled with piles of castor leaves.

We are surrounded by layers of trays placed on metal racks in a temperature-controlled lab at the Center for Excellence in Silk at Kasetsart University's Kamphaeng Saen campus, where Prof Tipvadee and her team have conducted research on Samia ricini, or the eri silkworm, for over a decade.

Other eri caterpillars -- in shades of white, light blue, yellow and green -- wriggle in the tray. They are fed on castor and cassava leaves, and they're eating fast.

Soon they will weave cocoons, which will be harvested to make fine and durable clothes popular in the silk market.

In 1974, the Department of Agriculture first imported eri silkworms into Thailand for research.

Some silkworms were passed to Sutham Areekul, a notable academic and former chancellor of Kasetsart University, who experimented with raising the insects in the North.

But they didn't fare well because of the cool temperature and lack of castor and cassava, the leaves of which are the main food source for eri silkworms. The silkworms were passed to Prof Tipvadee in the 1990s.

She embarked on a mission to promote eri silkworms in the Northeast, where cassava was already planted, with the aim to improve local farmers' income by producing eri silk.

"It was difficult at the time convincing farmers to adopt ericulture. People didn't know much about it. It was a new thing with lots of challenges," she recalls.

But that is not the case today. She and her team have expanded the ericulture network to 600 families in 28 provinces in the North, Northeast and Central regions.

The lab of the Center for Excellence in Silk is a major provider of silkworm eggs and know-how to Thai farmers.

In recent years, cassava has been planted widely in drought-prone areas while being promoted for energy plants.

Over 570,000 households have planted cassava, according to the Office of Agricultural Economics. Cassava farms cover a total 8.64 million rai, with the Northeast accounting for half.

Despite the readily available food source for eri silkworms, ericulture faces a challenge: how to encourage clean technology in eri silk production and help it gain more recognition in the era of fast fashion.

Eri silk is staple fibre, unlike the commercial Bombyx mori that is a continuous filament. 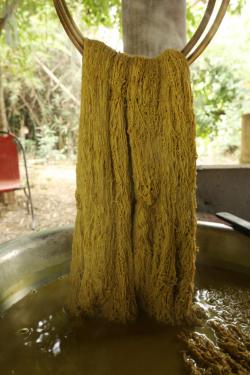 It's used to make durable and supple clothes, known for its thermal property that is warm in winter and cool in summer. The fibre's texture is cottony, not glossy like Bombyx silk, which makes it suitable for everyday wear. However, the champion of the market has always been Brombyx silk -- known as mulberry silk because it's made from the cocoons of silkworms that eat mulberry leaves.

Mulberry silk is referred as a luxury product, often used to make traditional costumes and exported to the high-end market.

In 2013, according to the Department of Sericulture, 71,630 traditional farmers raised mulberry silkworms. Mulberry plantations covered 39,570 rai. About 287,771 kilogrammes of mulberry silk was produced.

Despite the small market share, some communities in Thailand are trying to promote eri silk for the eco-friendly market with support from the Center for Excellence in Silk and the Thailand Research Fund.

They shifted from mulberry silkworms to eri silkworms 10 years ago. Most of them own cassava plantations, so they don't incur costs feeding the silkworms.

The cocoons are sold to silk-spinning factories while some are kept to produce handmade silk yarn used in local products ranging from shirts to scarves and bags.

"The villagers already have skills in raising silkworms and own cassava plantations. More importantly, they were open to adaptation so they could easily shift to eri silk production," says Nittaya Mahachaiwong, a researcher from Fai Gaem Mai, a unit under Chiang Mai University which promotes traditional weaving.

"Baan Tab Klai village is a role model for other communities who want to venture into eri silk production."

A similar model has been established in other communities in Nakhon Sawan, Lampang, Chiang Mai and Chiang Rai.

Over 41 networks of eri silk farmers have been formed to enhance their skill in eri silk production.

Some communities such as Baan Panasawan in Nakhon Sawan's Mae Poen district and Baan Den Wua in Tak's Wang Chao district promote eri silk under the One Tambon One Product scheme.

Ericulture is more accessible for farmers because of lower management costs. A small farm can be located at the back of a house with an open-air shelter.

The eri silkworm takes around 30 to 40 days to produce a cocoon.

Around 5,000 worms can produce 2-3kg of cocoons. After the cocoon harvest, silkworms will either be left to mature into moths or sold as edible insects in the domestic market. Feeding the silkworms offers jobs for the elderly.

Despite the small market, eri silk is believed to have high potential in the international market due to the rising eco-friendly trend.

However, local communities have limited capacity to reach the market, having no access to the international market and a lack of marketing and design improvement.

"Support from relevant authorities is very important. Eri silk needs help to be promoted in the market," says Uraiwan Ninpetch, director for the Center for Excellence in Silk.

Climate change is another problem that threatens eri silkworm farmers. When Southeast Asia was hit by severe drought last year, local producers reported that eri silkworms didn't breed. Their eggs did not hatch. Silkworms eat less in the heat, so they died of weakness.

Cocoons of eri silkworms are open-ended, allowing the moth to leave the cocoon through the opening, so fibres can be processed without killing the silkworms. Bombyx silkworms, however, make a hole when they emerge as adult moths, meaning they damage the cocoons, so they are boiled to kill the larva.

The Indian media recently reported that India's textile minister Smriti Irani was seeking to link eri silk as "peace silk from the land of Mahatma Gandhi" -- the Indian independence leader who promoted silk made from wild cocoons that does not hurt living things.

"Marketing for eri silk is not a big concern. It already boasts advantages over other types of silk because it's eco-friendly and enhances society, which is what high-end brands are looking for today," says Pajaree Kewcharoenwong, vice-president of Saraburi-based Spun Silk World Co.

"What we need is better supply chain management."

Spun Silk World is the only Thai factory that process eri cocoons into silk yarn, accounting for only 1.5% of the company's production.

In 2012, the company introduced eri silk into its factory by buying cocoons from local farmers.

It took around a year to develop a spinning technique for the eri fibre.

The company built a separate room for eri silk to prevent contamination from other silk production processes.

It supplies eri yarn to four top global fashion brands, some of which use the fabric for their spring and summer collections.

"Eri silk is coming. Its texture meets demand from foreign consumers who prefer a subtle rather than a glossy texture," she says.

"Everybody wants a kind of beautiful cloth that is functional for everyday wear."

Despite the positive feedback, the company realised that silkworm farmers can't produce cocoons on an industrial scale, and the quantity of cocoons is unstable.

The company has to store cocoons until it receives orders from customers.

Raising eri silk to the industrial level, says Ms Pajaree, requires improvements in silkworm farming methods such as reducing the animals' death rate and successful breeding that can provide eggs.

This will need the involvement of many sectors and improving eri silkworm breeding to adapt to climate change.

At the back of a house, Nitat Jantorn, a fabric maker and weaver of Baan Tab Klai, boils water and puts some bark into the pot.

The water turns yellow. The eri yarn is dipped into the coloured water. 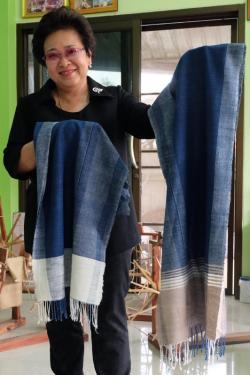 ECO-FRIENDLY LUXURY: Tipvadee Attathom displays fabrics made from eri silkworms raised at the Center for Excellence in Silk. PHOTO: SUPPLIED

He's making natural dyes using knowledge he obtained from local lore and years of experimenting -- he must know the exact quantity of each ingredient and the age of the plants.

It will take several hours for the yarn to absorb the colour, and several more days to weave the fabric.

The entire process is described as slow fashion -- needing skill, knowledge and environmental concern to make a good piece of fabric.

Mr Nitat began studying how to make natural dyes in 2004, driven by his allergy to chemical colours that often caused rashes and breathing difficulties.

Some dyeing techniques were acquired from his grandmother, a descendant of the Lao Vieng who migrated from Vientiane to Thailand's western border in the past.

They are famed for traditional weaving, with unique techniques and patterns that identity the community.

Patterns have meanings; for instance, embroidered elephants and horses symbolise being away from home, telling the story of the Lao Vieng migration.

The introduction of eri silk into his community allows him to hone his craft, sometimes mixed with cotton, to add value to his handmade products.

However, the local skill of making fabric has been threatened in recent years.

Some farmers stopped ericulture during last year's drought because their worms died in the heat.

Many plants that used to make natural colours have disappeared due to deforestation or urbanisation. And many young villagers are not eager to learn weaving.

Consumers may not appreciate the meaning behind each piece of fabric.

"We need to come up with new products that fit with the modern age," says Mr Nitat, adding that local people lack marketing skills.

What he has is a story of fabric, about why, how and who made it -- if only wearers see that it matters. 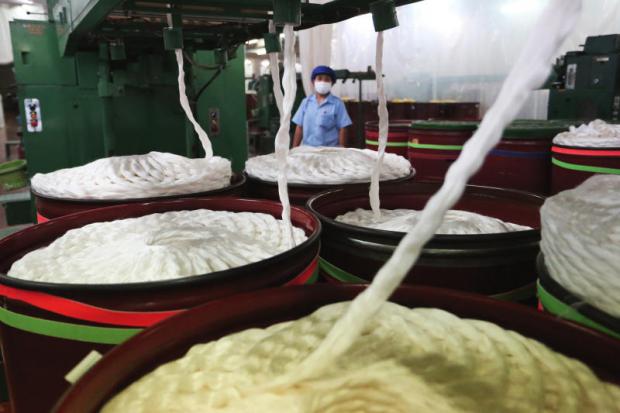 NOW THERE'S A YARN: An employee of Spun Silk World watches over the machinery. Paritta Wangkiat 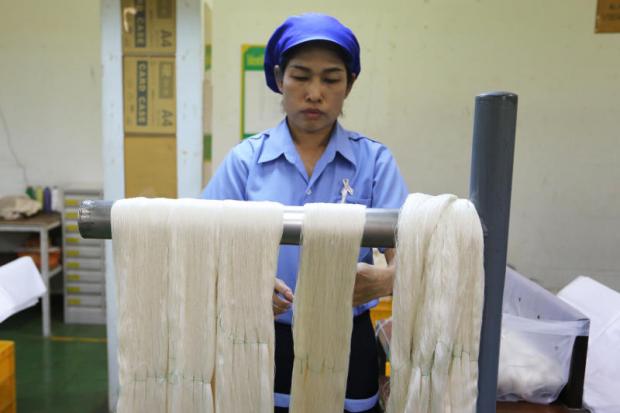 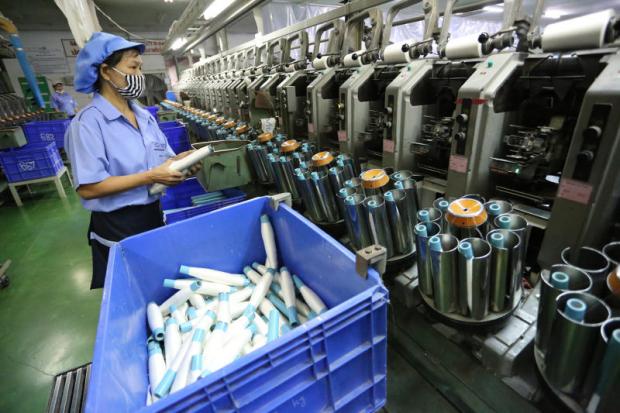 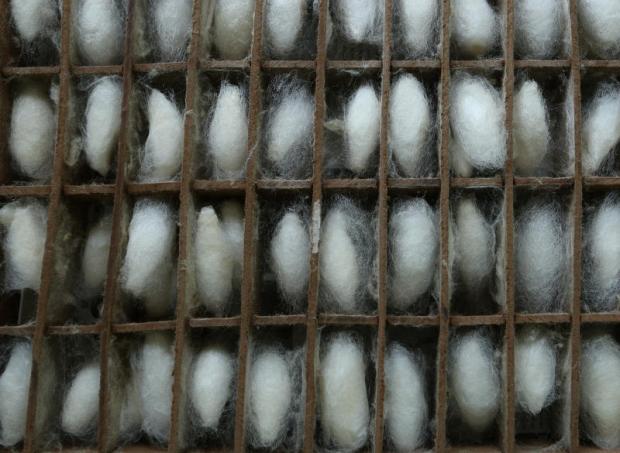 LOOKING COSY: Eri cocoons produced by silkworms in a lab at the Centre for Excellence in Silk at Kasetsart University's Kamphaeng Saen campus. PHOTOS: Paritta Wangkiat 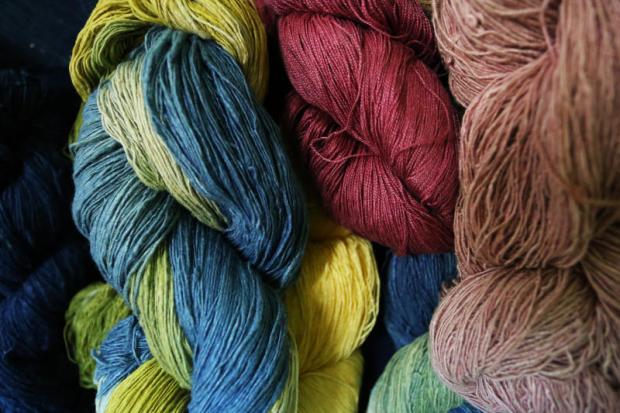 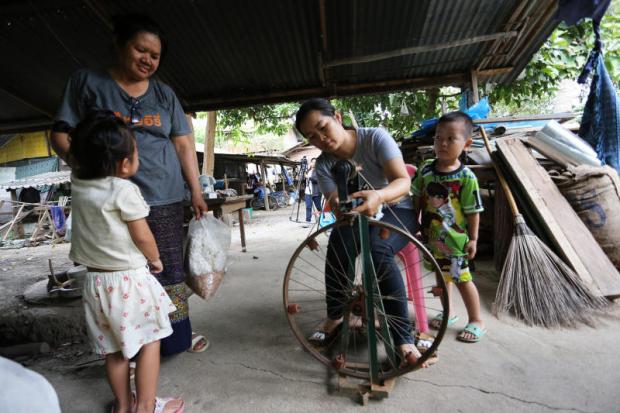 THIS IS HOW WE DO IT: A family of eri silkworm farmers watch a friend spinning eri silk cocoons into yarn at Baan Tab Klai village in Uthai Thani's Ban Rai district. PHOTOS: Paritta Wangkiat